What's up, doc? Trees in flames?

An alert reader sends us the information that the Ontario Medical Association just proclaimed that “Doctors are trained to evaluate science, and science proves that human-made climate change is a reality. We have seen the heightened effects of climate change across the planet through extreme weather, crop failure and the burning of forests… A healthy population requires a healthy planet, and Ontario’s doctors are calling for positive action to be taken immediately on climate change to mitigate its severe consequences on human health and well-being.” Since expertise is now apparently portable across disciplines, if you’re unable to see a doctor because Ontario’s health system is collapsing under its own socialist weight, maybe you should ask a meteorologist for an opinion on that cough. But we do sincerely hope OMA members retain some semblance of scientific training, notwithstanding that everything they said about “heightened effects of climate change” was wrong.

This gem of obtuse ignorance masquerading as settled science was contained in its Prescription for Ontario: Doctors’ 5-Point Plan for Better Health Care (on p. 9) and that document in turn was also included in their “Putting Health Care First/ 2022 Pre-budget Submission/ January 26, 2022“. But if doctors are so all-fired “trained to evaluate science” they should have looked at some data.

We have had a lot to say about extreme weather, including the regular debunking of claims that it is getting worse in Canada. (Which, in the case of extreme rainfall, neither Environment and Climate Change Canada nor the IPCC claims.) As for world crop production it continues its decades-long pattern of growth. Canada’s own agricultural records go back over a century and aren’t hard to look up. Not to be all science-y but this is what they look like: 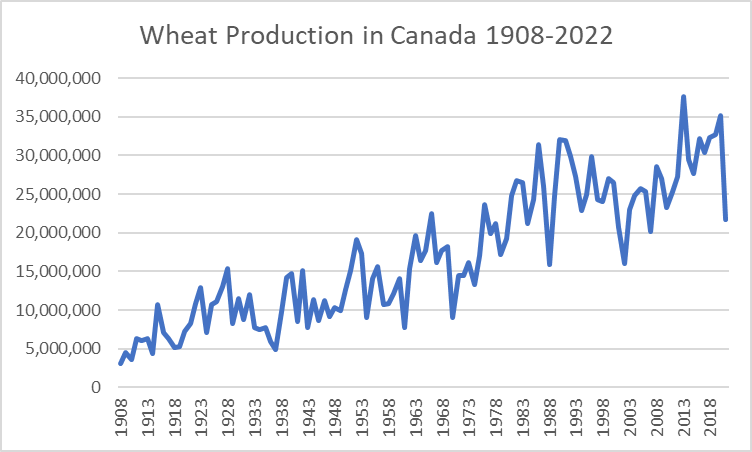 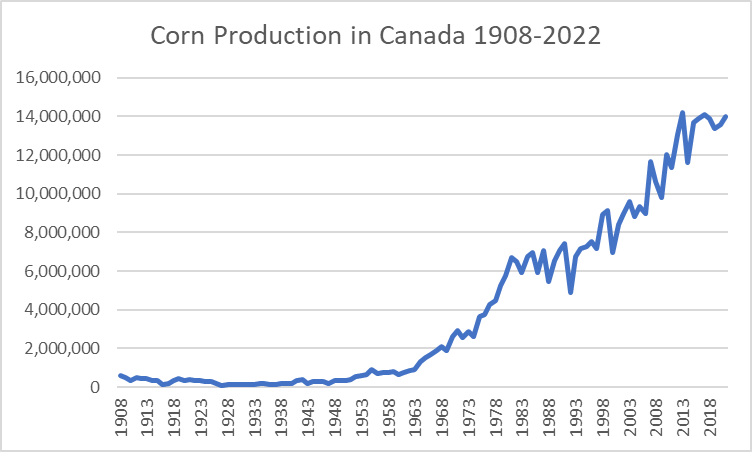 And because man can’t live on crops alone, here are eggs: 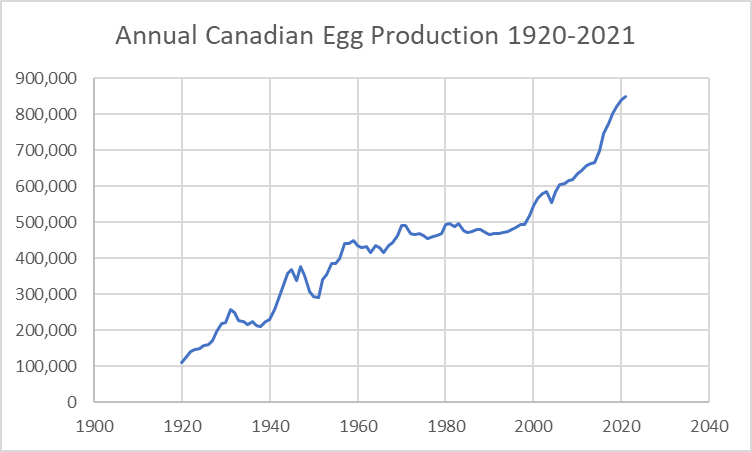 To the science-trained OMA this looks like failure. When it comes to global forest fires, needless to say the OMA don’t have any data to offer, but we do. They do manage to refer to some Ontario data:

We checked the facts. And according to the National Forestry Data Base there were, in fact, just under 1,200 forest fires in Ontario in 2021. Which was more than the number in 2020. And less than the number in 2018, 2012, 2011, 2006, 2005, 2001, 1998, 1997, 1996, 1995, 1992 and 1991, the record showing a striking downward trend over the past 30 years. Also the total area burned in Ontario has been declining fairly steadily since 1974. Of course some years are worse than others but it’s trends that count in, um, science. And as it turns out, in 2022 Ontario has thus far seen far fewer forest fires than in 2021, something trained climate scientists would acknowledge and from which they would draw something resembling appropriate conclusions. (Instead the Toronto Star declared that in a year with few fires “Forest fires are driven by weather” although should 2023 be bad, we can expect them to be driven by climate again.)

But never mind. The authors of that Prescription for Ontario also ignore economics to wax lyrical about the power of central planning to fix the appalling problems in Canadian health care caused by central planning. And if the provincial government did centralize everything the doctors would rave about the suppression of local initiative by front-line providers.

The document also ignores the ban on clichés recommended by every good manual on rhetoric, with everything from “Give every patient a team of health-care providers and link them digitally” to “Health care also must be built around the principles of access, equity, efficiency and integration” by, one presumes, closing one’s eyes, clicking one’s heels together and saying ad nauseam “increase the Canada Health Transfer”.

Also “Equity and access, and climate change are major factors underpinning health and health outcomes”. And of course “Health-care planning should always be done through an equity lens, and in a culturally sensitive way that breaks down barriers for marginalized people, particularly racialized, Indigenous and LGBTQIA2S+ communities, and those whose first language is not English” and “Examples of the social determinants of health include income, education, food insecurity, housing, social inclusion, early childhood development and access to affordable health-care services.” So basically a piece of cake once we also get world peace. And better weather.

Omitted in all the OMA verbiage is the observation that climate policy, not climate change, is wrecking real people’s health in the real world in real time. Something is pushing up energy prices relentlessly and it’s not the failure to deliver health care in Kernewek.

Previous PostWe're talking about people
Next PostPhilly turns to cheese steak as...

One comment on “What's up, doc? Trees in flames?”