Another unshakeable belief among climate alarmists is that wildfires are increasing around the world due to climate change. We already did some debunking of the Great Amazon Fire scare and today we’re going to broaden our perspective out to the world as a whole. Courtesy of the European Space Agency we can see global average area burned as measured by a group of satellites going back as early as 1982 (h/t Zoe Phin).

The area burned drifted downwards until the early 1990s, then went up for about 10 years, leveled off and since 2013 has been rapidly dropping. The series ends in 2018, where it sits at the lowest point since the early 1990s. Behold, the climate emergency.

No? Well, data analyst Zoe Phin retrieved the longest of the data sets and plotted it in a more compressed format so the variations are easier to see. 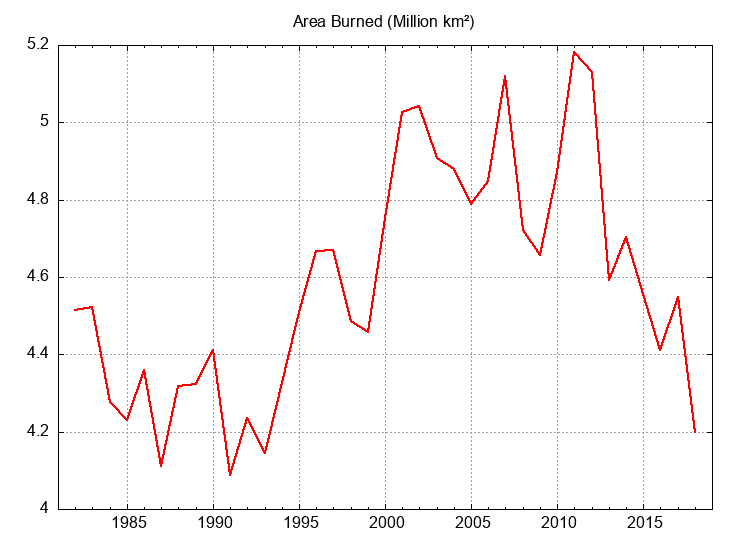 Still no emergency. But just because global wildfires are dropping rapidly doesn’t mean the usual suspects will stop ringing the fire alarm bell. In February the UN Environment Program blasted governments for not being prepared for the problem of soaring wildfire rates, and an outfit called DW Media has a very serious-looking web page explaining how climate change is causing wildfire numbers to go up.

We can’t cure whatever it is that causes such determined cognitive dissonance in the alarmist community, but we can at least give you the numbers so you can see for yourself what’s happening and decide which theory you think is holding up better in light of the facts.

Previous PostOf rising seas and cities
Next PostCDN by the Sea: Gibara, Cuba