This just in: your house is not on fire

Periodically viewers and readers comment about the annoying warnings social media giants put on our videos not to believe a word we say. For our part we find it funny. But also instructive. For instance when Facebook offers people a chance to “See how the average temperature in your area is changing. Explore Climate Science Info”. Which then takes you to such vital pseudo-information as “The cause of climate change is widely agreed upon in the scientific community” and “The cost of renewable energy is dropping rapidly” and “Overall, polar bear populations are declining because of global warming.” And then, unusually, they managed strike four because, in our case, we also got this chart which, you’ll notice, proves the exact opposite of what the thick black line claims. It shows no warming since 2000, none between 1950 and 2000, and a one-time jump. Wonder what “the scientific community” says about that one. “Nice black line,” probably. 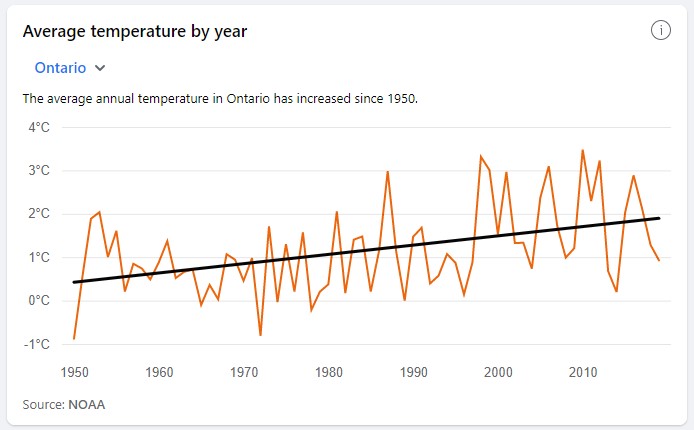 We won’t get sidetracked here into the important question whether Facebook, YouTube and so forth are publishers with broad discretion over content and also responsibility for it, or merely platforms that allow third parties to broadcast anything that isn’t overtly criminal, grossly offensive or contrary to established orthodoxy. But we will point out that this chart is pretty childish.

We will also point out that we checked the source of this data and it was from the NOAA, which is reputable apart from its habit of adjusting numbers to show warming where the raw data doesn’t show any. But also “This section includes data analysis conducted by the Resource Watch team within the World Resources Institute (WRI), a global research organization.” Which is definitely taking sides, because the WRI says of itself “With focused effort and bold action, we can drive systemic change that will improve lives, drive economic growth, reduce inequity, and ensure the natural world can thrive.”

Of course they claim their research is objective, rigorous and peer-reviewed. But if you’re wondering how often they find that climate change isn’t as bad as we thought, or the causal link with human activity isn’t straightforward, well, we invite you to write to them and ask.

Previous PostGreat Barrier Reef, RIP
Next PostMeanwhile back at the ranch

8 comments on “This just in: your house is not on fire”