Everybody knows: the glaciers of Montana are disappearing

At Glacier National Park in Montana USA, the park staff put up signs a decade ago warning visitors that due to global warming the ice would be gone by 2020. 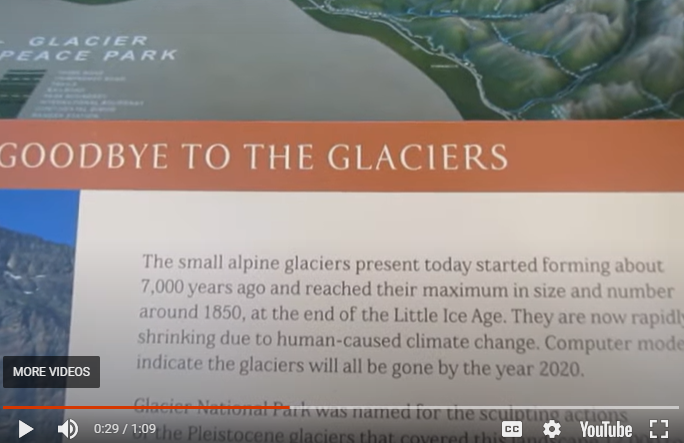 Today the glaciers are still there, it’s the signs that are gone. Or have been rewritten to refer vaguely to “future generations” rather than 2020. Contrary to what everybody knows, or thinks they know, the glaciers in Montana are stubbornly refusing to melt on demand.

Over at her blog Climate Etc., Judith Curry has posted an essay explaining the history of the Montana glaciers and the complicated process that leads to them growing or shrinking. (On which see also this item.) As the sign shown above indicates, the glaciers started forming about 7,000 years ago. Glacier National Park was, according to Curry, “virtually ice free” 11,000 years ago, but then glaciers began growing and as of 6,500 years ago they have been present continuously in the Park boundaries. However it was during the Little Ice Age after 1400 that they really started advancing rapidly and by 1850 had reached their maximum size since the previous ice age. Thereafter they began the process of retreat which continues to the present.

Previous PostCan you say Meghalayan?
Next PostCold conditions in the Gulf of St. Lawrence

4 comments on “Everybody knows: the glaciers of Montana are disappearing”