We know it because all the media coverage of Hurricane Ian says so. There are even #hashtags about it on social media, which is like proof, man. So what exactly is the claim? That Ian wouldn’t have happened if people in Florida all drove Teslas? Er, no. That there were no hurricanes before greenhouse gas emissions? Wrong again. That they are becoming more frequent? The IPCC says otherwise, namely that US landfalling hurricanes are no more common now than a hundred years ago, a position also held by other experts. That models predict more and stronger hurricanes? But that’s not what the modelers say. What exactly are the alarmists trying to claim? And, more importantly, what do the data show?

A March 2022 paper in Geophysical Research Letters reviewed the data on global hurricane records from 1990 onwards, which confines the analysis to a period when there has been reliable satellite coverage. They looked at numbers of hurricanes and also the standard measure of the combined wind strength, called ACE or Accumulated Cyclone Energy. The results were, quoting verbatim:

“This study investigates 1990–2021 global tropical cyclone (TC) activity trends, a period characterized by consistent satellite observing platforms. We find that fewer hurricanes are occurring globally and that the tropics are producing less Accumulated Cyclone Energy—a metric accounting for hurricane frequency, intensity, and duration. This decreasing trend has primarily been driven by a significant downturn in western North Pacific TC activity—the tropical basin that typically is the most active. Short-lived named storms (TCs lasting ≤2 days) and the number of times that TCs quickly strengthen (≥50 kt in 24 hr) have increased significantly since 1990. Identifying more short-lived named storms is likely due to improved sensors, while increases in rapidly intensifying storms may be driven by more favorable conditions. Global damage from TCs has significantly increased as well, likely largely due to population growth and increased value of coastal assets (physical structures and non-physical risk exposure). The trend during the past 32 years toward a more La Niña-like environment has favored North Atlantic TC activity and suppressed North and South Pacific activity. Since the Pacific Ocean normally generates much more activity than the Atlantic, global TC activity has generally trended downward.”

Remember we’re talking about global climate change. One strong hurricane in Florida isn’t the whole story. The big picture, taking into account the Pacific region as well, is fewer storms and lower ACE. But what about Ian?

Climatologist Roy Spencer has gathered data on all the major hurricanes hitting Florida since 1903. The chart shows each one according to its windspeed at landfall. 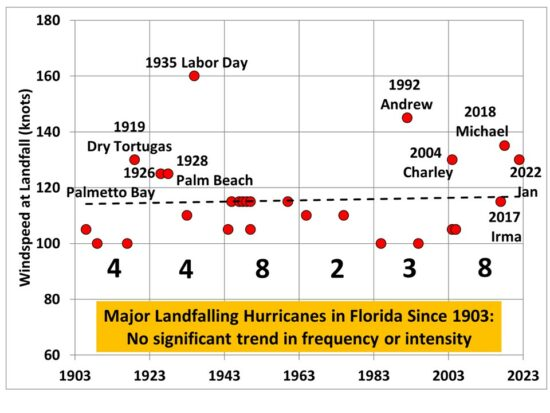 Ian comes in at a respectable 130 knots, approximately. Not as powerful as Michael, Andrew or the 1935 Labor Day storm. Still, a devastating storm, and our thoughts go out to the people of Florida now faced with an enormous task of cleanup and recovery. But remember the 2022 Atlantic hurricane season, as of mid-September, had been quieter than normal, with total cyclone strength half the expected value.

Many hurricanes formed but fizzled out before they made landfall. Pointing to one storm in one place that fits the narrative and ignoring all the others and all the regions that don’t isn’t science, it’s ambulance-chasing. “Everybody knows” it doesn’t count when you only predict something after it already happened.

Previous PostLong live the King, provided...
Next PostWhat blackouts could do to German electronics

One comment on “Everybody knows: Hurricane Ian shows climate change is making the weather worse”