At the risk of boring CDN readers, who know all these things already, we bring you the latest essay by Roger Pielke Jr. called “What the Media Won’t Tell You About Hurricanes”. And he ought to have added that the IPCC and the government won’t tell you either, because he goes over critically important datasets that are not just ignored by reporters but left out of official reports too. In brief, there are no upward trends in global hurricane counts over the past century, the experts don’t claim there are, neither are the damages getting worse once you control for the amount of buildings and other stuff now sitting in hurricane zones, and on all the rest of the science topics, the experts are divided because there isn’t enough data to settle the science. With hurricane season getting underway, it’s worth going over these things again.

Beginning with the words of the IPCC itself in its most recent report, as quoted by Pielke Jr.:

“[T]here is still no consensus on the relative magnitude of human and natural influences on past changes in Atlantic hurricane activity, and particularly on which factor has dominated the observed increase (Ting et al., 2015) and it remains uncertain whether past changes in Atlantic [Tropical Cyclone] activity are outside the range of natural variability.”

The problem, Pielke explains, is that the data are too noisy and varied to detect any patterns, let alone to attribute them to greenhouse gases. Which brings him to his second point: “The IPCC has concluded that since 1900 there is “no trend in the frequency of USA landfall events.” This goes for all hurricanes and also for the strongest hurricanes, called major hurricanes.” Pielke notes that there was an interval from 2006 to 2007 when no hurricanes made landfall in the US, a historically bizarre event. But for a lot of young “climate journalists” who came of age during that interval, it caused them to think that’s normal. Now that we’ve had a few normal years, i.e. years with landfalling hurricanes, the novice reporters think pandemonium is breaking loose. In reality the data look like this: 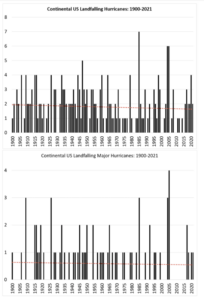 Remarkably, as Pielke points out, these data series “have never been presented in IPCC or U.S. National Assessment reports, and I cannot recall ever seeing it in major media reporting on climate change (though I am happy to be corrected). One might think that such basic information might be of broad interest.” Yeah, you’d think. If the goal was to inform the public. If the goal was to frighten and mislead the public then those are the last charts you’d expect to see.

Pielke then discusses the detailed characteristics of hurricanes, such as “rainfall intensity, speed of storm movement, latitude of storm formation, pace of intensification, length of seasonality” and so forth. Do GHG’s affect any of these things? He notes that there’s no agreement on it. You can find a scientist on either side for any of these topics, or in other words journalists can cherry-pick their experts to get whatever message they want. But the insiders know the science is nowhere close to settled.

As Pielke also says, “on the question whether the most intense tropical cyclones will increase worldwide due to greenhouse gas forcing, expert views range widely, from low confidence to high confidence, with many arrayed in between. And if you look across model results, is even plausible under a range of scenarios that tropical cyclones become less frequent and/or less intense. A diversity of legitimate understandings is of course OK – this is how science often works in many areas. If the topic were simple, we wouldn’t need much science.” Still, a diversity of accounts of whether there are more hurricanes is a problem, as are dogmatic theories about how we caused something that didn’t happen.

Finally, Pielke points out that one thing we do know is how to adapt to the threat of hurricanes. The worst hurricanes in terms of human and economic damages happened long ago. With advanced warning systems and better building practices they do relatively little damage now, despite all the extra buildings in their path.

Yes, it’s not the first time we’ve pointed these things out. Nor will it be the last. Pushing back against the false alarmism on hurricanes might seem like shouting into a hurricane. But as long as people keep repeating errors we’ll keep refuting them, and expressing gratitude to those few scientists like Roger Pielke Jr. who keep putting the data out there and reminding people what the science says.

Previous PostMore evidence of things not seen
Next PostCDN by the sea: Kigiliah, Russia

3 comments on “Pielke Jr. on hurricanes”