Everybody knows: prairie heat waves are getting worse

Thanks for the leads for our new “Everybody Knows” series, where each week we look at an alarmist claim in the media that is presented as so self-evidently true that nobody, least of all a journalist, should bother checking whether it is supported by any evidence. This week alert reader Gary Puckering noted an August 16 story on the CBC about a heatwave coming on the Canadian prairies “with temperatures forecasted to exceed 30 C, triggering heat warnings”, which sounds pretty bad, and a harbinger of worse to come because of you-know-what: “A heat wave is building across the Prairies and climate change means we can expect more.” But are summertime temperatures above 30° C unusual? There are records of daily temperatures on the Canadian prairies at least back to the 1940s, and to the late 1800s in some places, so we checked.

Puckering pointed us to the weather station at Estevan, Saskatchewan, where the thermometer is, to this day, located well away from built-up areas so it should provide a good record of prairie conditions, at least in southern Saskatchewan. The main Environment Canada record goes back to 1944 but the historical archive contains records back to 1900. And Puckering had this to say about the post-1944 data:

For the purposes of this exercise, I looked for consecutive 3 and 5-day periods when the temperature was 30 C or higher.

As for trends, they are downward for both 5 and 3-day heatwaves per year: 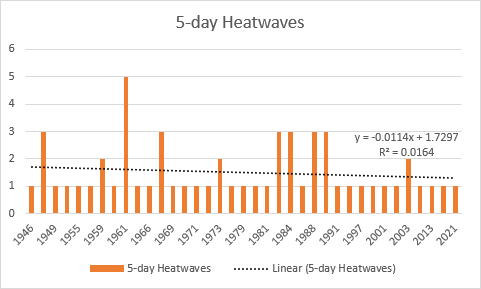 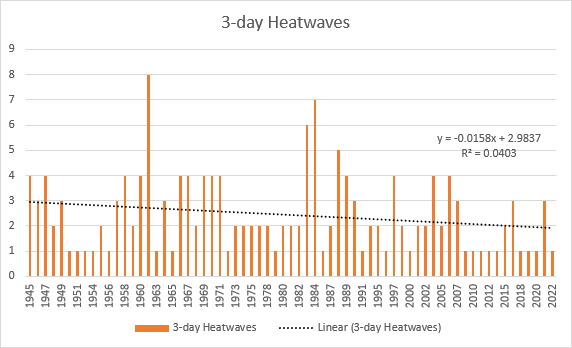 The other metric I analyzed is the number of days for each heatwave. For heatwaves lasting 3 days or more, here’s what that looks like: 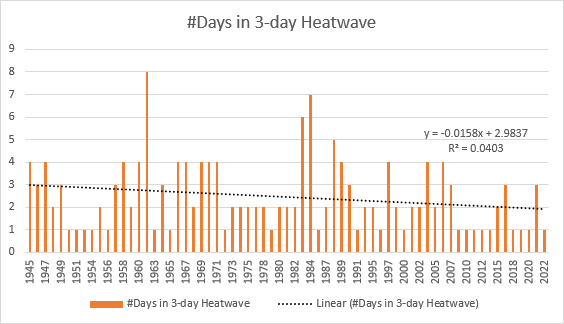 Once again, we have a downward trend. Heatwaves have been getting shorter.

The article quotes an IPCC report saying the heatwaves are likely to become more common. I’ll acknowledge that the report does say that, though it’s based on models that so far are proving to be pretty inaccurate. But the author said that heatwaves are becoming more common. Well, not in Estevan they aren’t. My guess is the only places they are becoming more frequent are at the airports and downtown centers. 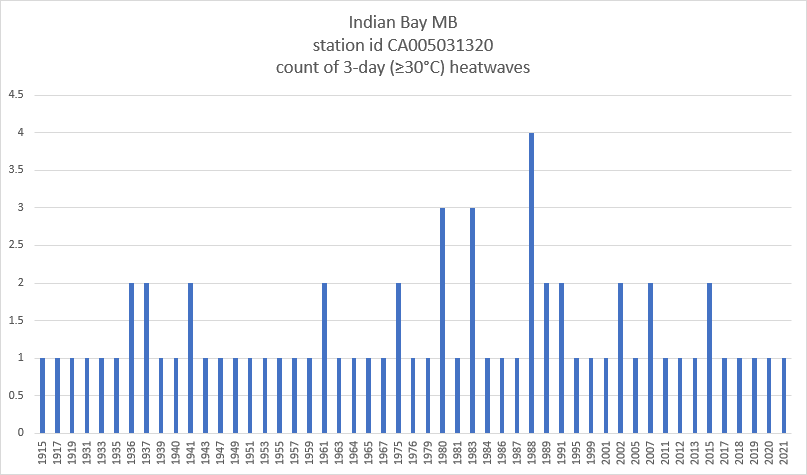 Obviously 1988 was a hot year, with 4 three-day-or-more heatwaves. But since then it’s been pretty normal, at around one per year, sometimes two.

If we sum up the number of days for all the 3-day-or-more heatwaves each year, we get this picture: 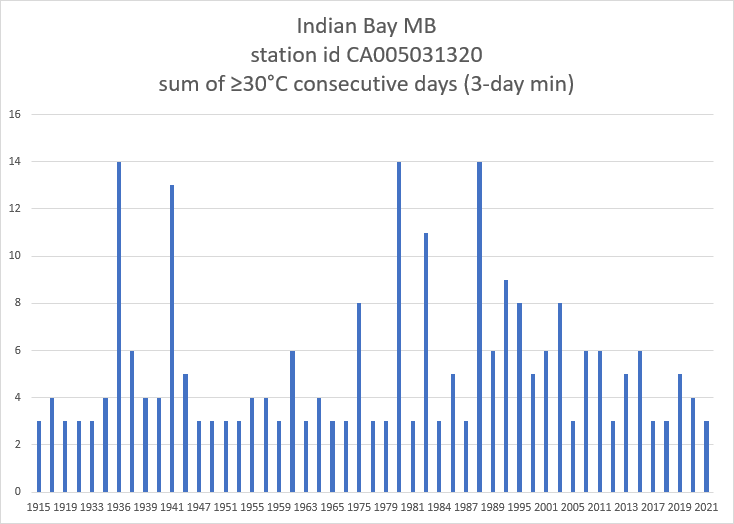 Ok, so that’s obviously been trending downward this century.

In fairness July was a bit worse, with a 3-day stretch above 30 degrees, peaking at 34.1 degrees C. But as Puckering shows, summer days above 30C are an annual occurrence. And with a very small amount of digging we found the pre-1944 Estevan climate record. Here are just some of the heatwaves, noted by the number of consecutive days in July above 30 degrees and the maximum reached:

To send us another entry for Everybody Knows, email us at admin@climatedn.com.

4 comments on “Everybody knows: prairie heat waves are getting worse”