Hot town, summer in the city

It’s that time of year again, at least here in the Northern Hemisphere. With a nod to our many readers south of the equator who are heading the other way, up here the mercury is rising and the prospect of heat waves is upon us again. After a long hard winter and an endlessly cold spring we’re not complaining. But then we’re not climate activists looking for a reason to complain. Let the summer sun shine upon us and the alarmists will start moaning about heat waves and death rates. Luckily for them there is some evidence of more heat waves since the 1960s (although fewer compared to the 1930s). But unluckily for them, the latest evidence shows, for the US at least, death rates due to heat waves have fallen steadily since the mid-1970s. 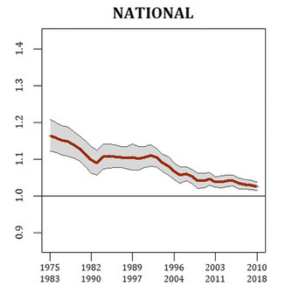 The chart above is from a recent paper in the journal Weather, Climate and Society. The authors put together mortality data for the 107 largest cities in the US from 1975 to 2018. They defined heat wave days based not only on temperatures but on how they departed from local norms for that time of the year, since people in hot places like Phoenix get used to temperatures that would have people from, say, Minneapolis staggering. Then they figured out risk ratios, in a format where 1.0 means the number of deaths is no higher than expected, whereas 1.1 means there were 10 percent more deaths than expected due to heat.

One of the first things they found was that there is no point looking at anyone less than 45 years of age. They don’t exhibit any mortality risk due to heat waves. They also found that women are much less likely to suffer from heat compared to men. And overall they found that the risk of dying from heat has fallen steadily in most places over the 43 years of their sample. 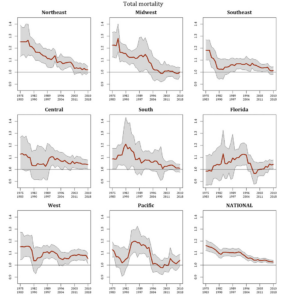 As shown in the chart above, it didn’t go down everywhere. But on average for the country as a whole it declined steadily. In Florida it rose during two separate intervals, including from 2003 onward, which has a lot to do with the rising elderly population. Same with California.

Finally, one of the points the authors made is that death rates from heat are higher in regions with lower income, probably due to people’s inability to afford to turn on the air conditioning. Since soaring energy costs and unstable power supplies are an inevitable result of climate policy restrictions, it is fair to say that the risk of death due to heat waves is not the fault of climate change, but climate policy. And if you do say so, you will suddenly discover that climate alarmists don’t actually care about preventing death due to heat waves if it means scaling back their policy plans.

Previous PostIt's for the greater good
Next PostCDN by the Sea: Adak, Alaska

One comment on “Hot town, summer in the city”