A new study from the Grantham Institute in the UK presents findings that are remarkable on many fronts. First because the Grantham Institute is one of many such outfits endowed by billionaires – this time Jeremey Grantham, a UK-based financier – to beat the alarmist drum in universities, yet the study shows that warming is far better than cooling, or even the status quo, when it comes to preventing death. Second because it finds that even when hot weather causes excess deaths, the effect is short-lived and only tends to hasten the deaths of people who were likely going to die soon anyway, whereas cold weather has long lasting effects on the broader population. And finally because the effects are so stark. Only the most extreme heat is associated with higher mortality, even in a hot country like Mexico, whereas even mild cold spells are deadly and extreme cold (below 12 degrees C, which apparently counts as extreme cold in Mexico but in Canada we still consider “summer”) is over three times deadlier than extreme heat. And once income effects are taken into account heat is all but irrelevant whereas cold weather remains the Ángel de la muerte.

The authors reached their conclusions by assembling a dataset of over 14 million daily mortality records from 3,000 Mexican municipalities from 1998 to 2017, which they matched to local weather records and income levels. They estimated that about 75,000 deaths annually in Mexico are due to weather, of which less than one percent (700) are attributable to temperatures going above 32° C. Days with mean temperatures below 10° C kill nearly seven times as many people (4,750 annually), and days with cool weather – between 10 and 20° C – kill around 62,000 people annually. Combining the “extreme” and “moderately” cold days give us a death toll of 66,475, which is 95 times the death toll from extreme heat.

The details are found in their Figure 2, reproduced here: 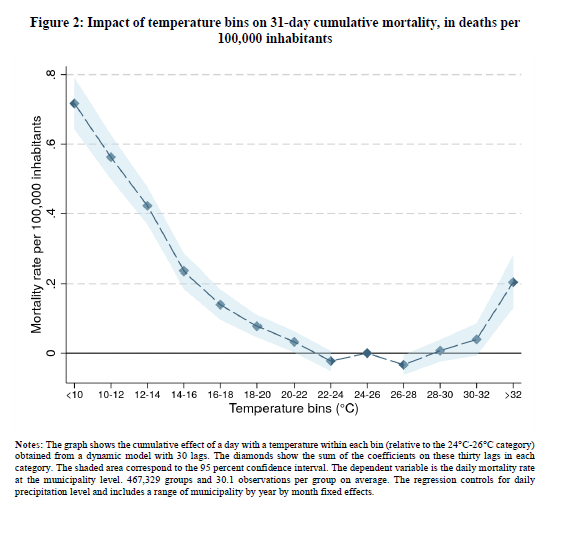 The horizontal axis shows average daily temperature and the vertical axis mortality per 100,000 persons. From about 20° to 30° C the effects are not significant, as shown by the shaded uncertainty region not being above zero. Above 32° C there is a mortality effect due to heat, but it is low compared to the effect of extreme cold. Once temperatures are below about 16° C the mortality effect from cool weather exceeds anything due to heat.

The authors also show that the mortality of cold weather persists, with elevated mortality lasting 14 to 15 days after the temperature drop. A heat wave, by comparison, has only a very short term effect that lasts for a couple of days at the most.

The authors also found that when death rates were divided up by income into four quartiles, only those due to cold were statistically significant. 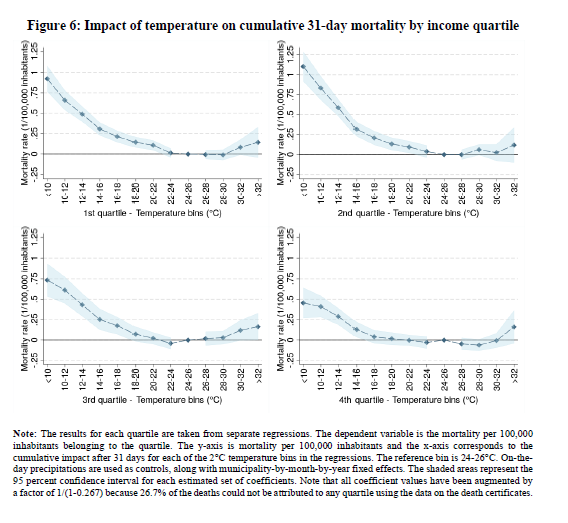 [The] media misrepresentation of the relative burden of extreme temperatures is particularly striking in the case of very hot days. Whereas unusually hot days receive significant media attention, the question of their actual impact on mortality remains controversial once account is taken of displacement effects, i.e. the impact of a day’s temperature on the mortality levels of the following days. Extra deaths on hot days were often found to be offset by lower mortality rates on the following days, suggesting that mortality on hot days largely corresponds to a “harvesting” effect (Braga et al., 2001; Hajat et al., 2005; Deschenes and Moretti, 2009)

Thus while extreme heat does kill people, it mainly affects people who were close to dying anyway, and the tell-tale sign was that in the days after a hot weather event the death rate goes below normal because the vulnerable have already been “harvested”. They cite another study of 384 locations in 13 countries that found 7.3% of deaths were attributable to cold while only 0.4% were attributable to heat.

The authors say their results apply to other countries besides Mexico, and especially to other low-income countries where people can’t afford the kind of housing and health care that protects them from cold-induced disease and death. They argue that not only would higher incomes help prevent weather-related deaths, so would higher temperatures. What they don’t say, at least not in so many words, is that the dream of climate alarmists is that we will have lower incomes and colder temperatures over the next 50 to 100 years, which is a death sentence for developing countries like Mexico.