We continue our summary of a new peer-reviewed survey of extreme weather trends with a topic that few alarmists seem to want to touch on: the greening of the planet and its connection to rising CO2 levels. The authors summarize several independent studies that have used changes in atmospheric chemistry and satellite imagery, all of which conclude that the world is getting greener. Even deserts are starting to green up. And rising CO2 is behind it at least in part, though agricultural practices have also improved. The combination means rising food production per hectare, and the authors point to evidence that a return to pre-industrial CO2 levels would entail an 18 percent drop in global agricultural productivity. We’re willing to go way out on a limb here and say it would be a bad thing due to the mass starvation facing poor nations if humans overall grew a fifth less food.

The authors acknowledge that rising CO2 and the general greening effect is a complex issue, and without adaptation it is not always beneficial. For example, they cite a study that showed that more rapid plant growth in the early spring can lead to drier soils in the summer. So farmers need to adapt practises accordingly. But we know they are good at adapting and increasing productivity for the simple reason that agricultural productivity has been rising for decades. And millennia, we might add. But especially recently. The authors present the output per hectare record for maize, rice, soybean and wheat since 1961, which taken together provide 64 percent of the world’s caloric intake. 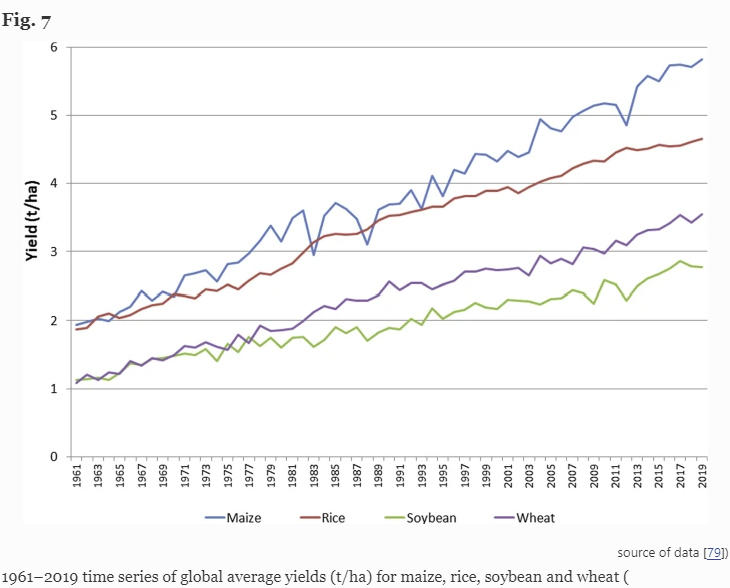 These are remarkable growth rates ranging from 2.4 to 3.8 percent per year, which translates into food growth outstripping population growth. The authors also point out that variations in extreme weather events have not had any effect on agricultural productivity growth. In sum, rising CO2 has contributed to overall global greening and improved agricultural productivity. Which is one reason why alarmists remain so silent on the subject.