As before we offer you a paraphrase of recent IPCC conclusions on some aspect of climate change so counter to glib alarmist slogans that we expect the Facebook censors to swing into action and march you off to the internet Gulag. If it should happen, you can send them the source below the fold to try to convince them to let you out again. This week’s provocation: “What’s the panic about 1.5 degrees of warming? As long as farmers know how to adapt to changes in seasonal weather, which they do, extra CO2 and a bit of warming will be good for most kinds of agriculture in most places around the world. In most places our main food crops would probably do better even with 3 degrees of warming.” 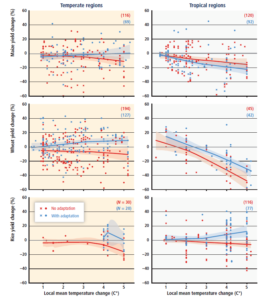 Each dot represents the result of a study looking at the effect of warming on yield, with red dots when the researchers assumed no one adapted to local warming, and blue if the researchers took account of adaptation. The lines through the dots estimate the average effect. The blue lines for all three crop types in the temperate regions show that yields don’t fall, and likely grow, even up to 5 degrees of warming. In the tropics it’s the same for rice, though wheat begins to go negative around 3 degrees warming. Maize production drops, although oddly the graph suggests farmers do better by not adapting, and since farmers always have the option not to adapt, in that case the red line is the relevant one.

It shows negative average effects on maize set in by 3 degrees. So, other than maize in the tropics, warming is not a threat to agricultural yield even far above the 1.5 degree level that we’re told represents the onset of Farmageddon.

Previous PostSimply dismantle oppression, and...
Next PostInteractive effects of light and CO2 on coffee growth