From CO2Science: In setting the rationale for their work, Zou et al. (2018) say that “there is increasing concern that local severe storm occurrence may be changing as a result of climate change.” Indeed, it seems that almost anytime severe weather occurs, climate alarmists are quick to place blame at the feet of CO2-induced global warming, asserting that these type of events are becoming more frequent and more severe in consequence of rising atmospheric CO2. Such claims, however, are inaccurate and have been disproven by real-world data time and again. In this case the authors pointed out that the Tibetan Plateau is the ideal place to examine the link between warming and severe storm and hail events. Which makes their findings particularly interesting.

As background, see the many reviews CO2Science has published on the topic of climate change and extreme weather under the subheadings links for Weather Extremes in the Subject Index.

Starting off their analysis, the four scientists who conducted this work note that the Tibetan Plateau (TP) is considered to be “one of the most sensitive areas to climate change.” Over the second half of the 20th century it warmed at an average rate of 0.16 °C per decade. What is more, the region of the TP experiences the most frequent occurrence of hail and thunderstorms in all of China. Thus, if there ever was a location to test the hypothesis that global warming increases the frequency of severe storms and hail events, this is that place! And so, that is exactly what the researchers set out to do.

So what did they find?

As displayed in the figure below, despite considerable warming over the period 1960-2012, Zou et al. determined that there has been a statistically significant decline of 3.1 storms days per decade across the TP. Hail days, on the other hand, showed a slight increasing trend of 5.8% per decade from 1955-1980, but thereafter declined by a much larger 18.3% per decade over the period 1980-2012.

With respect to the cause of the observed declines, Zou et al. analyzed a series of meteorological soundings of the atmosphere, as well as reanalysis data and found that a drying of the mid-troposphere, likely caused by surface warming, was “the primary reason for the decrease of warm-season storm days in the TP.” And, they add that weaker wind shear combined with an increase in the height of the atmospheric melting level, mainly after 1980, led to the decline in the number of hail days. Consequently, they conclude that their results “imply that global warming is likely to cause a decrease in the conditions required for severe thunderstorm and hail formation in the TP over the next century.”

Say it isn’t so! Poor climate alarmists, it looks like you’ll just have to find another false target to hang your propaganda upon. The real world simply doesn’t behave in the way your model-projections dictate! 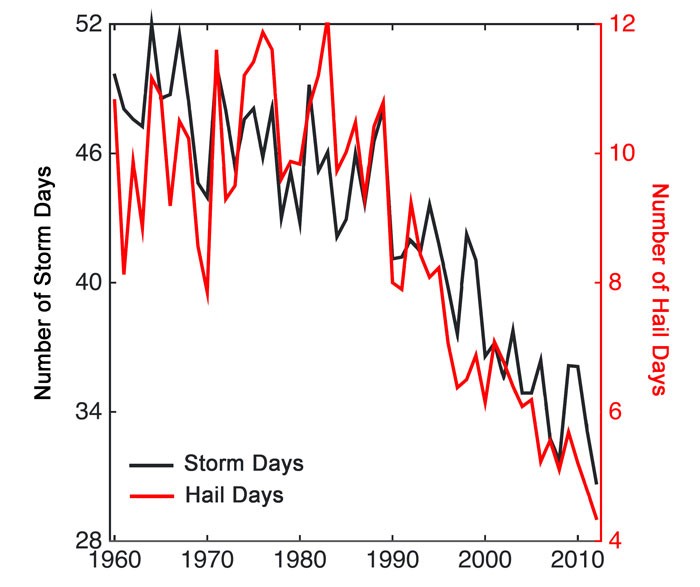