From CO2Science: Policies aimed at protecting humanity and the environment from the potential effects of CO2-induced global warming rely almost entirely upon models predicting large future temperature increases. But what if those predictions are wrong? What if a comparison between model projections and observations revealed the models are overestimating the amount of warming? For non-ideologues who are willing to examine and accept the facts as they are, the recent work of Huang et al. (2019) provides reason enough to pause the crazy CO2 emission reduction train.

In their study, the five researchers set out to examine how well model projections of Arctic temperatures (poleward of 60°N) compared with good old-fashioned observations. More specifically, they used a statistical procedure suitable for nonlinear analysis (ensemble empirical mode decomposition) to examine secular Arctic warming over the period 1880-2017. Observational data utilized in the study were obtained from the HadCRUT4.6 temperature database, whereas model-based temperature projections were derived from simulations from 36 Coupled Model Intercomparison Project Phase 5 (CMIP5) global climate models (GCMs). The key results are depicted in the figure below. 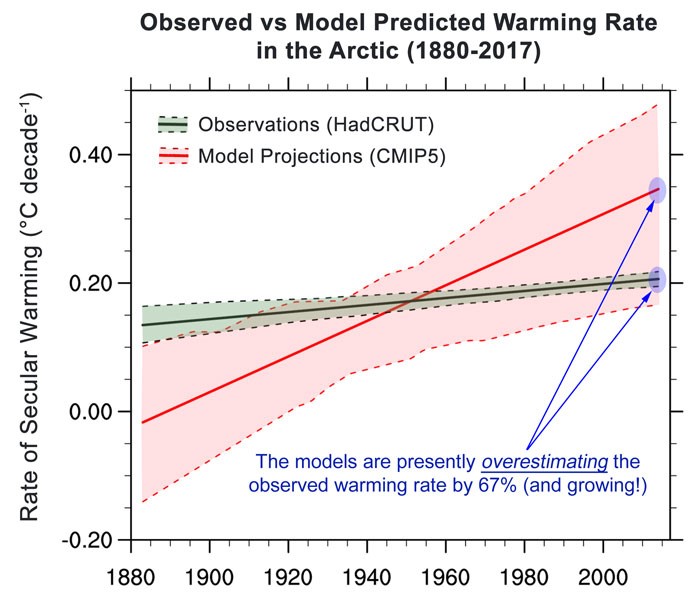 In commenting on these findings, Huang et al. state the obvious, that “anthropogenically induced secular warming has been overestimated by the CMIP5 GCMs during the most recent warming period, and the overestimation is aggravated with time.” What is more, given the error bars shown on the figure, in the very near future the observed warming rate will likely soon fall outside the significance levels of the ensemble model mean, removing any remaining credibility left in the model projections of future Arctic warming.

With regard to why the models are over predicting modern warming, the five researchers say “it is hard to figure out whether the overestimation of the secular Arctic warming rate mainly comes from inaccurately simulated change of Arctic sea ice extent or effects of associated physical processes under increasing anthropogenic emissions.” Our bet is on the latter explanation. The models are likely running too hot because they overestimate the warming power of rising atmospheric CO2 (see our video clip Is Rising Atmospheric CO2 Causing Dangerous Global Warming? to learn why).