If you're waiting for Greenland's ice cap to melt...

You'll be waiting a long time. Paul Homewood, irritated at a sensational graphic from a news service on the supposed disappearance of the Greenland ice cap, pulled together some standard data sources and gave his readers a quick re-cap of the numbers. Every year the ice cap gains about 600 billion tonnes of ice due to snowfall and freezing and also loses about 600 billion tonnes, with a net loss of about a billion tonnes per year. If that sounds like a lot, bear in mind that the ice cap contains about 2.6 million billion tonnes of ice, so at present rates it would take about 26,000 years to melt. But long before that another ice age would likely have started.

The Greenland ice cap has endured much warmer periods than the present over the past several millennia. Homewood reproduces a graph from a 2000 scientific paper showing the conspicuously cold nature of modern Greenland temperatures compared to those that have prevailed for thousands of years since the end of the last ice age. If a tiny bit of modern warming were enough to melt away the Greenland ice, why didn't it melt away in the Medieval period, or the Roman or Minoan periods, or any of the previous warm intervals? 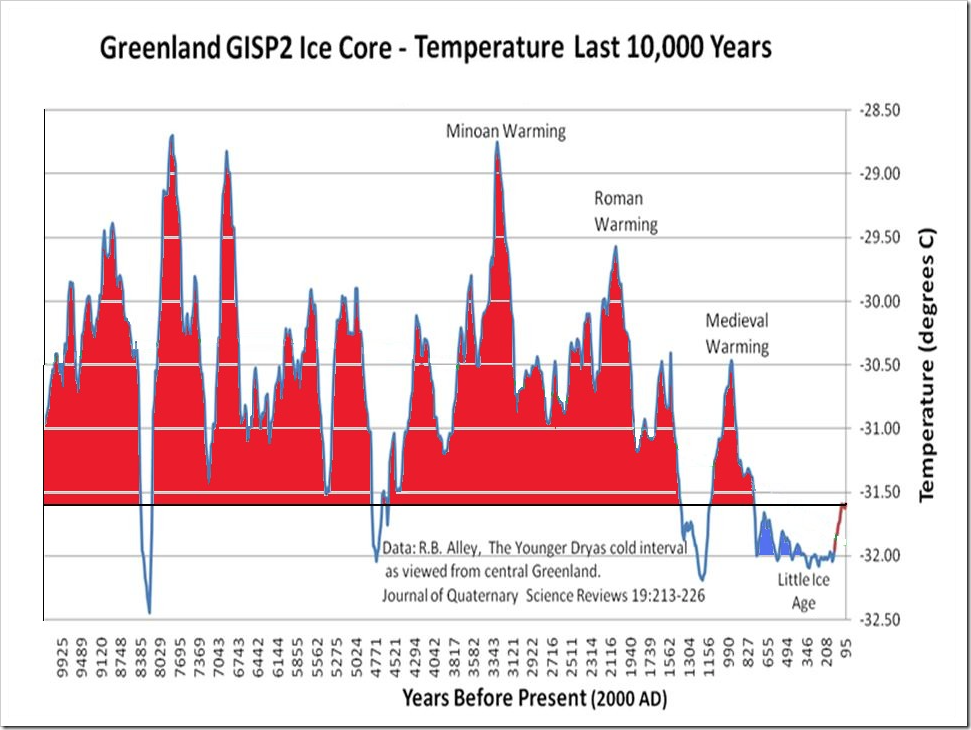 There is also the conspicuous matter that Greenland weather data shows temperatures nowadays are about the same as they were in the 1930s. And, miraculously, the ice cap didn't melt away then either.

But apparently this time it's different because like you know man.

Previous PostEat us last please. Will Sunday do?
Next PostAnd if you're waiting for Pacific islands to go underwater...