Twelve centuries of snowfall severity in the Mediterranean region

From the CO2Science archive: According to Diodato et al. (2019), understanding the inter-annual to multi-decadal variability of historic snowfall events is important for (1) “detecting signals of climate change in snowfall records,” (2) “validating the output of climate model simulations,” and (3) “better understanding the interactions between climate and the cryosphere.” However, they lament the fact that “the brevity of the instrumental record limits our understanding of snowfall variability and its directional patterns in the Mediterranean region.” Thus, it was their objective to develop the first long-term reconstruction of snowfall in this region.

Diodato et al. accomplished their design by examining a multitude of documentary sources of snowfall events from the Early Middle Ages to the present day, including “diaries, annals, memoirs, chronicles, leaflet newspapers, early journalism, economic records, pictures, ship logbooks, weather reports and other written reports. Then, they performed a series of statistical procedures and analyses to create an annual winter snow severity index for the Mediterranean region over the period AD 800-2017. The resulting Index is presented in the figure below.

As shown in Figure 1, snowfall severity has varied on multi-decadal and multi-centennial time-scales over the past 1,200 years. In particular, less snow fell during the Medieval Warm Period (~800-1300) while snowfall was much more prevalent and severe thereafter during the Little Ice Age (~1300-1850), which latter era witnessed the two “snowiest” centuries of the past millennium (the 17th and 16th centuries). Milder conditions followed thereafter with reduced snowfall severity conditions occurring from the 18th century onward to today. And of the most recent decades, Diodato et al. say that “snow occurrences have remained unchanged,” adding that “the recent reduction in Italian snowfall intensity is not unprecedented over the past millennium, since comparable patterns of low snowfall intensity also occurred during the Medieval Climate Anomaly.”

Finally, with respect to the forcing mechanisms driving the snowfall severity trends, the authors say they remain uncertain, albeit their analysis “indicates that a persistent positive Atlantic Multidecadal [Oscillation] and a relatively weak volcanic forcing may explain the low snowfall rates of the medieval and recent warm periods,” whereas increased volcanic activity and weakening of the AMO likely caused the higher snowfall of the Little Ice Age. Whatever the case may be, one thing seems sure: there is no obvious indication that rising atmospheric CO2 over the past century has had any impact on snowfall severity in the Mediterranean region whatsoever. There is nothing unusual, unnatural or unprecedented in this record to suggest otherwise. 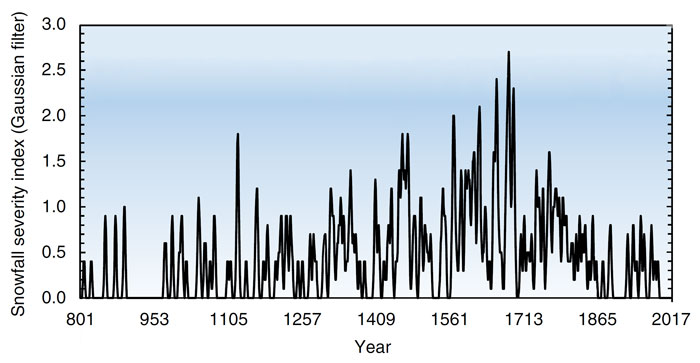 Figure 1. An 11-year Gaussian filter of the winter snowfall severity Index for the Mediterranean over the period AD 800-2017. Source: Adapted from Diodato et al. (2019).

Previous PostHeavy snowfalls and ice storms: what the IPCC Atlas has to say
Next PostA reminder that cold is worse than heat