CDN readers are familiar with the RCP8.5 cheat in which climate modelers use a grossly exaggerated emission scenario to project grossly implausible warming over the coming century and then claim it represents “Business-as-Usual” unless we drastically cut our carbon emissions. In a recent talk at something called the “Scenarios Forum”, Professor Roger Pielke Jr. presented updated analysis he and coauthors have done evaluating not just RCP8.5 but all 1,311 emission projections developed by the IPCC. Yes, that’s right. The science is so “settled” they’ve got it down to a mere 1,311 possible outcomes. Pielke Jr. and his coauthors then screen the scenarios based on how well they match what happened in the past, on the thinking that the least we should expect of a projection is that it got the part right that the modelers could already check, and then that it lines up fairly well with short term future projections from specialists in the energy industry who are paid to forecast near future trends. Of course RCP8.5 doesn’t make the cut. But nor do most IPCC scenarios, and the ones that do suggest we’re in for the low end of warming forecasts.

At this point in his talk, Pielke Jr. shows two graphs. The top one contains all 1,311 scenarios deemed “plausible” by the IPCC, with cumulative 21st century CO2 emissions on the horizontal axis and warming as of 2100 on the vertical axis. The red oval encircles the whole set. Then in the bottom picture the red oval is confined only to scenarios that pass a basic test of matching the past and near future. 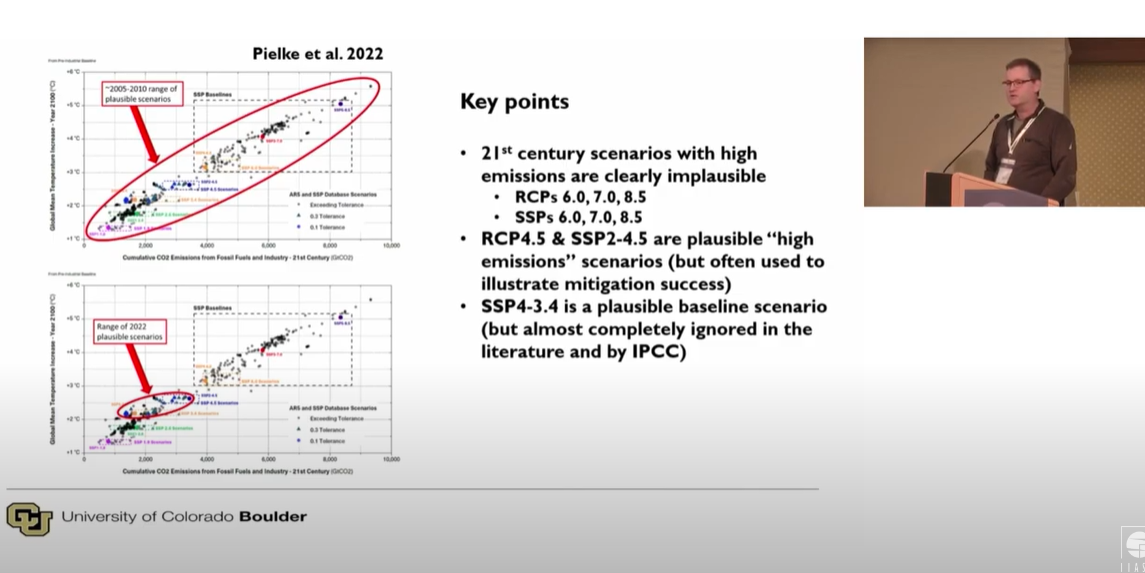 Everything higher up on the chart can be dismissed as implausible, including the scenarios that have been the focus of nearly all the so-called “impacts” analysis in the academic literature. And it turns out that the lower group, the RCP4.5 scenario, which is commonly held out as what will happen if policy gets aggressive, is actually on the high end of what will really happen if it doesn’t, if we go with “Business-as-usual”.

The scenario most consistent with continuation of current trends, Pielke Jr. notes, is “almost never studied by anyone.” Of course not, why dilute the message with reality?

Pielke Jr. also presents on his Substack page a graph from a colleague showing the progress of emissions over time compared to the IPCC scenario envelope. 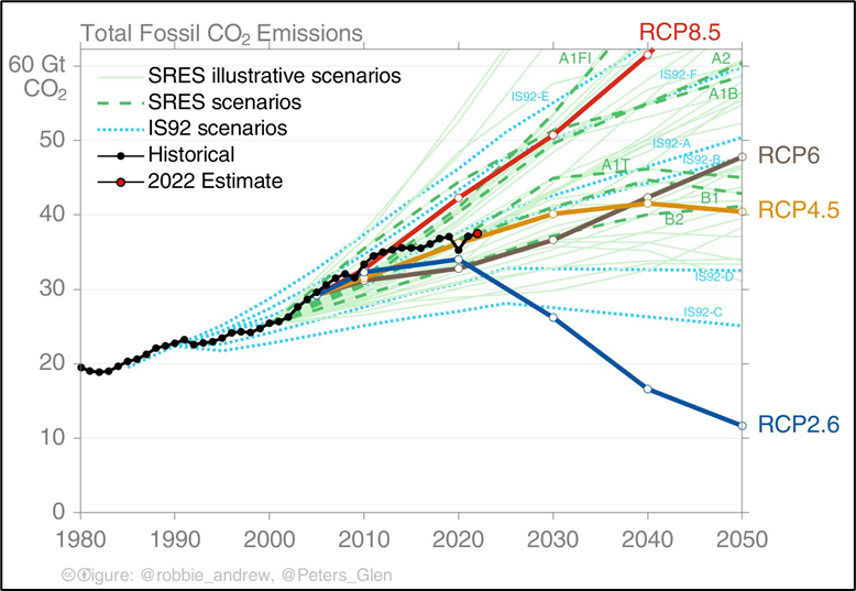 While CO2 emissions do keep rising, largely thanks to China’s aggressive rush to coal, they are still clearly well below the RCP8.5 track and look set to follow RCP4.5 for the foreseeable future.

We already know most climate models run too hot on whatever carbon they are given. Now we know climate scientists also feed them too much carbon, which makes alarmists see double. What’s worse, we know that they know they’re doing it. But they don’t seem to know that we know that they know. But we do know, and we don’t need to apologize for calling their scary forecasts out as rubbish.

Previous PostEverybody knows: polar bears are dying due to climate change
Next PostSimulations of seasonal snow in the Upper Colorado River Basin