Even when they know the answer the models warm too much

A new paper in the peer-reviewed journal Climate Dynamics by Italian climate scientist Nicola Scafetta reviews 688 state-of-the-art climate model runs over the period from 1980 to 2021 and finds that only the models with the lowest sensitivity to CO2 manage to reproduce the recent past. So even though the modelers know what the recent past looked like, when they feed in observed CO2 emissions the vast majority of models still spit out too much warming. It’s noteworthy, first of all, that the amount of warming in the models even over a relatively short time varies by a factor of at least 3. Some settled science. But it’s also very telling that the biases aren’t split between too much and too little warming. It’s all a one-way pattern. Kind of like the modelers only ever adjust the knobs in one direction.

This new paper, which Scafetta discusses at Judith Curry’s blog, is much like a paper he published earlier this year, which we discussed here and here. But he has expanded his list of climate models to include every run from every model used by the IPCC for their latest report. And he compares them to a wider range of temperature data products. But like before, the results are straightforward. 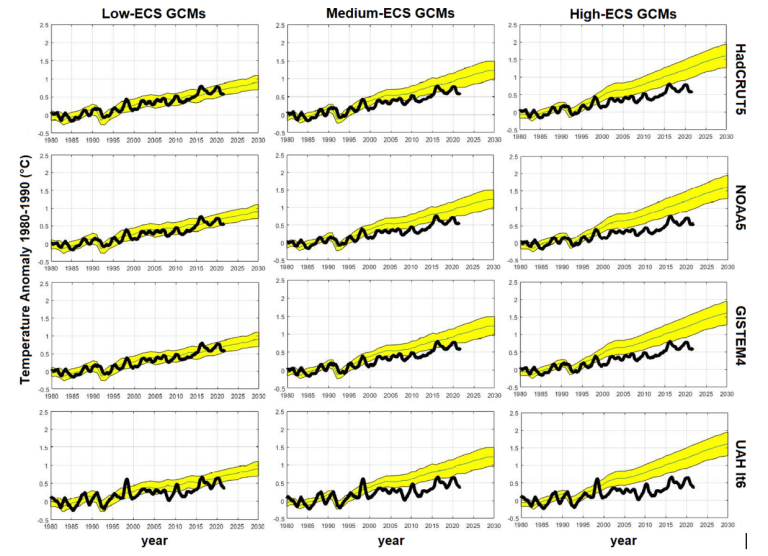 The top row shows observed temperatures (black line) from the UK Hadley Centre compared to model runs (yellow bands), and the other rows show three other temperature data sets. The left column shows the warming trend predicted in the “low-ECS” models, or the models that have the least response to CO2. The middle column is from the medium ECS models and the right column is from the high ECS models, the ones that respond most strongly to CO2.

Clearly only the low-ECS models get the warming anything close to right. The medium- and high-ECS models do not describe the climate we live in, they describe some hothouse alarmist dystopia. But those are the models that governments look to when conjuring up images of what the future will bring, which is why gullible young people have taken to throwing soup at van Gogh paintings.

Scafetta goes further and argues that some of the discrepancy between models and observations suggests the land temperature record may be biased upward due to urbanization and land use change. If so, even the low-ECS models may be warming too much and are predicting too much warming. He concludes “the projected global climate warming over the next few decades could be moderate and probably not particularly alarming” and adds:

“only the low ECS [climate model] group can be considered sufficiently validated by the global surface warming observed from 1980–1990 to 2011–2021. Therefore, only the 21st century climate projections produced by the low ECS GCMs should be used for policy. For decades to come, these models predict more moderate warming than the GCM groups with medium and high ECS do for similar greenhouse gas emission scenarios. By 2050, projected warming is expected to be around 2 ∘C or less even for the worst greenhouse gas emission scenarios. This moderate warming should not be considered particularly alarming because the impact and risk assessments related to it are considered ‘moderate’ assuming even low to no adaptation (IPCC 2022).”

It’s a safe prediction, and even though the usual suspects will ignore it, the pattern is so well set that the smart money should be on real world temperatures stubbornly refusing to warm the way models keep saying they should.

Previous PostMoooving right along
Next PostEverybody knows: BC droughts are worse than ever