As we stated last week, Professor Nicola Scaffeta of the University of Naples Department of Earth Sciences has published a detailed, peer-reviewed assessment of the latest generation of global climate models, and the results are not encouraging, if you were hoping to find out that the models are accurate. In another sense the results are encouraging. The models all did pretty badly at reproducing the spatial pattern of climate warming over the past 40 years, even though the people who build them got to see the answer while they’re doing the programming and failing an open book test is always embarrassing. But what’s encouraging is that the models that did the best, or at any rate least worst, are also the ones that predict the least warming. Specifically, the only models that line up with reality even on overall outcome predict less than 2 degrees C warming compared to preindustrial times between now and 2050 even under the highest emission scenarios. And that, according to Dr. Scaffeta, is “unalarming”.

Scaffeta grouped the models into high-, medium- and low-ECS (Equilibrium Climate Sensitivity) groups based on how large an absolute temperature increase they assumed would result from a doubling of atmospheric CO2. We saw last week that the high-ECS model reconstructions differed significantly from observed warming patterns over more than 80% of the Earth’s surface since 1980. Basically a coin toss would have done better.

Another test is how well the models reproduce the global average warming trend. The following figure shows the answer. 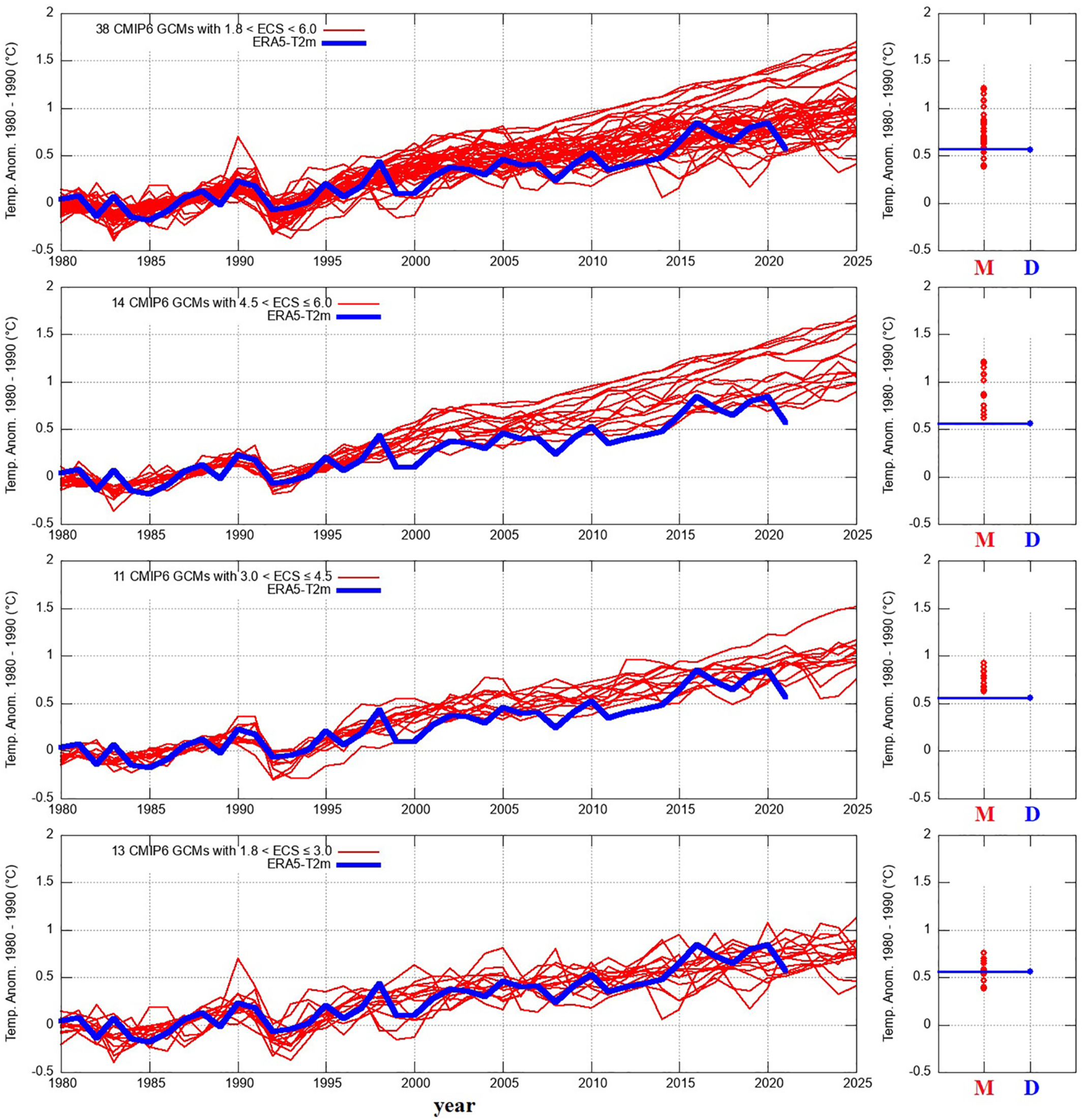 The top panel shows 38 climate model reconstructions of the global average temperature trend (red lines) compared to the observed temperatures (blue line). The next three panels show just the outputs of the 14 high-, 11 medium- and 13 low-ECS model runs respectively. Along the right column the red dots show the size of the model warming trends and the blue line is the observed warming trend.

All the high-ECS and medium-ECS trends are above the observed trend. For the low-ECS models the observations run through the middle of the model pack. So the 13 low-ECS models managed to get the last 40 years about right in terms of the global average, though even they still got the spatial pattern wrong in 60 percent of places around the world. Two-thirds of the models ran too hot overall.

So whether the alarmists are willing to admit it or not, we can draw the obvious conclusion. Most climate models run too hot, and the ones that don’t are telling us we shouldn’t be alarmed. Scaffeta comments:

The prospect of experiencing a high level of warming associated with high ECS models has led to costly international efforts to reduce net greenhouse gas emissions to zero on a rapid timetable. However, the low-ECS GCMs predict average warming by 2040–2060 close to or lower than 2°C even for the SSP585 scenario (Table 1), which is considered highly unlikely (IPCC, 2021). The fact that the high and medium-ECS GCMs do not appear to be consistent with the observations over the past 40+ years imply that their projections should not be used as a basis for policy. The low-ECS GCMs are the closest to the data but they are unalarming because they predict moderate warming...Thus, inexpensive adaptation policies should be preferred because they should be sufficient to address most hazards related to future climate changes.

Which sounds like a rational conclusion. And as we always say, when it comes to climate change, it’s important to follow the science.

Previous PostCDN by the sea: Victoria BC
Next PostOne thousand years of summer temperatures in northeastern Canada