Thanks for the suggestions for our new Everybody Knows series, where we take on climate claims so universally repeated that no one bothers to check if they’re true. If you spot one, send a note to admin@climatedn.com (being sure to send the link to the story) and we’ll have at it. This week we look at a very strange CTV news story about how climate change is destroying Canadian agriculture while at the same time farmland is getting so valuable young farmers have trouble entering the business. (Sound of knuckles cracking) Let’s have a look, shall we?

It really is worth reading the piece to savour the amazing spectacle of a reporter, one Mitchell Consky, pretending to be interested in what the interviewee had to say just enough so he could write the story he wanted to write, which was boo, climate change bad, despite what the farmer was saying and despite what the rest of the story revealed. Namely, Canadian farmland is soaring in value, making it difficult for a new generation to buy their way in. Which right away tells you that Canadian agriculture is doing just fine, something our crop statistics attest to. But Mr. Consky (B.A. in English and Film, M.A. in Journalism) thinks the real problem is that the planet is so hot there’s “crop-damaging weather patterns of climate change.” Whereas Patrick Verkley, the farmer he was speaking to, was concerned that in his area farming was so hot the price of farmland had doubled in recent years.

So who’s right? Our money is on the farmer, whose livelihood depends on knowing what the data show, as opposed to the CTV reporter whose livelihood depends on not knowing it. Even when he’s reporting it. How can it be the case that climate change is ruining the productivity of cropland while cropland is soaring in value? More to the point, where did the idea come from that climate change is ruining crop productivity? The farmer didn’t say it. Neither does data on cropland output.

As we noted last week, Canada has agricultural output data going back many decades, in some cases over a century. But we are here concerned with crop production during the interval of the alleged climate emergency, which for convenience we will say began in 1980. We avail ourselves of the records at Statistics Canada regarding the annual production of barley, beans, canola, corn, oats, rye, soybeans, sunflower and wheat. Adding them all up gives us the following: 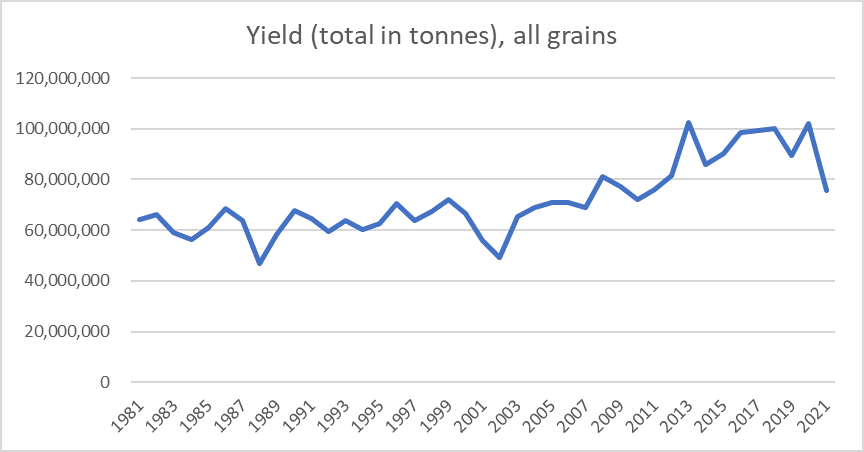 Crop production remained steady at around 60 million metric tonnes through the 1980s and 1990s, then when the climate crisis really got going around the year 2000 crop production shot up to between 80 million and 100 million tonnes. If only every crisis looked like this. And lest you think it was due to farmers expanding their farms by moving into melting Arctic ice fields, yield per hectare also rose over this interval: 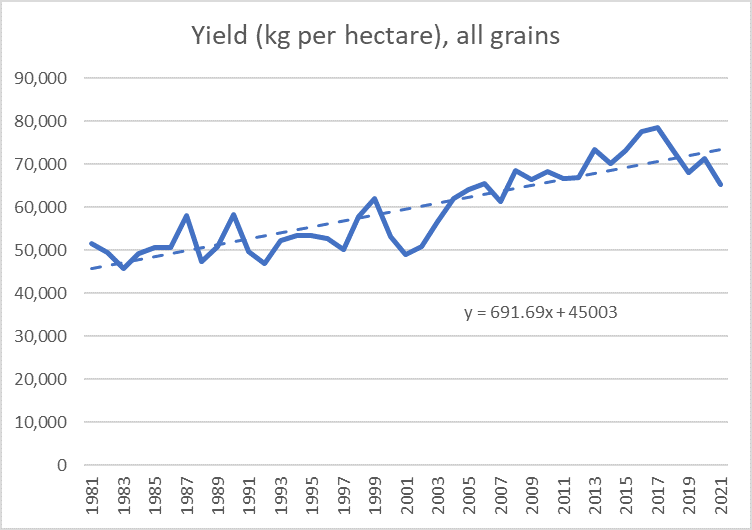 On average since the 1980s Canadian farmers have grown an additional 692 kg worth of crops on every hectare of land every year since 1980. Which might have something to do with why that land has grown in value.

Got another entry for Everybody Knows? Send it to admin@climatedn.com and we’ll run over it with our plow.

Previous PostAre you trying to fuel paranoia?
Next PostGerman drought: unpleasant but not unprecedented

One comment on “Everybody knows: climate change is destroying farming”