A recent study from the UK (h/t No Tricks Zone) examined data on 10.7 million deaths in England and Wales from 2000 to 2019. They divided the countries up into 1 degree by 1 degree latitude-longitude boxes and developed a statistical model to predict what the expected number of deaths should be each day based on historical trends. They compared those estimates to the observed deaths and looked at how the deviations correlated with the weather. Sure enough, hot weather was found to be deadly, killing an estimated 791 people per year. But cold weather killed 60,753 people, making it 77 times deadlier. Maybe because the cost of home heating has gone up so much in response to hysteria about hot weather.

The authors summarized their findings in the following graphs. Each panel shows the Relative Risk (RR) of death (vertical axis) associated with temperature (horizontal axis). Note that the horizontal temperature axis uses not degrees but percentiles not degrees, so that “50” is the point where half the days are warmer than average and half are cooler, with everything to the left of 50 being more cool days than usual and everything to the right of it more warm days than usual. 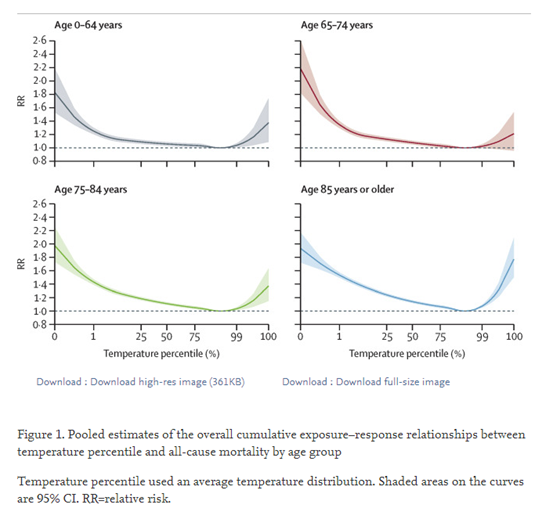 The downward-sloping line means that as the mercury rises, the risk of dying falls except at the very top of the temperature distribution, and even there only slightly for everybody under 85, whereas mortality rises steadily as it gets colder for everybody. And except for the 85+ group, the risk even of temperatures above the 99th percentile, the top 1% of hot periods, is lower than that of cold weather.

So bring on the warm weather, especially the kind greenhouse gases are alleged to cause, namely slightly warmer winters. Global warming saves lives. (Say, there’s a good slogan for a CDN T-shirt.)