What do you call a leader with no followers?

In the National Post Rex Murphy takes square aim at another important climate myth and hits it dead on. He quotes a March 29 tweet from Canadian Prime Minister Justin Trudeau that “In the global fight against climate change, Canada is leading the way.” And then Murphy asks “how”? It’s the sort of question you’re not meant to ask in the midst of some soaring vacuity. But given what’s at stake, it’s entirely appropriate to yank on the PM’s balloon string and go “If we’re leading, who’s following us? Where are they going?” Not least because when it is pointed out that nothing Canada does will make the slightest difference, according to the models, because our share of total global man-made GHGs is so small, the response is that our example will prove compelling to others. Oh really?

It's not even clear that there is a “global fight against climate change”. Again, like “international community”, this sort of trendy phrase is a kind of rhetorical badge of membership in the virtue-signalling elite. But there are moments when one has to shake oneself out of the warm, cozy stupor and ask what it actually means, or even could.

Is “international community” a reference to the current 195 countries in the world, a tally reached by adding the 193 members of the UN to the two observers, the Holy See and the State of Palestine? And if so, what makes them a “community”?

A Google search “community definition” on April 1 yielded a result with no link beyond one explaining how it generates such results. 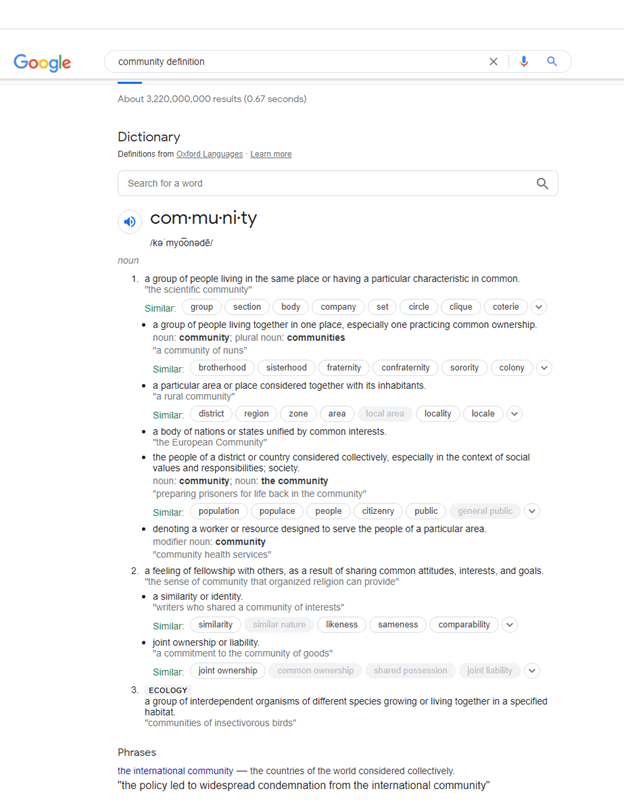 But as this image shows, it begins “a group of people living in the same place or having a particular characteristic in common” and promptly provides the fatuous example “the scientific community”. Scientists do not all live in one place and they have little in common from attitude to specialization to degree of skill (which is not irrelevant since false generalizations about a false collective such as “the scientific community believes in a man-made global warming crisis” play an important role in the debate).

Then the result offers “a group of people living together in one place, especially one practicing common ownership” as in “a community of nuns”. That “community” implies “communism” is a new one on us. Plus nuns don’t usually own their convents. They generally take a vow of poverty. But let us proceed.

We also get “a particular area or place considered together with its inhabitants” as in “a rural community”. But in that case the “international community” isn’t nations, it’s all the people on the Earth. Although the next offering is “a body of nations or states unified by common interests.” As in “the European Community”. Which once again stretches credulity given the fractious nature of that body. But even the EU is certainly held together by common interests or values up to a point if compared to that group with “common interests” that includes Iran and Israel, North Korea and Taiwan, Russia and Ukraine and you get the idea.

A host of other unhelpful definitions follow. But they’re either too vague to be of use or involve language like “a feeling of fellowship with others, as a result of sharing common attitudes, interests, and goals” that clearly rules out the “international community” as a valid use of language. Even though the first entry in their standalone “Phrases” is “the policy led to widespread condemnation from the international community”.

The mystery of how two thematically opposite words like “global community” can be fused together is probably best solved if you simply take “community” in this instance to mean “the people in charge” who keep rubbing shoulders at their lavish international conferences and insular gatherings to talk about their grand plans for the world and after a while come to feel that they form a kind of community unto themselves. That they mentally equate it with the entire world is a small step once they have come to believe that they uniquely have the wisdom and virtue necessary to guide the unwashed masses into a bright and sunny future.

Now if this excursion into linguistics seems irrelevant, bear in mind that Trudeau claims it’s the very core of his policy. Canada is leading “the global fight against climate change” which is only possible if there is such a thing. And note that it’s not a global fight, it’s the global fight. The big one. The one everyone’s part of.

Then Murphy asks “Does Canada nullify China’s massive indifference to this whole hysteria? A massive country with a massive population is determined to have its place in modern life. Windmills will not take it there. It will use every energy resource, as long as it thinks it needs to, to get there. It will mine coal. It will build dams. It will seek gas and oil in every strip of land under its sovereignty, and import however much it wants…. Is there some thought in the PMO that the autocrats of China are checking into Trudeau’s Twitter feed?”

He also observes that far from following our example, Vladimir Putin took advantage of the similar naivete in “energy-dependent, global-warming virtuous, Europe” to lunge at Ukraine.

India, he also notes, is doing its own thing, which is not the thing we want it to be doing. “Is India following Canada’s ‘lead’ in the fight against global warming? It is an insult to think that such could be the case.”

To ask politicians to attach their words even to one another is a bit of a mug’s game, let alone to attach them to ideas which in turn attach to concrete data in the real world. But Murphy, cynical though he often sounds, utters the challenge. “Name those following us, Mr. Trudeau. Name the councils and assemblies of the world summoning the Canadian example as they cripple their energy sources, generate carbon taxes, and swear off oil and gas forever. Name one single country that has billboarded Canada as the reason they have gone net-zero. (You have several weeks to answer.)”

Murphy provides his own concluding answer: “We are not leaders in the fight against global climate change. We are stooges in a mock show of virtue signalling.”

Previous PostAnd if they don't know that...
Next PostIn praise of ineffectual government

3 comments on “What do you call a leader with no followers?”