And great was the fall of it

When you get an email teaser to a news story “House collapses into ocean and scatters debris for miles along North Carolina coast” you (a) feel badly for the owners but recognize that building a house on a sand spit in a storm-prone stretch of coast invites calamity, and (b) hope the story doesn’t blame it on climate change. Really. Because public debate is not well-served if everyone is acting out their enemies’ caricatures, and your own soul is not well-served if you hope your enemies are acting out yours. But if they are, there’s no use shutting your eyes to it. And sure enough: “A 2020 study published in the journal Nature Climate Change concluded that half of the world’s beaches could disappear by the end of this century as a result of climate change-induced coastal erosion and rising seas.” One flimsy structure and they go Greta on us. As we feared, rather than hoped.

Now you may say yes, and one flimsy story and you go anti-Greta on them. But it’s not one story. We focused last week on the New York Times brace of stories about the ski resort devastated by climate change that now gets only 16 feet of snow a year and is close to four others the phenomenon forgot entirely because it, and this one, are part of a pattern we think deserves attention, namely that the press increasingly prints absurdities on climate without any quick check whether they’re remotely plausible. No one fact checks off-hand lines like “an unprecedented surge of extreme weather as wildfires devastated the American West, hurricanes lashed tropical coastlines and a deadly winter storm brought the Texas power grid to its knees.” And it’s routine to say “Australia declared the koala endangered in the eastern part of the country Friday, with signs of climate change contributing to the marsupials’ declining numbers” even if “drought, wildfires and deforestation” are identified in the same story as the real and obvious culprits.

Of course in this mindset, if it’s bad, climate probably caused it, including the drought and even the urbanization. And now we get this debris from mental collapse washing up in NBC.

The fact that one house fell over on a beach and “sent debris floating for miles along beaches in North Carolina” is hardly even a story at all unless you live nearby. Local officials noted that people “should use caution when participating in recreational activities on the beach and in the ocean between the villages of Rodanthe and Salvo due to debris from a collapsed house”. You could hurt yourself on it, absolutely. It’s local news.

It might even be a bit more than local since it concerns the “Cape Hatteras National Seashore”. But one of the news story photos of the sad remains of the house, built in 1980 to the highest standards of quick and rentable beachfront vinyl siding, shows it next to a whole row of houses that did not collapse. And surely it is clear that global warming doesn’t single out one house any more than it does one ski resort.

If the entire beach had seen significant loss of structures, there might be something plausible to go on here. But you just can’t manufacture a global crisis from “Another ocean home vanished from Rodanthe in 2020, WAVY reported” even if “Beach erosion continues to affect properties in the area, and some homes built years ago that were farther away from the beach are now on the edge of the water, according to the station.”

We are not making fun of Rodanthe, by the way. It’s not a household name, at least not in our house, so we Googled and it looks cool. But let’s be frank: Once you see where it is, you would not find erosion to be an unexpected problem. It’s amazing the village is still there at all, in fact, because it’s on a narrow strip of sand way off shore in the Atlantic. 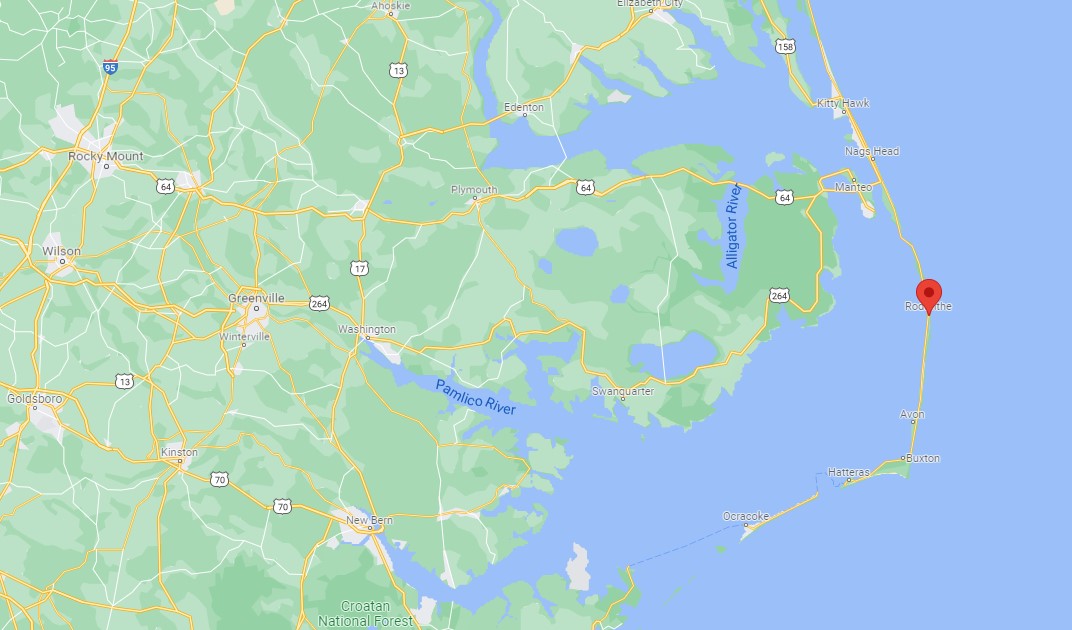 Google Maps
Still, it’s apparently not amazing to NBC. At least not looking backward. Forward, though, all is bleak. “As global temperatures continue to rise, driven by emissions of heat-trapping greenhouse gases, melting ice will raise sea levels and extreme weather events are expected to become more frequent and intense. That would batter vulnerable coastlines around the world, according to the researchers at the European Union’s Joint Research Centre in Ispra, Italy.” Batter. Ravaged. Heat-trapping. The march of rhetorical devastation continues. (And of the ludicrous “high-emissions scenario”, aka RCP 8.5.)

In the end, half the sand will die. “If those processes are left unchecked, they could result in the near extinction” of 50 percent of the globe’s sandy beaches by 2100, they said.” But if you think houses weren’t being washed away from North Carolina beaches before 2020, we have a seaside property in Tennessee we’d like to offer you. Seas have been rising since the end of the last glaciation, and it is well-documented that the rate has not increased in the last century.

The whole thing is just hooey. And not even plausible hooey. We don’t say it’s deliberately fake. We say journalists seem to have lost the capacity to think about climate at all. Which is bad for them, and for us. And we did see it coming, even though we didn’t want to.

One comment on “And great was the fall of it”