Letter to a critic: Dear Idiot

Despite the general certainty of alarmists that we deniers are evil blockheads we are always willing to engage in civil dialogue. For instance in response to this note from a “Dr. P. Hargrave” saying in full: “You are an idiot. Or you think we are. Chilly Glasgow? You know full well that climate change can only be seen over the course of decades. And that it has been proven, via long term statistical analysis, that it is occurring. Look out the window and see it? You are as stupid as the MAGA morons who think they know better than the scientists.” Naturally Dr. Hargrave proceeded to show us that Glasgow was chillier decades ago. No wait. He didn’t. But we have the Internet on our computers so we checked and guess what? Same dismal weather. Someone better tell “the scientists”.

Actually the data we obtained was not from within Glasgow itself, since the UK Met Office doesn’t include it in its list of historical stations, so we used the village of Eskdalemuir southeast of Glasgow, the nearest for which the UK Met Office provides monthly average temperature records back to 1914. We sent the data to University of Guelph economics professor Ross McKitrick and asked if there is a trend over the past 100 years. He wrote:

I took 100 years of data from January 1921 to December 2020 and selected the monthly average daytime highs. The trend coefficient is +0.09 °C/decade or 0.9 °C over the entire century, and it is not statistically significant. The fit looks like this: 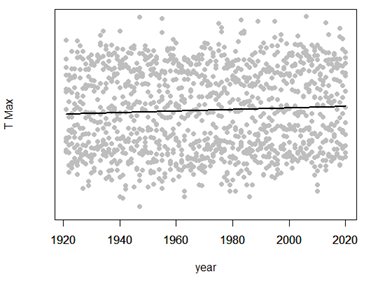 So much for that claim. And as with Glasgow, so with everywhere else. The general panic talking point is that we’ve seen 1.2°C of warming since “pre-industrial” times which seems to mean the Crystal Palace Exhibition of the wonders of the steam age rather than before James Watt. Mind you, another 0.3 will apparently finish off the penguins, polar bears and urban civilization. But sometimes it’s hard to focus on the catastrophic impact of such temperature changes because they’re so tiny you can barely even measure them.

Of course maybe the warming has been accelerating due to MAGA morons and other carbon polluters, so we asked Professor McKitrick what the trend is since 1971. And the answer is +0.23 °C/decade – aha, more than double the century-long rate. But it’s still not statistically significant, he reports. And looking at the post-2000 interval the trend is only 0.13°C/decade, almost back to the century-long rate, and very insignificant.

At this point we might dare suggest to those in high dudgeon and low tone that the reason papers like the Guardian keep running agonized “Few willing to change lifestyle to save the planet, climate survey finds” stories is that they do not think there is any need to “save the planet”, whatever that phrase even means, because of the fact that the weather today is not appreciably different than it was in their grandparents’ day. (And wait until the EU takes away their coffee in the name of fighting climate change and see how their spirit of planetary sacrifice holds up.)

Actually we do know what “save the planet” means, thanks to the Guardian also letting us know that “Climate experts warn world leaders 1.5C is ‘real science’, not just talking point/ Scientists say keeping temperature rises to 1.5C is vital physical threshold for planet that cannot be negotiated”, re COP26 where it got negotiated anyway. So another 0.3 degrees and it melts, bursts into flames, becomes a Dune-like arid sand ball or just keeps going the way it was. But let us base our conclusions on evidence. What the heck.

Thus last year we did an extensive “1919 or 2019” series challenging people who don’t think they know better than scientists to tell a year’s worth of temperature in various Canadian locations a century ago from very recently, which Dr. Harding doubtless aced. And we’re now doing “1920 or 2020” for Australia and who knows, we might do the UK.

Not that it’s really necessary when the smart sophisticated people with polished manners already know. But just in case.

Previous PostWe're so sneaky
Next Post1920 or 2020? Kerang Australia Edition

4 comments on “Letter to a critic: Dear Idiot”