No increase in Atlantic hurricane activity since 1860

We’re generally not fans of the dark art of manipulating past climate data because whenever the kludges are applied to temperature records they cool the past and manufacture a warming trend where none previously existed. But in the case of Atlantic hurricanes, a group of authors recently made the valid point that records prior to aircraft and satellite monitoring were incomplete because sometimes hurricanes formed where there was no one nearby to monitor them or measure the windspeed. Thus the fact that there is an upward trend in Atlantic hurricane counts from 1860 to the present doesn’t necessarily mean there were more storms, only that there were more measurements of storms. So they set up a model to work out how many hurricanes likely took place in the regions where no one was watching, and added them to the events that were recorded and, lo and behold, there has been no upward trend in either the number of hurricanes or the fraction of major hurricanes since 1860. Pending official adjustments to fit the narrative, of course.

The following chart shows the adjustments in red and the adjusted hurricane counts in blue. The annual data are in the top panel and the 15-year running mean is in the bottom panel. 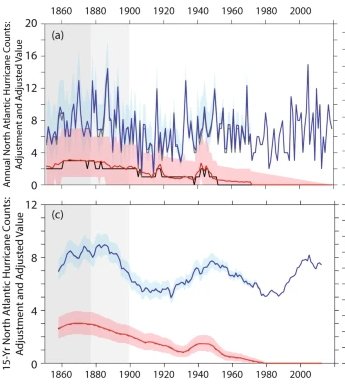 If anything, the 15-year running average is lower now compared to the late 1800s. Nor are hurricanes becoming stronger: The chart below shows the ratio of major hurricanes to all hurricanes. 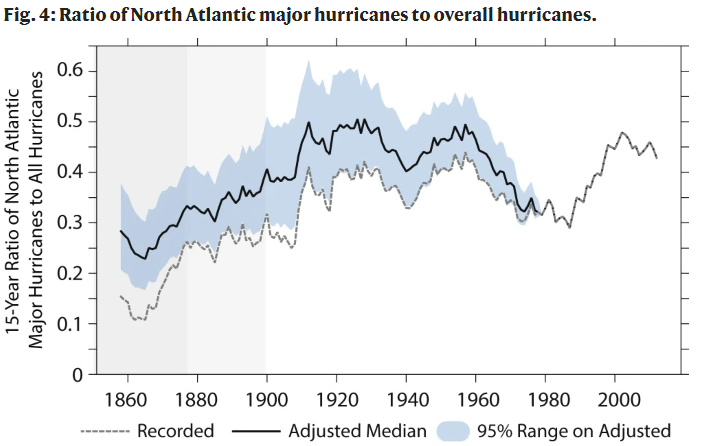 Without the adjustment (lower dashed line) there is a definite upward trend. But after adding in the missing records (yielding the thick black line) the period from1910 to 1960 shows generally worse conditions for major storms than recent decades.

We say kudos to the scientists who dove into the contentious business of measuring hurricane activity and published the results as they found them. And we’d say even louder kudos if such scientists would, once in a while, speak up to fact check the endless stream of politicians and journalists who keep telling us that climate change has caused hurricanes to become more frequent and intense.

Just as we would praise any scientists who will speak up against the latest exercise in dropping inconvenient climate data down the memory hole. Courtesy of Paul Homewood at Not a Lot of People Know That we learn that NOAA has deleted a web page that up until recently showed that the occurrence of medium and stronger tornadoes in the US has not increased since the 1950s, and the count of strong tornadoes has actually gone down, on which basis they concluded that tornadoes of all types likely haven’t increased either.

That page has been replaced it with a new one apparently showing that tornado activity has risen since the 1950s, based on counts of all tornadoes of all sizes. But what the old page noted, and the new page fails to mention, is that prior to the deployment of Doppler radar many small tornadoes were never measured, so the early tornado counts were only accurate for the medium and strong categories. By adding in the inaccurate data on small tornados an upward trend has been fabricated. The march of climate science is ever upward.