Journalists regularly seize on random local warm weather or rain events on Greenland as proof of unprecedented warming and the imminent collapse of the entire ice cap. But a new study by 15 mostly US-based Earth scientists looked at the landscape being revealed by retreating ice and found that the regions were ice-free not that long ago. The rocks reveal that Greenland was much warmer, and had less ice, compared to today, thousands of years ago. As in long before the SUV was invented. The minimum extent of ice may have occurred as recently as 5,000 years ago, then reversed to reach a maximum extent in some places about 300 years ago. And the authors note that in some places the Greenland Ice Sheet is still “at or near its maximum historical extent.” Which fits the temperature history they present: Greenland warmed rapidly early in the current interglacial period reaching a maximum temperature about 8,000 years ago, and has been cooling ever since.

The following graph summarizes their most interesting results. 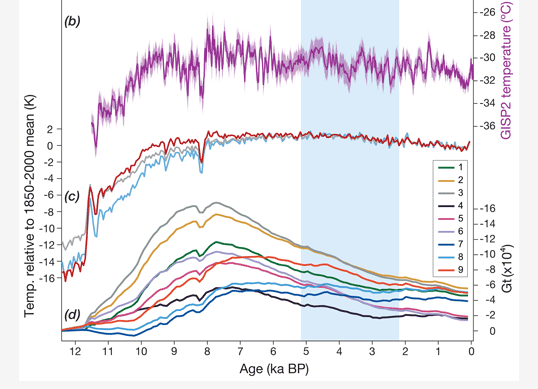 The purple line at the top is from an earlier reconstruction of Greenland temperatures (by different authors) showing steady warming from 11,000 years ago to about 8,000 years ago (punctuated by a sharp cooling between 9,000 and 8,000 years ago followed by a climate emergency), after which the continent steadily cooled right through to the modern era, hitting a recent maximum in the Medieval era, dropping to the Little Ice Age minimum in the early 1800s and then warming in the 20th century. The red line underneath it is another temperature reconstruction of southwestern Greenland showing the same basic pattern of early-Holocene warming, a peak around 8,000 years ago, and then cooling ever since.

The collection of lines at the bottom represent various reconstructions of the ice mass of the southwestern Greenland ice sheet over the last 12,000 years, which vary based on model assumptions. It looks like there used to be a lot more ice than there is now. But, the authors point out, note the reversed units on the vertical axis. The numbers are negative, meaning that the higher the line goes, the more ice is lost. Most models show the maximum ice mass loss between 7,000 and 8,000 years ago, though some place it closer to the present, and all show a generally steadily-growing ice sheet ever since, except during the Medieval period warming.

The authors conclude that while ice at the margin of the Greenland ice sheet is retreating, it is revealing land that used to be ice-free and only recently froze over. “Contemporary retreat of the [Greenland Ice Sheet] has yet to expose a landscape that remained ice-covered throughout the Holocene.” Somehow the world survived an earlier much reduced Greenland ice sheet. But this time it spells doom.