From CO2Science: In a very insightful paper published by 14 researchers in the journal Environmental Research Letters, Frank et al. (2017) ask the important question whether reducing greenhouse gas emissions in the agriculture sector can be accomplished without compromising food security. Their concern arises over reports that actions to mitigate greenhouse gases could negatively impact food supply by (1) diverting agricultural land into land used for energy (e.g. corn from feed to ethanol), (2) halting or slowing needed land conversion from high-carbon landscapes (forests) into agricultural production, (3) shifting from more to less greenhouse gas-intensive agricultural commodities (e.g., away from ruminant production), and (4) adopting greenhouse gas-reducing management practices (e.g., reduced fertilizer application), all of which strategies reduce greenhouse gas emissions but have the potential to raise product prices and lower food production.

Against this backdrop, Frank et al. utilized “a partial equilibrium model that covers the agricultural and forestry sectors, including the bioenergy sector,” to assess the implications of a carbon tax on agricultural production, food prices and dietary energy consumption. The model was run for five different carbon prices, which values correspond with the IPCC’s representative concentration pathway (RCP) scenarios for greenhouse gas emissions designed to limit the global temperature increase in 2100 to 1.5, 2.0, 2.2, 2.6 and 3.1 °C. And what did the model runs reveal?

Figure 1 below shows the relative product price change of nine commodities driven by a $150 per ton of CO2-equivalent (CO2e) tax (left panel), as well as the overall percent increase in the food price index (right panel, relative to the base year of 2000) for the world and various regions of the world. In all instances, the carbon tax raises the cost of food in all regions. The largest increases (60 to 100 percent) in the food price index are seen in those regions with less efficient agricultural production systems, such as Oceania, South East Asia, Sub-Saharan Africa, South Asia and Latin America, while for the world as a whole the price increase is around 38%.

Figure 2 depicts the relationship between greenhouse gas mitigation targets and global average calorie consumption projected for the year 2050. As seen there, increasingly ambitious efforts to stabilize the climate result in greater reductions in daily dietary energy. Using the RCP scenario that limits warming to 1.5°C, for example, a $190 t/CO2e carbon tax would reduce daily caloric intake by 285 kcal per capita per day, resulting in a 9 percent decrease. At first glance, such a decline may not appear that significant, but as Frank et al. note, “this would translate into a rise of 300 million people in the global number of chronically undernourished [individuals],” which is a whopping 150% increase above those presently fitting this category!

In summing up their findings, Frank et al. conclude that “a uniform carbon price across sectors does lead to trade-offs with food security at increasingly ambitious stabilization targets. This results from rising food prices driven by the adoption of greenhouse gas abatement strategies [that] limit agricultural land expansion and increase production costs for farmers targeted by the implementation of a carbon price.” Thus, they answer their question that started it all - reducing greenhouse gas emissions in agriculture does compromise food security. And that is a finding all policy leaders should wise up to if they want to avoid the undernourishment and potential starvation of hundreds of millions of persons just a few short decades from now. 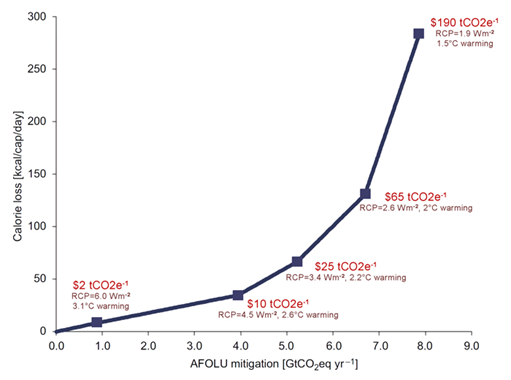 Figure 2. Global annual mitigation potential for the agriculture, forestry, and other land use sector (AFOLU) in GtCO2eq yr-1 in 2050 vs. global average loss in daily dietary energy (kcal per capita per day) consumption, compared to a baseline scenario without mitigation efforts. The blue line represents policies where all countries participate to achieve increasingly ambitious climate stabilization targets. Text adjacent to the blue squares indicates the carbon price (tax) associated in achieving climate stabilization for a given representative concentration pathway (RCP) and its associated global temperature reduction in 2050. Adapted from Frank et al. (2017).

Previous PostHow to feed the planet and its additional 1.5 billion persons 30 years from now
Next PostThe climate over-under