Aerosols on ice Part I

A new study just out in Science Advances provides a novel reconstruction of Southern Hemisphere air pollution from 1750 to the present. There are so many remarkable findings that it will take us two weeks to unpack them all. The authors dug out 14 boreholes from the Antarctic ice cap and one from the Bolivian Andes and examined the deposits of aerosols from the burning of forests and fuels over the two centuries and found to their surprise that fire activity in previous centuries was far higher than anyone previously thought. Meaning forest fire activity in the past was much higher than now, and (today’s topic), the climate cannot be as sensitive to greenhouse gases as IPCC models say.

How did they reach that last conclusion? Well, when scientists try to figure out how much warming is caused by CO2, they run into the problem that when we burn stuff we release CO2, which has a warming effect, and particulates or aerosols, which have a cooling effect. So when you look at the mild 20th century warming record, it could be the result of high sensitivity to CO2 offset by a lot of cooling from aerosols, or low sensitivity to CO2 and not much cooling from aerosols. Whichever model you use, both knobs need to adjust at the same time in the same direction (high influence or low influence) to make the result match the 20th century pattern.

In recent decades it has been widely believed that from the 1700s to the present aerosol levels in the Southern Hemisphere atmosphere grew by about 5-fold. That assumption is built into IPCC models. And it means that the sensitivity of temperature to additional CO2 must be pretty high to offset the significant cooling from those additional aerosols and give us the gentle warming we know happened in the 20th century. But the data from the ice cores tells a different story. 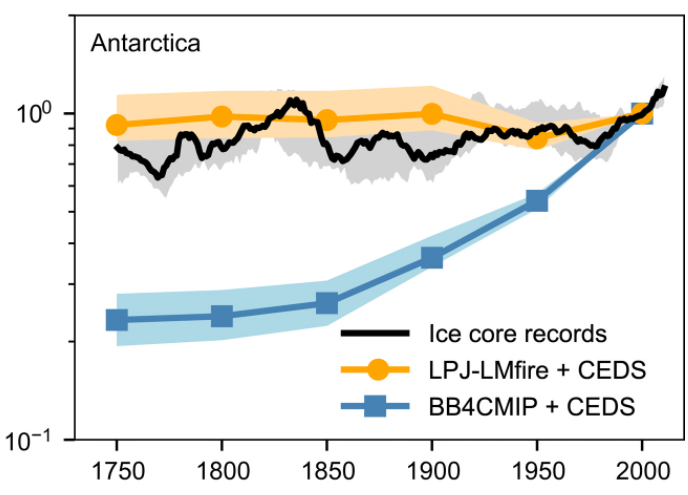 In this chart the blue line is the traditional modelers’ view of rising aerosol concentrations. But the black line is the new data from the ice cores and the orange line is from a new model that tries to fit the data better. (The data are scaled so each series ends at 1.0 in 2020, which they write 100 because that’s how geeky scientists spell one.) The key contrast is between the blue and black lines, because this new evidence shows that aerosol concentrations didn’t rise at all.

If so, there was almost no growth in aerosol cooling after 1850. And according to the authors that means trouble in the “settled” science of CO2 sensitivity.

An overly large aerosol cooling implies that models might overestimate [climate sensitivity] to reproduce historical temperature response. A recent study using one of the latest-generation CMIP6 climate models (E3SM) suggested that reducing both the magnitudes of negative aerosol radiative forcing and climate sensitivity yields a better agreement with the observed historical record of the surface temperature... Modest aerosol forcing and climate sensitivity values have also been suggested by other observationally based studies. Our improved fire emissions may help to bridge the gap between aerosol forcing estimates from current climate model simulations and the constraints from observations.

In an interview in the Daily Mail, the lead author Pengfei Liu of Harvard University put the matter in language a little less reminiscent of 100 and a little more of conversational English. According to the Mail:

Models may have overestimated the warming from greenhouse gases. While the world is “clearly” warming, as the team put it, the new findings suggest that it might not be heating up at quite the rate that was previously feared.... “Climate scientists have known that the most recent generation of climate models have been over-estimating surface temperature sensitivity to greenhouse gasses, but we haven’t known why or by how much,” explained Dr Liu. “This research offers a possible explanation.”

It’s remarkable to read of a scientist calmly telling a journalist that climate scientists know that the models overestimate warming and climate sensitivity. Funny that most of his colleagues don’t seem to have thought it worth mentioning to many reporters or politicians. Or other scientists, apparently.

So kudos to the team of scientists who dug out the ice cores, did the analysis, and then reported the results without spin. It gives us hope that the age of genuine science may not quite have passed yet.