From the CO2Science Archive: Forests play an important role in the global carbon cycle by sequestering large amounts of carbon from the atmosphere into plant tissues and ultimately into their soils. One of the ecologically-based concerns over potential CO2-induced global warming is that rising temperatures will disrupt this sequestration cycle and turn many boreal forest regions into sources of atmospheric carbon instead of sinks. If that were to occur, a positive feedback to warming would be established; forests would add more CO2 into the atmosphere annually than they take out, which would magnify global warming and exacerbate the further release of CO2 from these regions. But is there any support for this hypothetical concern out in the real world?

A recent study by Froelich et al. (2015) provides important new insight in answering this important question. In their analysis, the team of five researchers examined forestry CO2 flux data and various other environmental and meteorological data obtained at the Borden Forest Research Station over the period 1996-2013. This particular study site is located in “a mixed deciduous and coniferous boreal-temperate transition zone” near the southern tip of Georgian Bay in southern Ontario (44°19’N, 79°56’W) within the Great Lakes/St. Lawrence forest region.

According to Froelich et al., this region has been “identified as being particularly susceptible to climate change, and may experience substantial changes in forest composition, with northward migration of temperate species into boreal forest, as a result of small variations in climate,” as suggested by the studies of Fisichelli et al. (2013), Frelich and Reich (2010) and Leithead et al. (2010). And because annual air temperatures increased at the study site by 1.53°C over the 17-year period of analysis, this change in climate provided an excellent opportunity for the authors to determine how carbon fluxes responded to it and other environmental stimuli. Specifically, it was the two-fold aim of the authors to (1) “investigate the changing patterns of both CO2 exchange and meteorological variables across monthly, seasonal, annual, and multi-year time scales and (2) to identify the environmental and climatic drivers of interannual CO2 flux variability at this mixed temperate forest.” So what did they learn?

As illustrated in the figure below, gross ecosystem productivity increased (11.5 gC m-2 yr-1, p > 0.05) and respiration decreased (4.2 gC m-2 yr-1, p > 0.05) over the period of study, resulting in an overall average increase in net ecosystem sequestration (expressed as net ecosystem productivity) of 15.7 gC m-2 yr-1 (p > 0.05). And, therefore, the Borden Forest was found to be a “low-to-moderate [carbon] sink,” which finding, in the words of the authors, “provides more evidence contradicting traditional assumptions that mature forests are carbon neutral and not important as sinks in the global carbon budget (Carey et al., 2001; Luyssaert et al., 2008).” 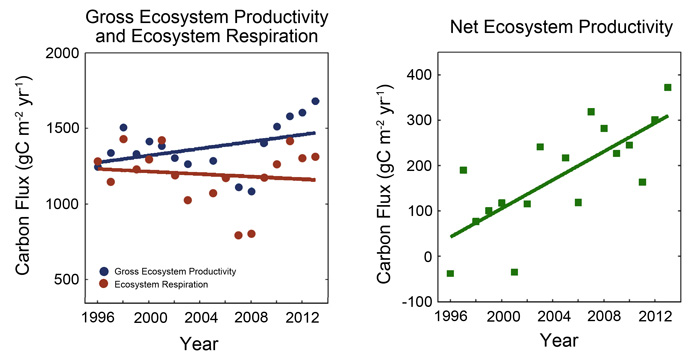 With respect to the cause of the increasing trend in forest sequestration, Froelich et al. investigated several possibilities, including air temperature, soil temperature, photosynthetically active radiation (PAR), vapor pressure deficit, precipitation and soil moisture. Correlation between the seasonal and annual means of these environmental variables and the CO2 fluxes revealed a complex set of relationships. However, in the concluding paragraph of their Discussion, they write “the absence of a hysteretic response to air or soil temperature may indicate that temperatures are the dominant environmental drivers of net ecosystem productivity in this system.” But they add that “once favorable temperature conditions are met and the biotic foundations are in place, secondary controls such as vapor pressure deficit and PAR become influential.”

Whatever the case may be, one thing is clear, the 1.5°C warming experienced in this boreal forest region did not produce the positive temperature feedback envisioned by the models. Instead of becoming a carbon source to the atmosphere, the Borden Forest became an increasingly great sink.

Frelich, L.E. and Reich, P.B. 2010. Will environmental changes reinforce the impact of global warming on the prairie-forest border of central North America? Frontiers in Ecology and the Environment 8: 371-378.

One comment on “Recent carbon dynamics in a Canadian boreal forest”