From CO2Science: A simple question often asked in the global warming debate that far too many get wrong is: What is more deadly to humans, hot temperature from heat waves or cold temperatures from cold waves? The answer, of course is cold temperatures from cold waves. Far more people die each year from temperatures at the cold end of the spectrum that they are accustomed to than at the warm end. Evidence of this well-documented fact is found in numerous research papers highlighted in the many reviews CO2Science has archived in its Subject Index under the heading of Mortality: Hot vs Cold Weather on this page. The latest research group to confirm this fact is Huber et al. (2020).

As their contribution to the topic, Huber et al. examined the temperature-mortality relationship of twelve German cities with populations greater than 500,000 persons, including Berlin, Bremen, Cologne, Dortmund, Dresden, Dusseldorf, Frankfurt, Hamburg, Hannover, Leipzig, Munich and Stuttgart. More specifically, this involved performing statistical analyses on daily time series of all-cause mortality and daily mean temperatures for each city over the period 1993-2015.

Results of the study revealed that the minimum mortality temperature (MMT; the temperature at which the fewest deaths occur) in the twelve cities ranged between the 82nd and 90th percentiles of the distribution of daily mean temperatures in the individual cities. Above (below) the MMT, the relative risk of heat (cold)-related mortality increases (see Figure 1).When combined for all cities, the median MMT was determined to occupy the 86th percentile of temperature, indicating the populations of these German cities are well-accustomed/adapted to warmer temperatures given their MMTs are all well-above the 50th percentile of the daily mean temperature distribution.

Total excess mortality attributed to non-optimal temperatures ranged from a low of 3.5% in Bremen to a high of 9.59% in Frankfurt, with an average of 6.3% for all cities. However, the vast majority of that mortality occurred from cold temperatures. Of the 6.3% of deaths attributed to non-optimal temperatures across all 12 cities, only 0.81% were attributed to heat while 5.49% were attributed to cold. Thus, deaths due to cold weather were 6.7 times higher than those due to hot weather. What is more, Huber et al. report “the effect of cold peaked a few days after the exposure and lasted up to 3 weeks, while the effect of heat was more immediate and vanished (or reversed sign, indicative of mortality displacement) after a few days.” In other words, some of those that died due to heat would likely have died a few days later and thus represent what is often referred to as an “early harvesting effect,” which suggests the true impact of hot temperatures on mortality is probably lower than determined here.

In light of the above findings, clearly, cold (not hot!) temperatures are what policy makers should be most concerned about when attempting to protect the public from temperature-related mortality events. 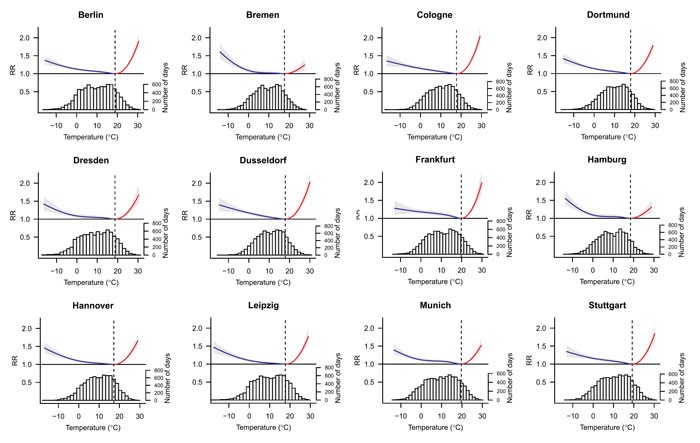 Previous PostThe sun, the sea and European temperatures
Next PostImpacts of CO2 on two grapevine cultivars