Fastest sea level rise since a short while ago

Sea level rise is not the same everywhere in the world. A glance at the world sea level rise map maintained by NOAA shows some places rising slowly, some fast and some even declining. One region that has been called a “hotspot” for rapid sea level rise is the Atlantic coast of North America from Cape Hatteras NC to Nova Scotia. (It probably should have been called a wetspot, but you get the idea.) And whenever something somewhere is happening faster than somewhere else, no matter what it is, it’s gotta be climate change. But not this time. A group of researchers decided to look back farther in time than the tide gauge record allows, by examining the records in coastal salt marshes to reconstruct local sea levels from 500 to 1,000 years ago. They found that the seas have been rising the whole time and that modern rates are about the same as they were in the 1700s. And they pointed out that previous studies based on short 20th-century records that blamed greenhouse gases don’t add up since the same rate of rise was happening hundreds of years ago.

One remarkable finding from their research is how steady the long-term rate of sea-level rise has been over the past millennium. The thousand-year Nova Scotia record shows that modern sea level rise is a continuation of the same slow process underway for at least a thousand years. 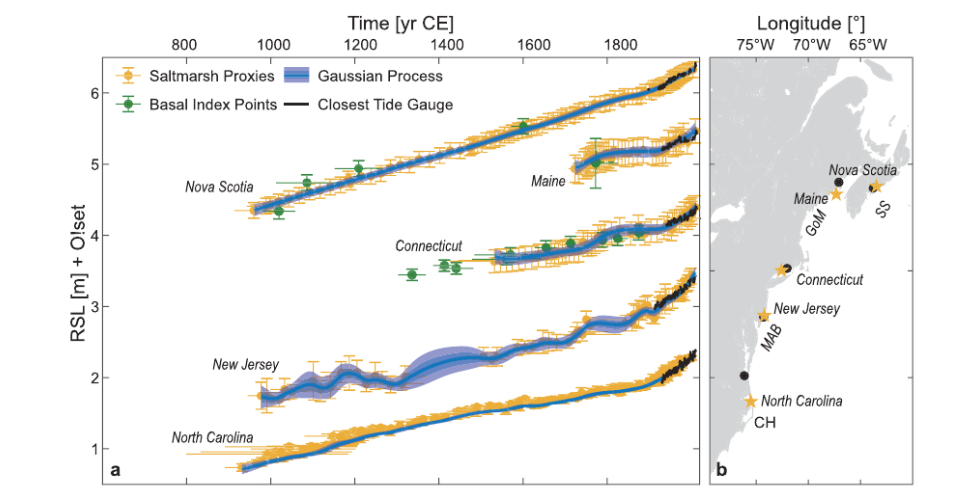 The authors sort through various natural explanations for relatively rapid sea level increase along the North Atlantic coast. They favor Arctic ice melt as the likely culprit, but then what explains the Arctic ice melt? One thing at a time. They chalk it up to natural atmospheric cycles. Whatever the story, if it caused sea-level rise to accelerate in the 1700s it can’t be your fault. Or, as the authors put it, “Our ﬁndings suggest that enhanced rates of sea‐level rise along eastern North America are not necessarily symptomatic of anthropogenic forcing.”

Previous PostFredericton: 1919 or 2019?
Next PostSpeaking of sea level rise not accelerating