Warmest ever, except for all the others

Between the Netflix walrus scam and the Environment Canada report about relatively rapid warming in northern Canada, it is important to put the Arctic climate in deep historical context. Ice core records (available at Professor Ole Humlum’s website climate4you.com) show that Greenland was substantially warmer for a long interval from about 8,000 to about 3,000 years ago. And Paul Homewood reminds us of a study from a decade ago confirming the point: the Arctic was warmer back then, for centuries at a stretch, than it is today. So where’s the catastrophe? The flooding? The dead polar bears and corals? 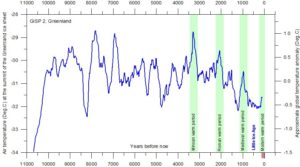 We need to see these data sets and have in our minds the information they convey because otherwise we can fall prey to the false message that the Arctic has never experienced temperatures like the ones being measured today. The point is not to argue that climate conditions aren’t changing in the Arctic. In the first place, it’s obvious from this chart that they are always changing. (Thus, ironically, so-called “climate change deniers” never deny climate change, unlike alarmists like Al Gore who claim climate was stable from 12,000 BC until 1972 and seem distinctly incurious about the more distant past.)

In the second, modern temperature trends are what they are, and it is plausible to suppose that increased CO2 levels are playing some role. But if today’s small warming will wipe out the polar bears, how did they survive the previous millennia when conditions were much warmer than they are now? And if a little warming today could trigger a runaway greenhouse effect by releasing methane trapped in the permafrost, why didn’t far larger warming do so previously? How could it get cold again around 3000 years ago, and 700?

Is it possible that not all climate feedback mechanisms are positive, that Gaia is more robust than we’ve been led to believe? Or that alarmists start with the verdict and then hold the trial?

Previous PostWait, greening?
Next PostOh no, our plan succeeded

2 comments on “Warmest ever, except for all the others”