Baby it's cold outside

Back in the day people used to dream of a white Christmas. Even if they were, say, a Jewish songwriter composing in the warmth of the American Southwest during a remarkably hot decade. Now like almost everything else it’s been politicized, from complaints of oppressive stereotypes of traditional Eurocentric patriarchal family life to the fact that climate alarmists want slush or drought to prove there’s a climate breakdown while skeptics hope for six feet of the fluffy stuff to prove there isn’t, and shoveling be hanged. But facts are facts, and much of the world is facing an unusually harsh start to winter or, south of the equator, summer, as the coldest December day in 50 years devastates the Tasmanian tourist industry and New South Wales, Australia, may actually have a white Christmas albeit not at sea level. As for the United States, well, imagine the news stories about climate if this exact map were being run but with deep red anomalies this far above normal. 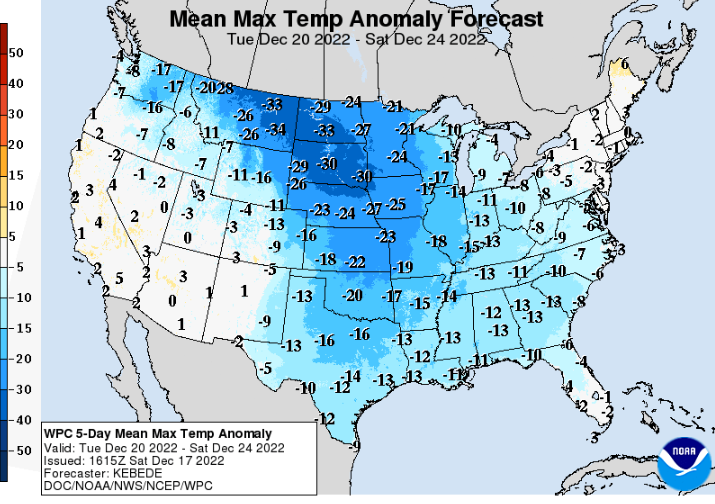 Our own home town is certainly getting the stuff in amounts that would have Frosty capering with glee. And as the normally climate-frenzied Australian Broadcasting Corporation put it about conditions there, “Pre-Christmas cold spell delivers snow and near-record-low summer temperatures” and it was even possible that Australia would get its first mainland white Christmas since 2006. It was however just weather, obviously:

“Short bursts of cold weather are far from unprecedented in early summer but normally last no longer than a day or two. The current spell of chilly weather is unusual in its longevity due to a blocking pattern where a high-pressure system stalls and prevents the usual eastward progression of pressure systems. A blocking high causes the weather to essentially become jammed, leading to a prolonged spell of invariable conditions.”

Should a heat dome develop, it won’t be some rubbishy matter of blocking highs. It will be the climate apocalypse.

Here we want to give NBC credit for not actually blaming climate change in a story that led off with “Two people in Louisiana have died and injuries were reported as tornadoes and storms tore across the Southern U.S. on Tuesday while Northern states faced blizzard conditions, officials said.” Just not very much of it because after giving considerable digital ink to the tornadoes it blurted out that:

“The severe weather in Texas occurred as a major winter storm was also pummeling Louisiana, with more than 10 million people under winter weather warnings or advisories across the Rockies and the northern Plains states. Another 643,000 were under blizzard warnings, mostly in Wyoming, South Dakota and Nebraska, according to the weather service.”

Yes, that would be Louisiana, the famous steamy swamp state at the mouth of the Mississippi River. Which is rather more surprising than snow in Wyoming in December (though if the snow some were projecting for the Gulf of Mexico appears it would surely raise eyebrows) and naturally does not prompt media outlets to mention the c-word. But the extent of the cold spell is a bit hard to explain, including wind chill forecasts from -26°F in Wichita, KS, to -46°F in Bismarck, ND, given the relentless claims of runaway warming. And, NBC says:

“In the frigid weather in the Northern part of the country, all roads from Nebraska into Colorado were closed Tuesday because of the major winter storm, which included very low visibility, the Nebraska Transportation Department said…. Westbound Interstate 70 was closed near the Kansas-Colorado border because of fear of dangerous winter weather”.

It’s beginning to feel a lot like Christmas. At least in terms of the snow we once hoped for in vain by Dec. 25 but seem to be getting this year in abundance.

Previous PostA 654-year streamflow history of Argentina's Neuquen River
Next PostWhose side are they on?

4 comments on “Baby it's cold outside”