Learning to live in a warming world: how pool frogs do it

From the CO2Science Archive: Writing as background for their work, Orizaola and Laurila (2016) state that “to persist under changing environmental conditions, organisms can respond through migration, plasticity and/or genetic adaptation.” However, they add that “due to habitat fragmentation and low dispersal capacities, many species must respond to environmental change in situ,” citing Chevin et al. (2010). Curious about this situation, the two Swedish scientists “examined variation in developmental plasticity to changing temperature in the pool frog (Pelophylax lessonae) across its distribution by studying populations from central areas (Poland), edge populations (Latvia) and northern marginal populations (Sweden).”

In commenting on the significance of these findings, Orizaola and Laurila write that “the detection of high levels of developmental plasticity in isolated marginal populations suggests that they may be better able to respond to the temperature regimes expected under climate change than often predicted, reflecting the need to incorporate geographic variation in life-history traits into models forecasting responses to environmental change.” And they further note, in this regard, that populations of some species at the geographic margins of their distributions “may be more capable of buffering environmental change than previously expected.” 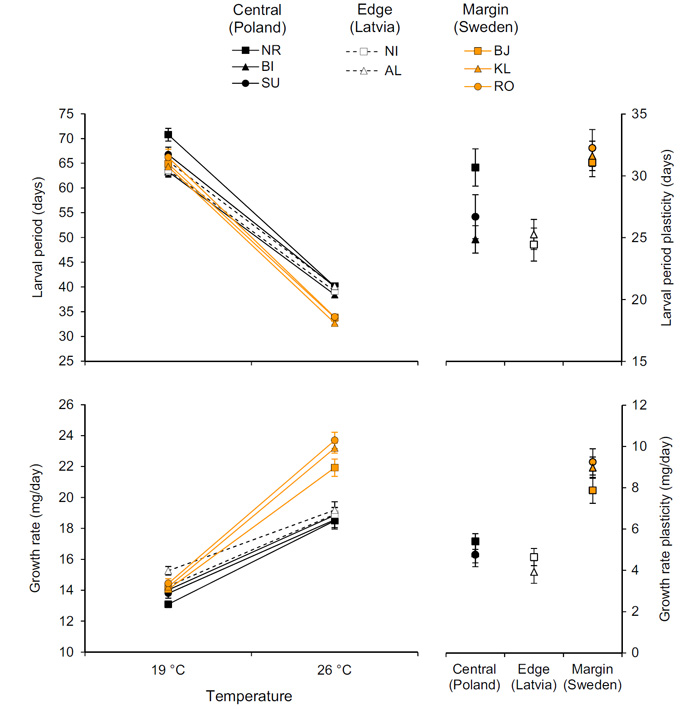 Reaction norms and plasticity for the duration of the larval period (top panel) and growth rate (bottom panel) of Pelophylax lessonae from central, edge and northern margin areas reared at two temperatures. Source: Orizaola and Laurila (2016).