In our examination of the latest peer-reviewed survey of extreme weather events we have repeatedly found an absence of trends, whether in droughts or hurricanes or extreme precipitation or other such metrics. But in this our final week we have to acknowledge that there is one disaster series showing a strong upward trend across the 20th century, roughly matching the pattern of global warming: 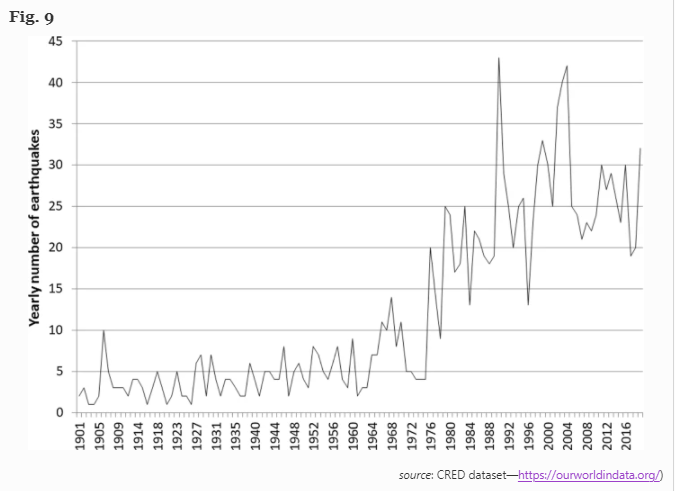 Now do you believe humans are upsetting the delicate balance of nature? Except this chart shows the number of reported earthquakes, and not even in the deepest, gooiest bogs in the alarmist fever swamp will you find anyone claiming greenhouse gases cause earthquakes.

OK, you will. And it’s NASA. But never mind, because the people who publish the data don’t even claim there’s an upward trend in actual earthquakes, only in the number that got reported. Specifically they note: “one major contributor to the increase in disasters occurrence over the last decades is the constantly improving diffusion and accuracy of disaster related information.” In other words there probably used to be about as many earthquakes and other disasters as there are now, but relatively few made it into official records until the modern era of mass media. And this biases all the trends in disaster counts, which is a very important thing to keep in mind when hearing casual claims about rising rates of natural disasters.

Putting all natural disasters together yields an even more striking rise: 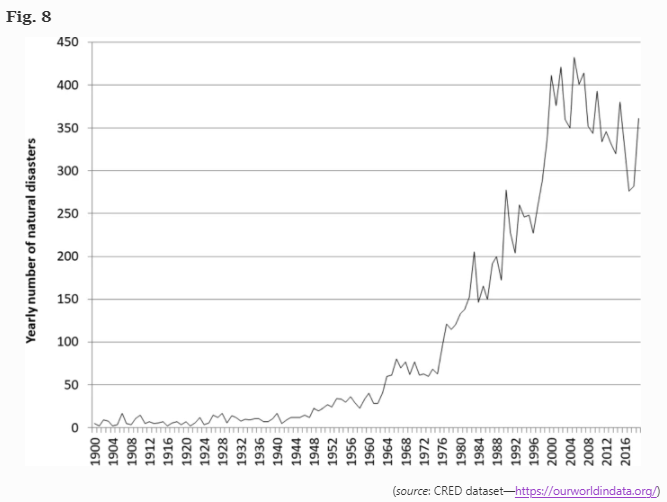 The authors ask: Is it really the case that natural disasters soared throughout the 20th century, then started trending down this century? And they argue that the answer is no. Instead, “the main reason of the increase in the second half of the twentieth century is the growing reporting capacity of individual states and [since] this capacity has stabilized on a reliable level, the number of disasters has become stationary or has even gone down.”

And so we leave you with the wise words of the authors of the paper we have been examining:

Leaving the baton to our children without burdening them with the anxiety of being in a climate emergency would allow them to face the various problems in place (energy, agricultural-food, health, etc.) with a more objective and constructive spirit, with the goal of arriving at a weighted assessment of the actions to be taken without wasting the limited resources at our disposal in costly and ineffective solutions. How the climate of the twenty-first century will play out is a topic of deep uncertainty. We need to increase our resiliency to whatever the future climate will present us.

We need to remind ourselves that addressing climate change is not an end in itself, and that climate change is not the only problem that the world is facing. The objective should be to improve human well-being in the twenty-first century, while protecting the environment as much as we can and it would be a nonsense not to do so: it would be like not taking care of the house where we were born and raised.