This won't hurt a bit

The French for “air conditioning” is “climatisation”. But the real goal, understandably, is more or less the reverse. We go to a lot of trouble to keep climate out of the house by burning fossil fuels to cool it or warm it as the weather requires, to make cement for our foundations, and also to turn them directly into spray foam insulation for insertion into the walls. The idea that life should be without discomfort extends to climate action, which we are promised by some recent bank ads (which we won’t link to since all the banks are equally woke on this topic) which require only that we use their credit card instead of whatever one we currently have, because with every purchase they will chip in to the cost of planting trees. “Planting just 8 trees a month could make you climate positive by removing more CO2 from the air than the average Canadian produces each year… If 8 trees were planted every month for a year, that would be 120 trees” and we’ll stop there because 8 times 12 is 96. But why would a bank be expected to get arithmetic right, or forest management for that matter?

The average Canadian supposedly produces 42,000 lbs of carbon while, according to the bank, “Mangrove trees” absorb 500 lbs per year and last 25 years. Regrettably after 25 years the tree dies and releases its carbon and anyway there’s no such thing as a “Mangrove tree”; instead “There are about 80 different species of mangrove trees. All of these trees grow in areas with low-oxygen soil, where slow-moving waters allow fine sediments to accumulate.” And in tropical or subtropical areas, at the boundary between fresh and salt water. So where exactly we’re going to find room for all these dang things isn’t quite clear. But never mind. It’s the thought that counts, even if the thinker can’t count.

The point is you can be virtue-signal-positive with no sacrifice at all. Climate crisis? What climate crisis? Let’s go shoe shopping.

Like the vision of the United States saving the planet from climate breakdown by using electric bicycles, “especially cargo models that can carry kids and groceries”, presumably bought with carbon-sucking credit cards and used in climates where the end of winter actually materialized, it first sells us a mind-bogglingly awful crisis then flips it aside with a few trendy gestures.

Perhaps they have in mind something like this: Henry Ford’s 1896 “Quadricycle“, except powered by a five-hundred-pound battery manufactured by slave labour using thousands of pounds of ore extracted in some country environmentalists don’t have to look at instead of its cumbersome polluting gasoline engine. But let us not be detained by practical issues. 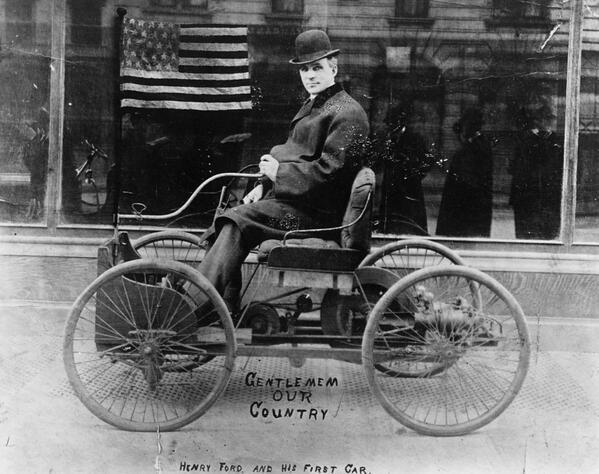 The point is that this notion of saving the planet with some trifling sacrifice, like Climate Home News thinking the U.S. just needs to send $11.4 billion to Third World countries by 2024 “for the developing world to cut carbon and cope with climate impacts”, is hard to reconcile with the equally firmly entrenched view that the slightest careless gesture on our part will shred the environment for good. Thus in a luridly titled video “Fashion’s naked truths” that does not end up showing us various underdressed models as certain old-tyme television programs were famous for doing. Naked was just clickbait to draw us into the Economist’s nag that while we are all frivolously purchasing then discarding garments at a far faster pace even than our parents, employing some 300 million people worldwide, “it’s a fashion statement with a steep environmental price tag. Making one kilogram of fabric produces 23 kilograms of greenhouse gasses. Textile production generates more carbon dioxide than all international flights and maritime shipping combined…. Fashion is now considered the second most polluting industry in the world after oil.”

Polluting here, of course, means GHGs and nothing but. Perhaps we are old-fashioned. But we think things like mining rare earths for batteries generate a good deal of what used to be called pollution, stuff that actually harmed human beings. And speaking of old-fashioned, we also think the prospect of more of the people on Earth being better housed, better fed and dressed in quality garments not dirty rags is good. But the Economist begs to differ from its warm, safe homes and London fashions: “If 80% of emerging markets reach western levels of clothes shopping, carbon dioxide emissions could increase by nearly 80% per person. By 2050, total clothing sales could reach 175 million tonnes, turning the planet into the biggest fashion victim of them all.” The fact that it ends by declaring that the article was supported by a major fabric producer suggests that companies are bigger fools or worse knaves than anyone suspects.

P.S. When we say insulation is made by “converting directly” from petroleum what we mean is “Graft polyols (or polymer polyols) are prepared by grafting both acrylonitrile and styrene monomer or acrylonitrile alone to conventional polyether polyols.” It takes a lot of work to keep life simple and comfortable. And it’s not work you’d mostly want to do by hand.

Previous PostSo does Canada get serious?
Next PostIs it wet or dry down here?

2 comments on “This won't hurt a bit”