From the CO2Science archive: According to model-based predictions, larger and more intense wildfires will increase as a result of CO2-induced global warming; and as a result, many scientists have begun to search for a link between fire and climate. The latest research team to do so is that of Earl and Simmonds (2017), who examined the spatial and temporal patterns of fire activity for Australia over the period 2001-2015. Their time period of selection allowed them to utilize satellite data from the MODerate resolution Imaging Spectroradiometer (MODIS) sensors on the Terra and Aqua satellites, which they say allows for “a more consistent and comprehensive evaluation” of fire trends. Using such data, fire count numbers were derived from an active fire algorithm, which fire detection scheme was judged by the authors to be superior to other methods and which allowed them to calculate seasonal and annual fire activity on a 0.1° x 0.1° grid box scale (~1000 km2).

Results for the country as a whole are presented in Figure 1 below. As shown there, annual fire numbers for Australia have decreased across the past 15 years of study, albeit the decrease is not statistically significant. Seasonally, the most abundant fire season was in the spring (48% of all fires), followed by winter (21%), summer (16%) and fall (15%). Summer was the only season found to exhibit a statistically significant trend (p < 0.05), showing a decline over the period of record. 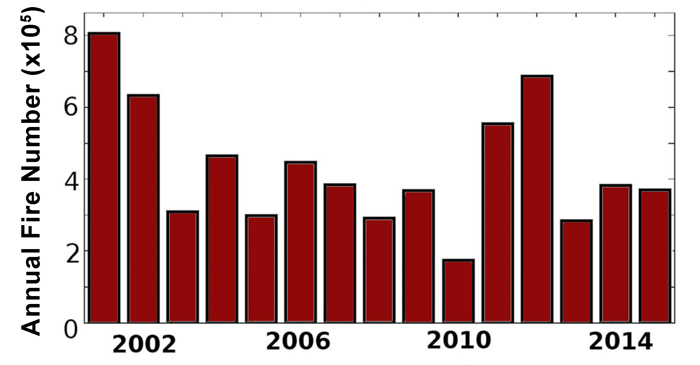 With respect to possible climatic drivers of annual fire number statistics, Earl and Simmonds conducted a series of analyses to explore their relationship with large-scale climate indices, including ENSO, the Indian Ocean Dipole and a precipitation dataset covering the continent. Their results revealed some significant relationships across both space and time. Surprisingly, however, the authors did not conduct an analysis between the fire records and temperature, which omission we have remedied in the figure below. As illustrated there, a statistically significant relationship exists between Australian temperature and annual fire counts, such that a 1°C temperature increase results in a 2.39 x 105 decline in annual fire count. Consequently, these data would appear to contradict climate-alarmist claims that rising temperatures will increase fire frequency. 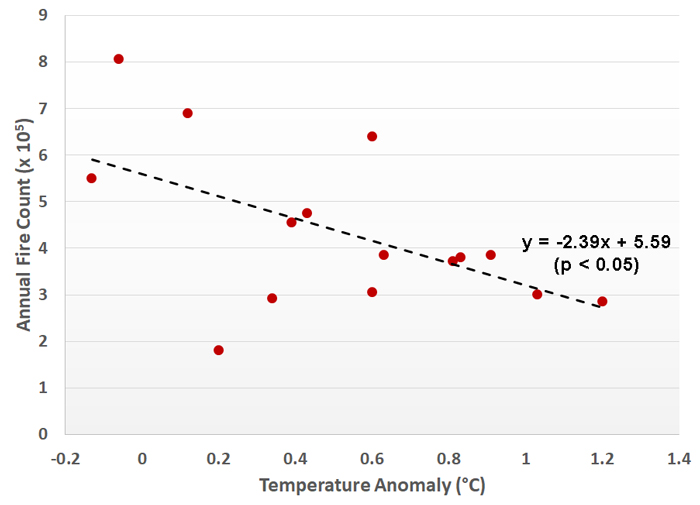 Figure 2. The relationship between the annual number of Australian fires and Australian temperature anomalies over the period 2001-2015. Adapted from Earl and Simmonds (2017).

Previous PostYes, that sun
Next PostTen years after the end of winter

One comment on “Declining trends in recent Australian fire activity”