The song of Song (and Tang)

The Song and Tang dynasties in China spanned over six centuries beginning in 618 AD. It was an especially prolific period for poetry in part because it was a required subject for the Imperial Examination System which selected young candidates for the civil service. Many poems were based on simple observations of the recurring seasons, which might have made for dull poetry but is now seen as a treasure trove of data on China’s climate history. One of the nice features of ancient poetry as climate data is that if a poem said something about the first appearance of a frost or the return of the geese to the river that connects it to a recognizable date, it was incidental to the theme of the work and so it’s unlikely to have been fiddled with in order to manufacture a warming trend. A group of Chinese scholars (h/t Kenneth Richard) is working through the vast storehouse of ancient Song and Tang poetry and thus far has determined that central China was 1-2C warmer than today for much of the Tang Dynasty between 600 and 900 AD.

The evidence from the newly-examined poetry records compares well with other indirect evidence. The authors summarize their findings in the following chart covering the Tang Dynasty. 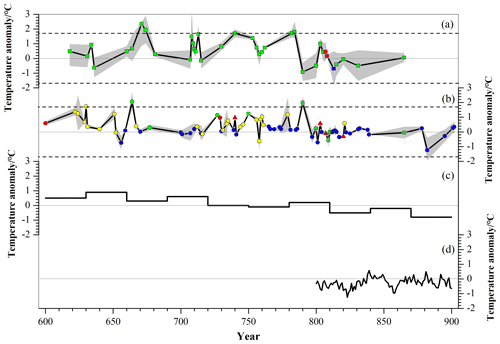 The top line is the temperature record inferred from clues in poetry. The next two lines are  inferred temperatures from similar study in 2016 and 2003. And the last line is from an Asia-wide tree ring-based temperature reconstruction in 2013. The zero line indicates the average temperatures in central China from 1961-1990.  All three records from literary sources agree that temperatures for much of the Tang Dynasty period were 1-2C warmer than the modern era.

It’s an interesting data set. Now we just need to make sure the data fiddlers at NASA don’t take up Chinese poetry.