Four decades of bird range change along an altitudinal gradient

From the CO2Science Archive: In providing the background for their study, Kirchman and Van Keuren (2017) write that “climate niche models of boreal forest bird breeding ranges predict large shifts to the north and west in the coming decades, leading to extirpations in New York and New England as populations are pinched off the tops of mountains in the Catskills, Adirondacks, Green Mountains, and White Mountains,” citing the works of Rodenhouse et al. (2008) and Ralston and Kirchman (2013). To test this hypothesis, the two researchers repeated an altitude range survey of birds in the Adirondack Mountains that was conducted four decades previously by Able and Noon (1976), which allowed them to “assess changes in the upper and lower range boundaries of forest birds in the context of regional, long-term climate data.”

Paper reviewed: Kirchman, J.J. and Van Keuren, A.E. 2017. Altitudinal range shifts of birds at the southern periphery of the boreal forest: 40 years of change in the Adirondack Mountains. The Wilson Journal of Ornithology 129: 742-753.

The repeated survey involved conducting roadside bird counts of all individually seen and heard species of woodpeckers, hummingbirds and passerines at dusk and dawn at seven locations along an altitudinal transect from 500 to 1425 meters. The original 1974 survey was conducted on the north-facing slope of Whiteface Mountain on July 11-12, while the repeated survey was conducted at the same location on July 9-10, 2013 and June 30-July 2, 2014, as well as on a subset of survey stations on June 2-3, 2015.

And what did the study reveal?

A total of 49 species were detected in the most recent survey as opposed to 44 species four decades earlier. Of the 49 species noted in 2013-15, seven were new species not found in 1974, leaving two species that were undetected in the repeated survey. Thus, from a biodiversity standpoint, species richness was higher in the most recent survey. Figure 1 below illustrates this fact, showing that the number of species in six of the seven transect locations was greater in 2013-15 than in 1974.

With regard to the range locations of the bird species, Kirchman and Van Keuren report that abundance-weighted mean altitudes were higher in the most recent survey, with 26 species shifting upslope, 11 downslope and 5 remaining the same (see Figure 2). However, with respect to the sizes of their ranges, they note that 12 now maintain a wider altitudinal range, 9 a narrower range and 21 have a similar altitudinal range breadth as documented in 1974.

In commenting on their work, Kirchman and Van Keuren state that their results “indicate that predictions based on climate niche models (Lambert et al., 2005; Rodenhouse et al., 2008; Ralston and Kirchman, 2013) of birds being pushed off the tops of mountains at the southern periphery of the boreal forest are not yet being realized.” Furthermore, they “caution that some of the changes to the Adirondack avifauna that we have documented may not be responses to climate warming,” pointing out that “the weighted mean altitude shift we observed (+82.8 m) is far less than the adiabatic lapse rate would predict based on the warming in the Adirondacks between 1974 and 2014 (+324 m for the 1.88 °C increase in maximum daily temperature, +424 m for the 2.46 °C increase in daily minimum temperature).” This may be due to the fact that climate niche model predictions “ignore the many complexities of niche tracking, assume a simple linear response to temperature increase, and do not account for the many ways one could calculate temperature change from 40 years of weather station data or calculate the combined altitudinal range shifts of many species.” In any event, one thing is for certain, the 40-year warming of the Adirondack region has led to increased bird species richness and a general expansion and upslope shift in their ranges, which findings are a far cry from the concerns of climate alarmists who predict the birds’ extinction by being pushed off the tops of their altitudinal ranges due to rising temperatures! 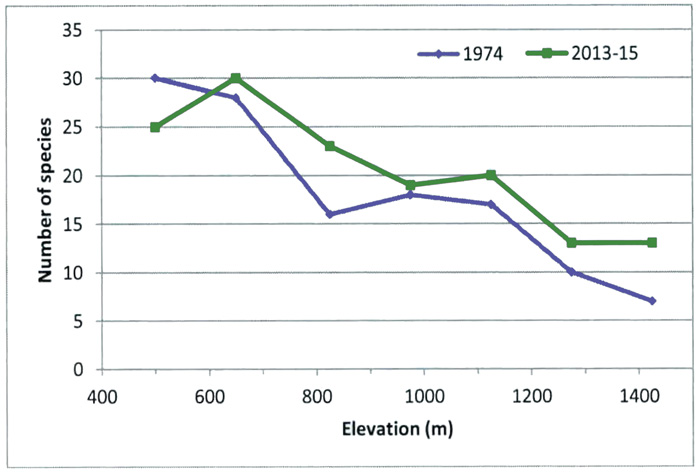 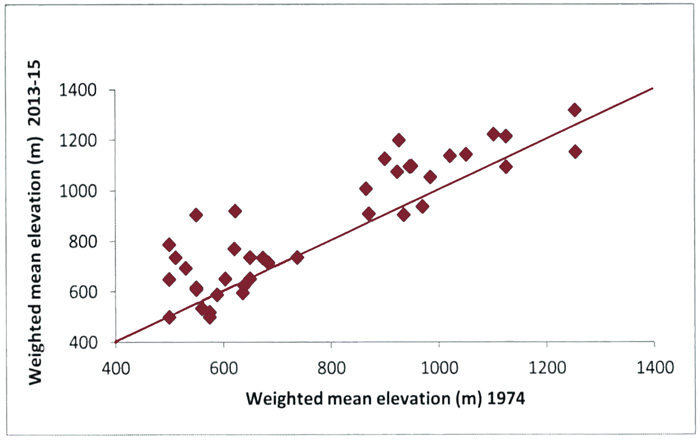 Figure 2. Abundance-weighted mean altitudes, in meters above sea-level, of 42 bird species encountered on Whiteface Mountain, NY, in 1974 and in 2013-2015. The diagonal line indicates equal elevation in both survey periods such that points above the line represent upslope shifts and points below the line represent downslope hift. Source: Kirchman and Van Keuren (2017).