A year unlike all the others

It is now habitual to look back around the beginning of January and declare that the past year was the most climate changey ever. And sure enough, BC premier John Horgan reacted to a cold snap by declaring that “For many, this will be remembered as the year that climate change arrived on our doorsteps. Here in B.C., we faced record-setting droughts, heat waves and forest fires, floods and mudslides.” Though if you had asked him last year he’d have said the same thing about 2020. And just listen to his Minister of “Environment and Climate Change” George Heyman: “We’re seeing and living the effects of climate change, whether it’s extreme weather, whether it’s droughts, whether it’s the two worst wildfire seasons in B.C. history, back-to-back…”. On Dec 5, 2018. Still, the ritual must continue, albeit with an increasingly ritualistic feel.

Thus Discover magazine plods in with “Did 2021 Deal a Fatal Blow to Climate-Change Denial? Data and extreme weather events are making it harder than ever to ignore our warming world. But climate change denial has also taken on a new form.” Apparently we’ve become delayists or something since pronouncing us dead has gotten old.

Discover, using one of those fire photos with a distorting red filter in the name of objectivity, claims that “From brutal heat in North America and Siberia to devastating flooding in China and Europe, 2021 delivered worsening climate extremes of the kind long predicted by scientists. Streetcar cables melted in Portland. A raging river swept away entire homes in Germany’s lush Ahr Valley wine region. And wildfires have set records across the globe in the past two years.” The author, being alas a professor of journalism rather than a “climate scientist”, doesn’t seem to know how to Google wildfire trends.

Meanwhile Canada’s public-payroll alarmist-in-chief, not the volatile freelance David Suzuki but the dependable state climatologist David Phillips, declared that “Not in 26 years of releasing the Top 10 Weather Events has there been anything comparable to this year, where Canadians endured such a stream of weather extremes.” 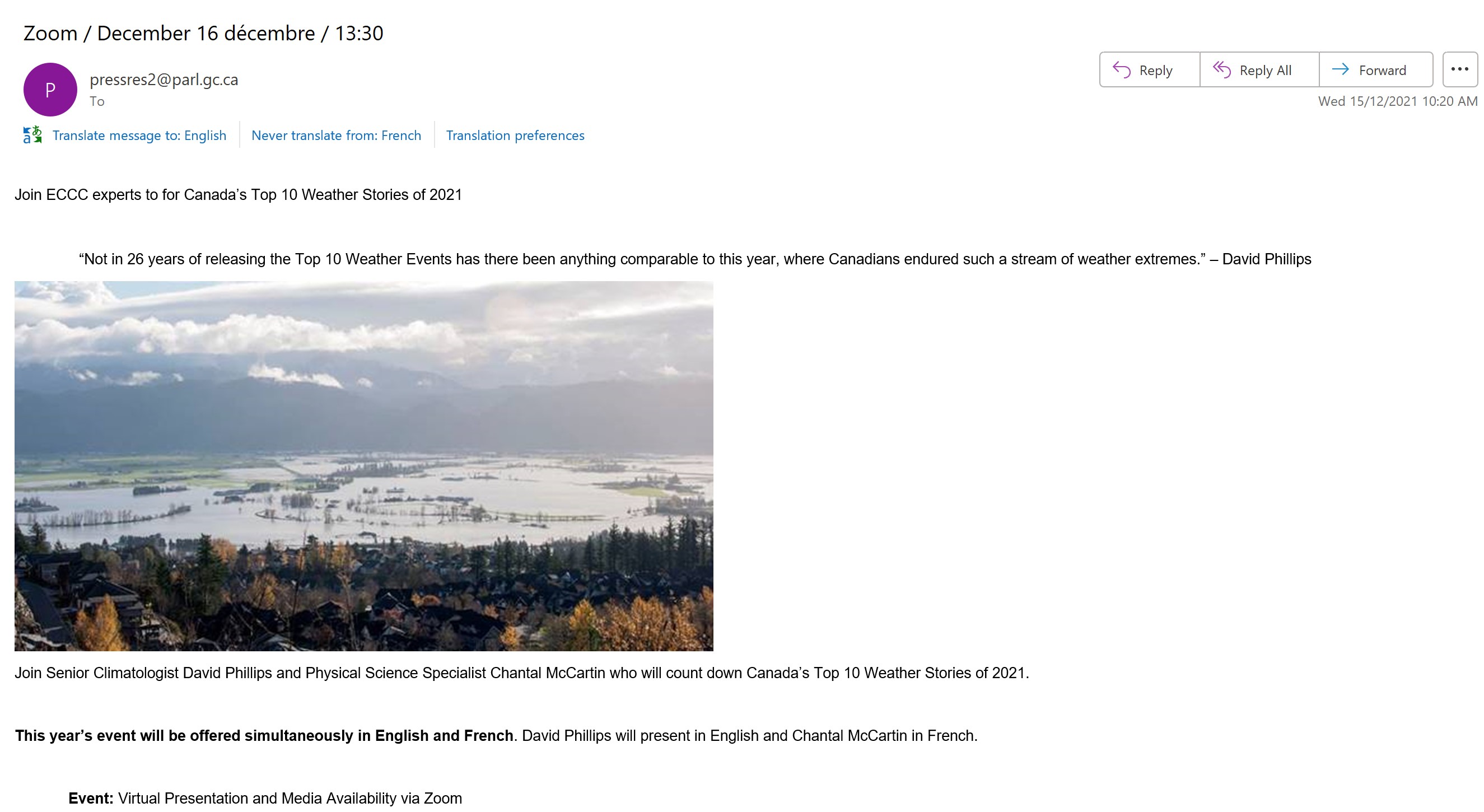 This quotation was included in a Dec. 15 press release mysteriously not available on the relevant ministry site, although they do have one saying “Today, Environment and Climate Change Canada presented the 26th annual edition of the Top 10 Weather Stories in Canada. This year’s stories clearly demonstrate that Canadians across the country are experiencing unprecedented extreme weather, in the form of devastating flooding, widespread wildfires, relentless heatwaves, and powerful tornadoes. Scientists have made a clear link between climate change and more frequent and severe weather events, which is why the government is committed to reducing greenhouse gas emissions to help prevent the impacts of climate change and investing to increase resiliency.”

Scientists have made a clear link. And politicians have made a clear headline. The government-run and funded CBC reliably parroted the government line, saying “Environment Canada has released its Top 10 weather stories for 2021 — a year that its senior climatologist Dave Phillips calls the ‘most destructive, the most expensive and the deadliest year for weather in Canadian history.’ Though this is the 26th year that Phillips has created the list, he said: ‘No year compared to this year.’ ‘The events are bigger and badder and more impactful now than they were just 20 years ago,’ he said. While scientists have been raising the alarm over climate change for decades, in the past, it has appeared gradual, subtle and distant, Phillips said. ‘I think this is the year that Canadians saw it firsthand.’”

Again, you would not know from his pronouncements in 2020, or 2016, that he regarded climate change as gradual, subtle or distant back then. (Or perhaps that “badder” was a word; the comparative used to be “worse”. Climate change even ruins grammar, apparently.)

Indeed a year earlier we heard that “Environment and Climate Change Canada’s Senior Climatologist, David Phillips, and Physical Science Specialist, Chantal McCartin, have released the 25th annual edition of Canada’s Top Ten Weather Stories. The report indicates that Canada is warming at nearly twice the global rate with parts of western and northern Canada warming three or four times the global average. Sea ice in the North is thinning and shrinking, and our unique ice shelves are crumbling into pieces. While Canada is still the snowiest country, less snow is falling across the south.” And the year before that “For 24 years, Environment Canada climatologist David Phillips has been pulling together an annual list of Canada’s most devastating, frustrating and thrilling weather stories. But as the effects of the climate crisis set in, this year felt different, he said. The stories Phillips had to choose from ⁠in 2019 — tales of historic floods, wayward hurricanes and tornadoes in the Arctic ⁠— have become more extreme and variable than ever.”

So let us guess: 2022 will feel different too, with unprecedented blah blah blah whatever just happened constituting unprecedented and final proof of climate change that ends the debate again.

Previous PostJust the facts, methane
Next PostDon't look, or listen, up

8 comments on “A year unlike all the others”