Back in November we quoted the Minister of Natural Resources about methane, the new climate villain, being “responsible for around 30 percent of the global rise in temperatures to date”. We also contacted the ministry prior to publication to inquire into the source of that number. As you may imagine, the result was email ping-pong while they convened an Interdepartmental Committee (of Yes Minister fame): “We are engaging with other Federal Departments to draft a response.” We pointed out that they used the number so we hoped they would know why. They did not. Ultimately Environment and Climate Change Canada Googled something plausible. Your tax dollars at work, folks.

Part-way through the inquiry we were passed without our consent to Environment and Climate Change Canada, which is apparently experiencing higher than normal call volume or something: “Please note, due to exceptional circumstances, our teams have limited resources.” Even though they boast elsewhere of employing “nearly 7000 people”. We wish we had such limited resources, or even one one-thousandth of it. Or of their budget of $2 billion.

Still, they eventually managed to do an online search and after the initial inquiry, informed us that “Figure 7.7 in the Intergovernmental Panel on Climate Change (IPCC) Sixth Assessment Report Working Group I (WGI) report shows a best estimate of the warming induced by changes in methane concentrations in 2019 relative to 1750 of 0.28C, relative to a total of 1.27C. This is 22%. If attributing to changes in methane emissions (rather than concentrations), the fraction is much larger. Figure SPM.2 of the IPCC assessment report shows that between 0.29 and 0.84 C of warming in 2010-2019 relative to 1850-1900 was due to methane emissions. This is 28-79% of the observed warming of 1.06C over this period, a range which encompasses the quoted percentage of 30%.”

Interesting if true, as Gertrude Stein was wont to say. And if you’re interested, here is Figure 7.7 from the IPCC report: 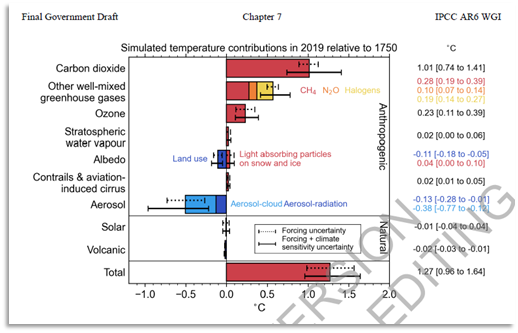 In any case this assessment is not relevant. For as we responded to Environment and Climate Change Canada, “Is that where the Minister of Natural Resources got the number? It was my original inquiry.” To which, as with Hamlet, the rest was silence… other than a chirpy note from the original department nearly three weeks later saying “We understand that you’ve previously shown interest in Natural Resources Canada’s Emissions Reduction Fund” and shoveling a press release at us. Though not alas any actual funds, even though this NRCERF or whatever insiders call it has, apparently, three quarters of a billion dollars to hurl about. Money that used to be yours but, alas, is still not ours.

With all that cash, you’d think they could do their own research. Whereas instead the bottom line here, with all due respect to the harried, underfunded, overworked and underappreciated communications staff of two different departments, is that nobody knows where the Minister got that number or, if they do know, they are too embarrassed to say. It is not because of his deep study of the matter. It is not because of his well-informed and dedicated staff of nearly 5,000 NRC employees.

They just made it up, or grabbed it off the Internet, and lurched toward a decisive policy of doing something or another to make it stop. Just as they promised at COP26 in Glasgow to stop financing oil and gas projects, foreign or domestic. (Oddly, in the past Canada has given billions of dollars to the Mexican government-owned Pemex, aka Petroleos Mexicanos and also Brazil’s Petrobras. I mean why not? What the heck.) It repeated a pledge in the federal Liberals’ election platform. But they don’t appear to know how much they give, or how, or why, or how to stop it.

Your tax dollars at work.

Previous PostIt's just weather
Next PostA year unlike all the others

2 comments on “Just the facts, methane”