There has understandably been a lot of attention paid to the devastating tornadoes that hit the US northeast over the past week. We know what the alarmists and politicians say the science says, but what does the science itself say? At her “Climate Etc.” blog Judith Curry provides an excellent roundup of the topic, covering not only the overall assessment statements of the IPCC but also comments from tornado experts who find themselves bombarded by media requests for gotcha quotes on a highly uncertain topic. She notes: “Fortunately, there is no sign that the number or intensity of the most violent tornadoes (EF3+) is increasing. However, tornadoes are becoming more tightly packed within outbreaks, and there are longer stretches in between, leading to more variability from quiet to violent periods and vice versa.” Likewise the 2017 US National Climate Assessment (p. 263) observes: “Since the 1970s, the United States has experienced a decrease in the number of days per year on which tornadoes occur, but an increase in the number of tornadoes that form on such days.” To rub it in, she quotes from the latest AR6 that “attribution of certain classes of extreme weather (eg, tornadoes) is beyond current modelling & theoretical capabilities”. Anyone claiming the story is simple or the science is settled is, well, spinning the truth into a vortex of growing intensity.

Curry quotes one writer saying that there has been an eastward migration of tornado tracks, and that the occurrence of tornadoes in December is not unprecedented, indeed some of the worst such events in modern history occurred in December months in the 1950s. Grand Climate Inquisitor Michael Mann of course weighed in, tweeting a chart showing declining counts of violent tornadoes and blasting it as heretical denialist misinformation or blockheadedness not scientific discussion. 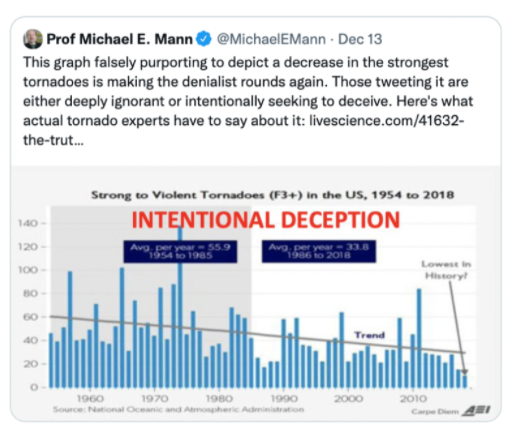 Curry seeks to calm the winds by pointing out that the graph is an updated version of one that can be found on the NOAA website. She also shows some charts by meteorology student Chris Martz, including the one below of December tornadoes in the US since 1950, again making clear that December tornadoes are not uncommon: 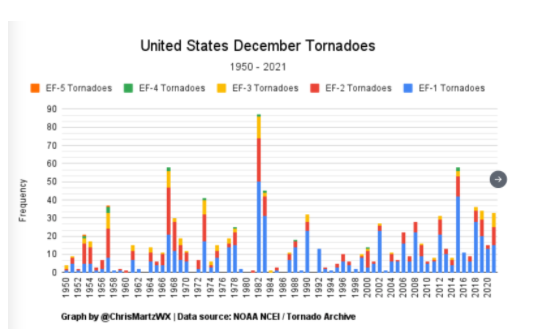 It is also notable that prior to the late 1980s there was no Doppler radar so many small tornadoes were not counted, a topic Curry goes on to explore of which Mann must be aware.

Curry then cites an analysis by Greg Goodman who reconstructed tornado counts back to 1950 using an adjustment for the pre-Doppler era to fill in unobserved storm events. The result shows all categories of tornado numbers rising from 1950 to a peak in 1975, then declining thereafter through the present. The conclusion was:

The post 1975 period marks the beginning of the late 20th century warming which IPCC has attributed mainly to anthropogenic effects (AGW). If there is a need to hypothesise a link between “global warming” and the frequency or intensity of tornadoes in USA, it would be that there have been less events in all major categories during this warming period. There has been no significant change in the distribution in storm severity as temperatures rise and recent warmer decades have seen notably less activity than the earlier post-WWII cooling period.

So maybe there is a connection between warming and tornadoes: more warming might mean fewer of them. If that hypothesis is verified, scientists may eventually tell us. But we have no faith that alarmist politicians will be interested in listening to the science.