From CO2Science: Four decades ago when the potential impacts of rising atmospheric CO2 on the biosphere were only just beginning to be studied, model projections imagined a dark future with widespread ecosystem destruction in consequence of skyrocketing temperatures and increasing weather extremes. Fast forward to the present and science has largely rebutted all of the alarmist projections in this regard. In fact, detailed observations at regional and global scales have confirmed what thousands of field and laboratory studies have demonstrated – that rising atmospheric CO2 concentrations enhance terrestrial ecosystem productivity (for proof of this statement, see the multitude of reviews CO2Science has posted in its Subject Index over the past quarter century under the heading Biospheric Productivity on this page). Yet despite these observational confirmations, model-based studies have – with little exception – continued to project a future of vegetative demise. The study of Martens et al. (2020) bucks this long-standing trend.

As their contribution to this topic, they utilized a dynamic global vegetation model (DVGM) to simulate the impacts of climate change and elevated CO2 on plant carbon stocks in Africa through the end of the 21st century. For climatic impacts, they incorporated two representative concentration pathway scenarios (RCP4.5 and RCP8.5), which they ran with or without enabling plant-physiological CO2 effects (i.e., CO2 fertilization).

As indicated in Figure 1 below, without incorporating CO2 fertilization the RCP4.5 model runs predicted regions of both increases and decreases in aboveground biomass, though the area of increases prevailed over the area of decreases. However, the situation worsened in the RCP8.5 model runs. Without incorporating CO2 effects areas of decreasing aboveground biomass prevail over areas showing an increase. Consequently, in this worse-case climate scenario the future of African terrestrial ecosystem productivity looks pretty bleak.

However, the situations reverses itself when the model runs include the physiological benefits of CO2 enrichment. As also shown in Figure 1, both RCP climate scenarios predict an “appreciable carbon sink for Africa by the end of the 21st century” when the fertilization effects of CO2 are incorporated into the simulations.

This reversal of fortunes is further noted in Figure 2, which depicts the mean total aboveground carbon in Africa over the 21st century under both RCP emissions scenarios, with or without including the impacts of CO2. When CO2 effects are ignored, the RCP4.5 model runs project there will be little to no change in African vegetation over the next several decades of the 21st century. RCP8.5 projections, on the other hand, indicate Africa will quickly transition into a carbon source by the 2050s, ultimately witnessing a 5.1 Pg of carbon loss by the end of the century. But when CO2 fertilization effects are included the outlook once again skews positive: mean total aboveground carbon rises by a respectable 36% (RCP4.5) and a commanding 65% (RCP8.5) by the end of the century!

Commenting on their work, Martens et al. write the “projected change in aboveground biomass was driven primarily by CO2 fertilization and showed that assumptions concerning CO2 effects [i.e., incorporating them or not incorporating them into the models] caused the strongest variability in future projections.” And that is an important take away from this study - that the positive impacts of CO2 enrichment on 21st century African terrestrial biomass are more than capable of overpowering any growth retarding impacts of future climate, even under the worst-case RCP8.5 scenario. 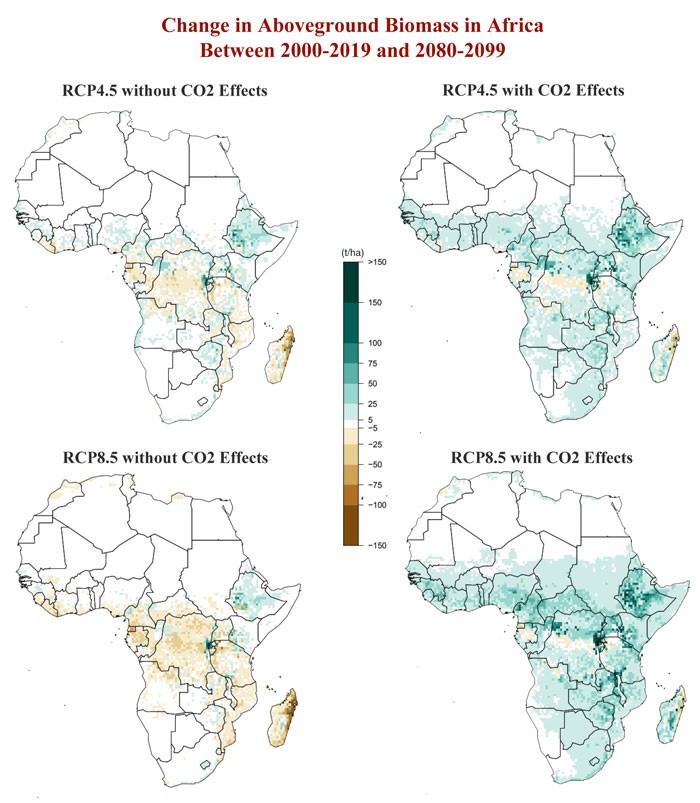 Figure 1. Simulated change in aboveground biomass in Africa between 2000-2019 and 2080-2099 under RCP4.5 and RCP8.5, where the aboveground carbon dynamics and plant-physiological effects of rising CO2 are included in the model. RCP = representative concentration pathway for climate forcing. Source: Martens et al. (2020). 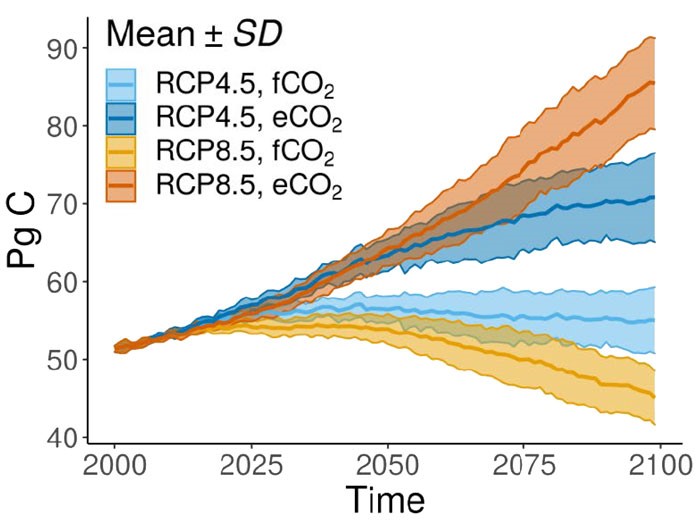