So about those glaciers

We deniers may have all the money. But those plucky alarmists sure manage to produce some slick videos, including the one where “Physics Girl” attempts to show us that “Glaciers Are Disappearing Almost As Fast As You Can Ski Down Them” and tumbles into an intellectual crevasse.

One thing climate alarmists seem to lack is a sense of self-awareness. How many times can someone say that in their particular area disaster is striking “faster than scientists anticipated” while maintaining that the science is settled and absolutely beyond question? Then hire a professional skier and helicopter him into breathtaking locales in BC to prove the glaciers are gone by skiing down them even though deniers have all the money thanks to sinister oil companies. (We don’t ourselves have experience with helicopter charters but it seems to cost over $1000/hr. Send us more money please. Right now we’d struggle to charter a bicycle.)

The stunt here was to measure the meltwater and then use it to fill a swimming pool to make the matter comprehensible at an everyday level. Which it doesn’t, because such units mean nothing on their own. What matters isn’t what’s coming off a glacier, or going on, it’s the balance between them. Oh, and whether current melt levels are exceptionally high or whether in fact glaciers have been retreating since long before man-made CO2 became a thing, because if so you’re just engaging in a lavish PR stunt. Complete with forest fires and heat domes.

Alarmists are so vociferous about “the science” being settled and on their side that they have largely abandoned the onerous task of actually checking even basic facts. One of us had the good fortune to visit Alaska’s Glacier Bay National Park back in 2013 and was given a cheery brochure about the scenery and aboriginal lifestyles that inadvertently revealed that the fertile river valleys were scoured brutally by glaciers that came roaring down after the end of the Medieval Warm Period, extended out into the Pacific by the mid-18th century, and then retreated pell-mell by… by… what’s this? 1880? Yes. 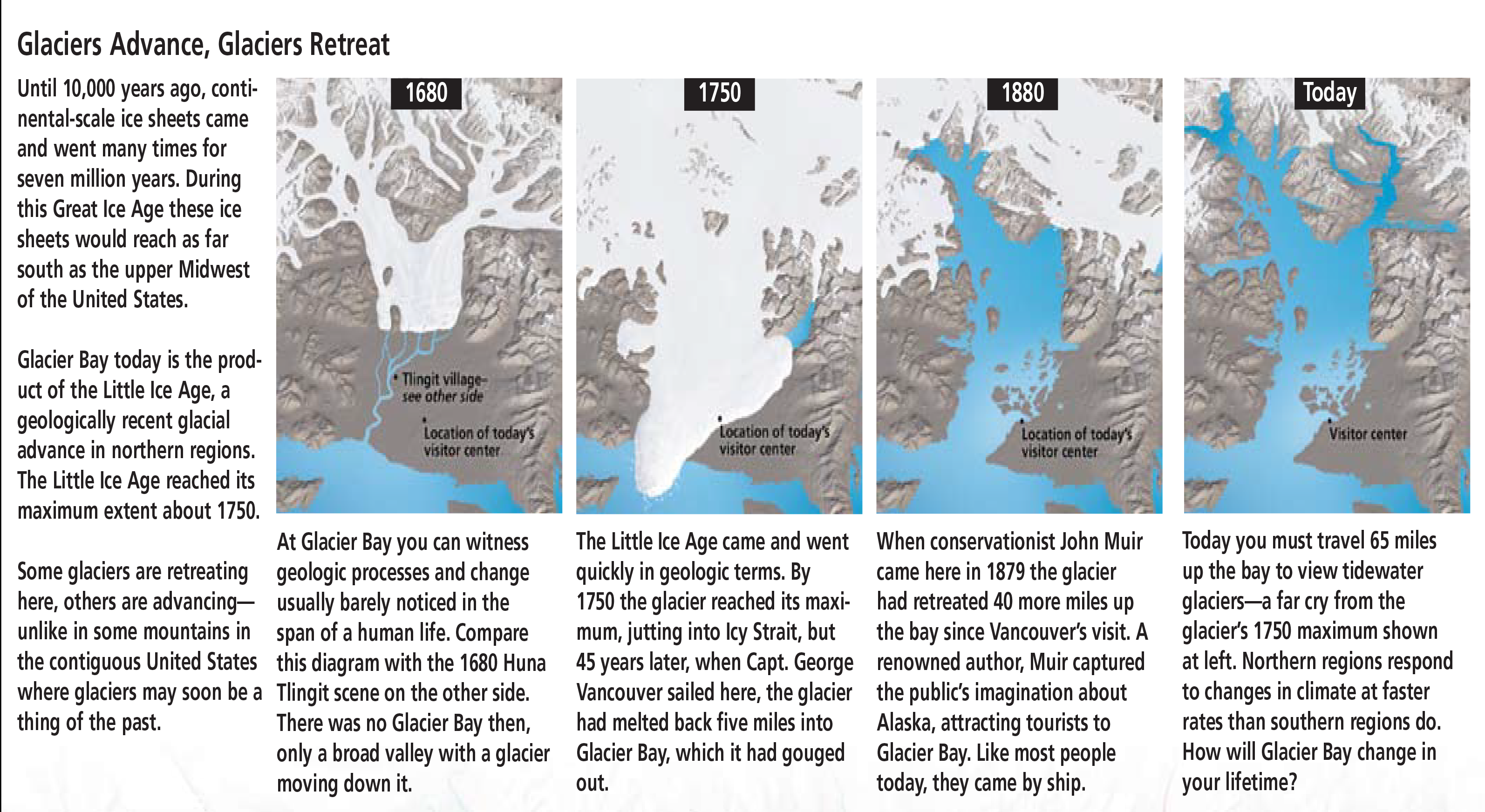 They were back at the top of the fjords by the Congress of Berlin (aka 1878), having alas removed the fertile alluvial soil and forcing the locals to adapt to far less pleasant conditions long before man-made GHGs became a “thing”. And in his 1923 study of Glacier Bay Professor William Copper of the University of Minnesota noted that Captain Vancouver had reported Glacier Bay filled with a mountain of ice when he sailed past in 1794, yet by 1920 it had retreated 60 miles inland almost to the end of Torr and Muir inlets. What’s happened since is just the tail-end of the great retreat of the last 270 years so it cannot possibly be the result of something that happened 50 years ago. And if Physics Girl had been measuring the melt in 1830 there’s no telling what she would have said. Possibly something we can’t print.

Paul Homewood also made this point recently, repeating something he’d done in more detail in 2019, including quoting a classic Victorian travel guide from 1899 that said of Alaska “Old residents insist that the climate is changing. That the summers are warmer and drier. The rapid retreat of all the glaciers during even 20 years is offered as another proof.”

Not, be it noted, that he or we are climate “deniers” in the sense of denying that climate changes. That title goes to people like Al Gore, Bill McKibbin or John Kerry who really have denied climate change, claiming in the face of all the evidence that temperatures were stable until the 20th century.

In An Inconvenient Truth Gore says “The places where people live were chosen because of the climate pattern that has been pretty much the same on Earth since the end of the last ice age 11,000 years ago.” Likewise McKibben, quoted by Alex Epstein in The Moral Case for Fossil Fuels: “Just like us, our crops are adapted to the Holocene, the 11,000-year period of climatic stability we’re now leaving… in the dust.” And in his infamous Jakarta speech on February 17, 2014 then U.S. Secretary of State John Kerry upped it to millions of years (while claiming a child could understand the science he was busy mangling) “For millions of years, literally millions of years, we know that layer has acted like a thermal layer for the planet, trapping the sun’s heat and warming the surface of the Earth to the ideal life-sustaining temperature, average temperature of the Earth has been about 57° Fahrenheit, which keeps life going.”

Such ignorance did not prevent him from being appointed President Biden’s climate “czar”. But it shows the danger of complacent orthodoxy: by stifling opposition to your point of view, or ignoring it, you can end up mentally lazy and believing preposterous nonsense and nobody manages to warn you.

We “deniers”, by contrast, maintain based on actual evidence and in the face of sustained if often absurdly ill-informed criticism that climate is in constant flux and that, moreover, the warming that caused such panic in the late 20th century was in fact part of a process that has been going on for hundreds of years. Thus Homewood’s 2019 article includes a US Geological Survey map of Glacier Bay showing that it was all Glacier and no Bay as recently as 1760, with ice right out to the “Icy Strait”. By 1857 it was half-clear, and by 1892 the ice was confined to two tributary inlets. By 1912 the West Arm was basically ice-free and by 1948 so was Muir Inlet.

Homewood returned to this point a few days later with “A Potted History of Glaciers” in which he included the point that “As glaciers recede in Alaska, scientists are finding the remains of forests previously buried by the ice.” As they are in Patagonia. And he warms the cockles of our own hearts by quoting Brian Fagan’s The Little Ice Age and saving us the trouble of doing so again. The point being that yes, Physics Girl, there was a Little Ice Age and before it a Medieval Warm Period and no they were not regional blips. As Homewood adds, “Glaciologists also know that similar advances were taking place on glaciers all around the world, including Alaska, Greenland, the Canadian Rockies, South America, the Caucasus, the Himalayas and China.” Then he quotes Fagan on the spectacular advance and then retreat of the Franz Joseph glacier in New Zealand, which reached its peak between the late 17th and early 19th centuries just like those in the European Alps. Weird, huh?

He concludes this history with the following apt summary unknown to modern know-it-all alarmists with their garden hoses, swimming pools and helicopters:

“The modern day retreat of glaciers is part of a much longer natural cycle. Indeed, we find evidence of that cycle going back long before the Middle Ages. Lamb, for instance, claims that glaciers in the Alps and Norway were advancing between 800 and 400BC, reaching an extent almost as great as during the Little Ice Age. They advanced again around AD600 to a similar position as before. In between times, of course, the same glaciers also retreated, both during the Roman Warm Period and the Medieval Warming Period. Whether man-made warming has played any part in modern glacial retreat, we know that:
* Most of the retreat since the 18thC occurred before any possible impact from humans.
* Glaciers were smaller than now in the Middle Ages
* There is nothing unprecedented or alarming about the current state of the world’s glaciers
* All of this is common knowledge amongst glaciologists.”

Unfortunately one of the remarkable things about climate alarmists is the manner in which, from the deep well of their own ignorance, they splash not knowledge but confusion onto the public. Thus Physics Girl’s idea was to see if the meltwater from a glacier could fill a pool as fast as “JT” could ski down it, whereas it would take 19 days with a garden hose. Which is very revealing of absolutely nothing.

In fact in the hour it took JT, skiing then hang-gliding, the melt apparently filled “22 Olympic-size swimming pools”. And he replies “Wow! That’s fast.” See? We’re all going to die. But what is it “fast” compared to? The rate a century ago? The rate at which mass is being added to the glacier? The rate at which a monkey with a wooden leg could kick the seeds out of a dill pickle? Without a basis for comparison it’s a vacuous simulacrum of information dressed up with slowmo graphics of a really good skier on some really bad slopes.

In a particularly egregious piece of unwitting misdirection Physics Girl also warns that “If all of the glaciers on our planet melted, sea levels would rise by 230 feet. That’s the height of a 16-story building.” Like bummer man. But she does not give any reason to suppose that they might be doing so. She doesn’t even mention that it is only ice on land that matters because sea ice is already displacing water, let alone that most of the land ice is in Antarctica (nearly 10 times as much as on Greenland and an estimated 61% of all fresh water on Earth) and that, as Pierre Gosselin notes, with h/t to Die kalte Sonne, far from melting that continent is getting colder and has been for decades.

Antarctica just had its coldest winter since proper records began 60 years ago, and at one station, the Neumayer one, temperatures have fallen by 3°C since 1985. “This is not getting reported by the media in Germany in any way, shape or form. We can just imagine the blaring headlines if the trend instead had shown 3°C of warming. You’d have a thousand German journalists descending on the South Pole by now.” Instead even in grudgingly acknowledging it CNN kicks off its story “In a year of extreme heat, Antarctica’s last six months were the coldest on record.”

Meanwhile, shunning such awkward details, Physics Girl pours out clichés faster than a melting glacier. Attribution science gets a serious shot of steroids, or amphetamines, with the solemn declaration about the Pacific Northwest heat wave last June that “scientists actually say that without climate change, this type of heat dome would not have happened.” No they don’t. Some say it would have been less likely. But nobody who studies the matter is that categorical.

She also mixes up what might be looming with what is already here with her claim that communities are already being affected by rising sea levels. Again on steroids, with big banners saying “ALREADY MILLIONS OF PEOPLE ARE BEING DISPLACED BY RISING SEA LEVELS” as well as “THE RATE THAT GLACIERS ARE MELTING HAS DOUBLED IN THE LAST 20 YEARS”. And she adds “Now, of course, glaciers always melt in the summer, but what’s happening is that they’re melting at unprecedented rates and faster than they can be replenished.” But she doesn’t say which glaciers or how she knows.

Verdict? Guilty as charged. “Out of all the science experiments, this one’s probably the most surprising and shocking. It really underscores that things have to change.” You ain’t fooling. Starting with bogus videos like that one.

Previous PostBut not for thee
Next PostSo about those penguins

6 comments on “So about those glaciers”