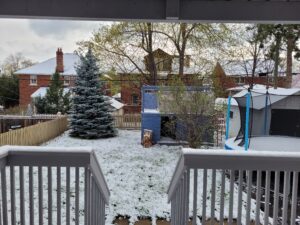 On Earth Day in Ottawa we woke up to the deepest snow cover we’ve seen on April 22 since records began in the chilly 1950s. Well OK. Tied for deepest. With 2020. And across Europe and elsewhere low or even record low temperatures are being recorded while in much of the United States it’s hard to see the thermometer for all the snow. The Washington Post is reporting that “A cold April is breaking records and delivering rare snowfall so deep into spring.” If the headline were “A hot April is breaking records” and if the story said 80 million Americans were under heat alerts instead of “At least 80 million Americans were under frost or freeze alerts from the National Weather Service, with temperatures some 25 degrees below normal in spots” the Post would have treated it as vindication of the Earth Day gab-fests on stopping global warming. But at some point someone’s going to have to admit that climate change is more complicated than a linear relationship between rising CO2 and everything melting, right?

Perhaps now would be a good time. Because the phenomenon is, how shall we put it, global. Alaska set several records while Saudi Arabia also saw snow… and presumably many of its inhabitants wondered what it even was. Frost has devastated France’s wine grapes and prompted the declaration of an “agricultural disaster” by their Agriculture Minister on April 8, while across the channel they’ve had the coldest spring in eight years. And if you think eight years is nothing, across the Rhine Germany is seeing its coldest April since the First World War, its second-coldest since Bismarck was Chancellor (and since records began) and its snowiest since the Berlin Wall fell.

Now we at CDN are the last people to deny that weather fluctuates. Which means it is possible that a long-term secular warming trend could have a cyclical pattern laid atop it leading to cold periods inside a warming period. But the people who kept saying five of the hottest years ever happened in the last three or whatever it was have wilfully trampled such subtlety under foot, insisting that it just keeps getting hotter so the debate is over. Which surely means now it is time for them to admit that, even if their theory is right, the evidence requires them to make some modifications in both its substance and its harshly dogmatic tone. Doesn’t it?

Robert L. Bradley Jr. of the American Institute for Economic Research recently told an anecdote about Julian Simon, the libertarian and wild-eyed optimist who won a very famous bet with doomsayer Paul Ehrlich over resource depletion. “At an environmental forum, Julian Simon once asked: ‘How many people here believe that the earth is increasingly polluted and that our natural resources are being exhausted?’ After a roomful of hands shot up, Simon then asked: ‘Is there any evidence that could dissuade you?’ Encountering silence, he followed up: ‘Is there any evidence I could give you – anything at all – that would lead you to reconsider these assumptions?’ After more silence, Simon answered: ‘Well, excuse me. I’m not dressed for church.’”

Arguably this retort was unkind to those who have come to faith via reason. But it’s very fair to put Simon’s question to climate alarmists now: What evidence would persuade you that there is not a linear relationship between human CO2 emissions and global temperature?

If the answer is silence, well, excuse us but we’re not dressed for winter. And apparently we should be.