From CO2Science: Approximately 2344 Gt of organic carbon is stored in the top 3 m of the planet’s soils, representing a global carbon sink exceeding that contained within the atmosphere and all of the world’s terrestrial vegetation combined. However, climate change may alter the stability of soil organic carbon (SOC) stocks in the future. Climate models, for example, generally predict that rising temperatures will lead to enhanced decomposition of SOC due to increased temperature-driven mineralization, which combination of events is projected to release large amounts of carbon (in the form of CO2) into the atmosphere where it will act to further enhance planetary warming. But is this model-driven hypothesis correct?

Dalal et al. (2021) recently investigated this topic by directly examining changes in SOC and soil total nitrogen (STN) stocks at a pristine (natural and undisturbed) subtropical study site in Queensland, Australia (24.81°S, 149.80°E), that was dominated by C3 vegetation (Acacia harpophylla, Casuarina cristata and Eucalyptus cambageana). Over a period of 33 years (1981-2014) soil samples were collected here to a depth of 0.3 m by the same instrument and instrument operator using identical protocols so as to ensure comparable results in the data across the period of analysis. Across the monitoring period, mean annual precipitation experienced no trend, whereas mean annual temperatures rose by an average 0.028°C per year, or 0.89°C from 1981 to 2014. Consequently, prior to their analysis of the data the authors surmised that SOC stocks “would decrease over the 33 year experimental period given that rates of SOC decomposition increase at elevated temperatures, and that any increased productivity from CO2 fertilization would not be sufficient to counter the increased rate of SOC decomposition.”

So why didn’t rising temperatures result in a decline in SOC stocks? Given that precipitation remained unchanged at the site the authors posit “this net increase in SOC stocks may be due to the increase in CO2 from 338 ppm to 395 ppm contributing to increased biomass productivity.” In particular, they cite CO2-induced increases in root:shoot ratio that is commonly observed in CO2 enrichment studies, which tends to enhance fine root production in the soils. What is more, the enhanced STN observed may have further increased the CO2-induced stimulation of belowground root production and/or slowed down microbial respiration (i.e., reduced SOC decomposition), either of which processes could help explain the increased SOC stocks observed here.

Regardless of the likely mechanism(s) responsible, it is clear that the increase in the SOC stock observed at this pristine subtropical site is in direct opposition to model-based theory, which suggests it should have decreased in response to the approximate 1°C rise in temperature over the 33 year period of study. 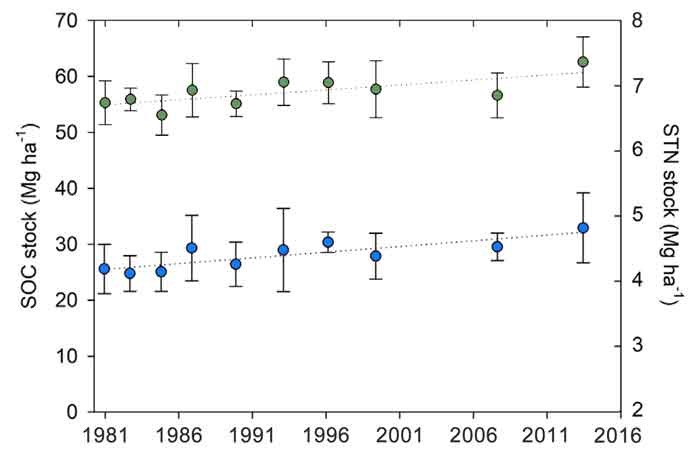 Figure 1. Changes in soil organic carbon (SOC, green circles) and soil total nitrogen (STN, blue circles) stocks at a depth of 0 to 0.3 m at a natural brigalow vegetation site in Australia over a 33-year period. Data are the arithmetic mean of three replicates ± standard error of the mean. Adapted from Dalal et al. (2021).

Previous PostDare you to post it on Facebook
Next PostThe response of sorghum to elevated CO2, water stress and nitrogen availability