So about that Miami

For some reason the claim that Miami is going under is trending again. Unlike the reality. Indeed the whole notion of accelerating sea level rise is under extreme downward pressure, not least because of a new paper that, after a determined attempt to push attention levels to record lows, finally blurts out that in the UK there was a considerable increase in the rate of sea level increase around the turn of the century. But it was the last century, after which it settled down and has not accelerated. And if the Atlantic isn’t getting deeper on the eastern side, it probably isn’t on the western side either.

We do not blame the paper for being dry in its methodology. Too many academics seem to equate readability with superficiality as a general principle. But in this politicized field in particular it’s increasingly dangerous to come right out and say “Hey, the seas aren’t rising faster”.

Since Willis Eschenbach and Watts Up With That suffer no such inhibitions, Eschenbach charts both the trends from 1830 to 1890 then 1890 through 2010 and the year-by-year rate change. Here’s the latter. 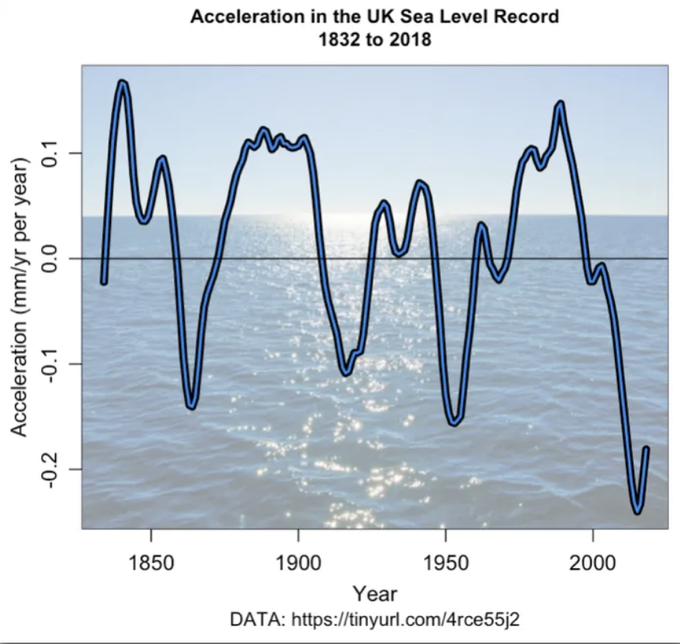 Oh my. It doesn’t take a PhD in math or “climate science” to see that it’s a pretty variable phenomenon that is trending down not up especially after about 1990 when it’s meant to be rising relentlessly prodded by the CO2. Stupid ocean.

Stand by for a new announcement that global warming meant declining rates of sea level rise and they knew it all along. They just didn’t tell us. Or themselves, which is why they bought all those mansions by the beach. Or something.

Previous PostOh darn
Next PostSo about that freezing

2 comments on “So about that Miami”