Sneaking up on you

In his new book Fake Invisible Catastrophes and Threats of Doom, Greenpeace co-founder Patrick Moore makes a remarkable point about current environmental concerns that is easy to overlook but, once stated, is both obvious and problematic: “the great majority of scare stories about the present and future state of the planet, and humanity as a whole, are based on subjects that are either invisible, like CO2 and radiation, or extremely remote, like polar bears and coral reefs. Thus, the vast majority of people have no way of observing and verifying for themselves the truth of these claims predicting these alleged catastrophes and devastating threats.” To be sure, as somebody once said, even paranoids have enemies, and some colourless, odorless and tasteless things can be deadly like, say, carbon monoxide. But it is curious the extent to which we are meant to take these things on faith. Especially as when somebody does go and check, the polar bears are still there and so are the coral reefs. 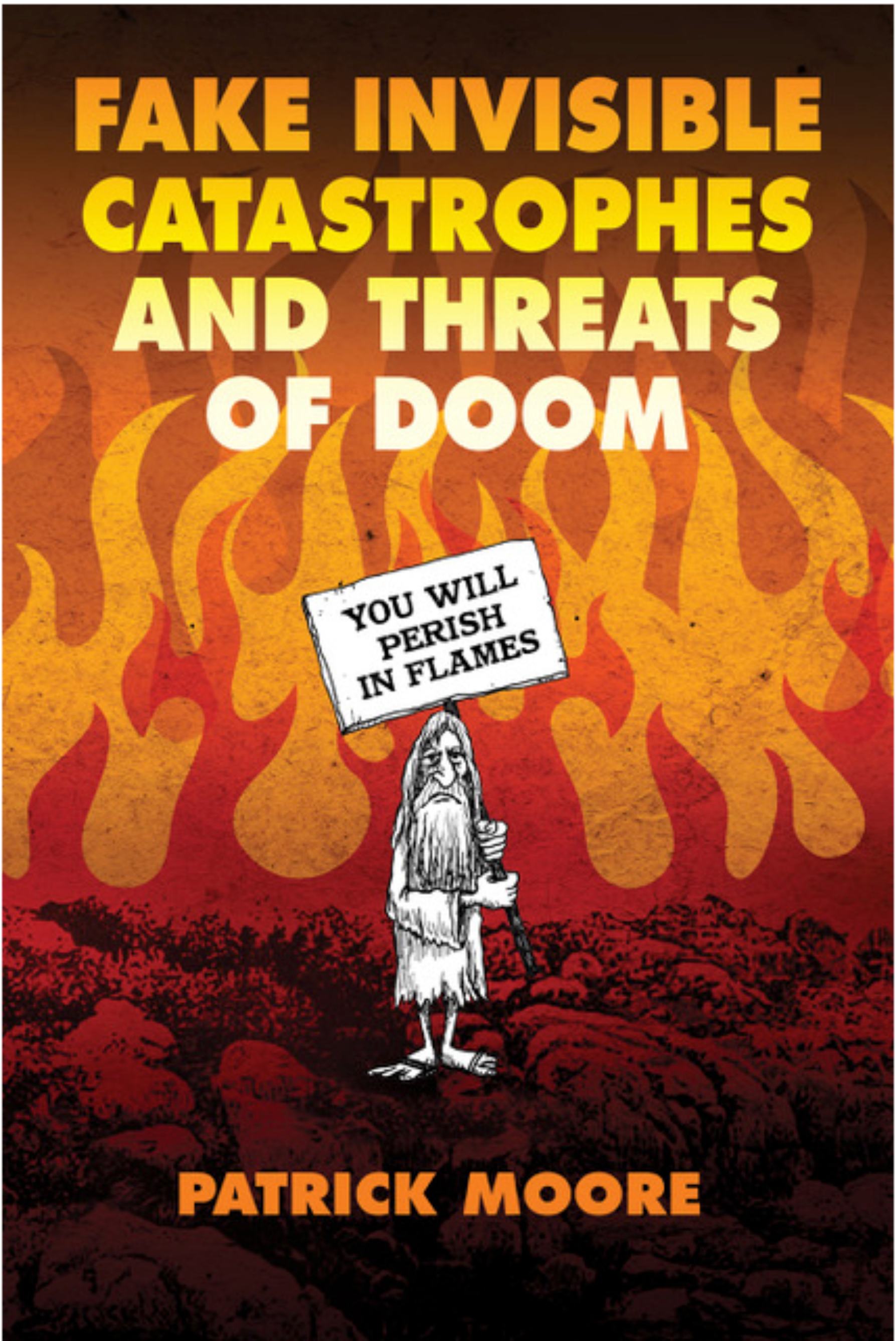 Whenever Moore’s name is mentioned people jump up and try to assassinate his character by saying he’s lying about being a founder of Greenpeace. But in fact it is Greenpeace that is lying; they acknowledged him as such on their website until 2007 at which point they dropped him down the memory hole but, alas, the Internet archives things. And this tendency to hit below the belt without hesitation brings up another point he emphasizes in the book: “When one studies these ‘narratives’ of invisible and remote circumstances, it is hard to avoid noticing that the purveyors often stoop to ridiculing and shaming, and likewise exhibit an unwillingness to discuss the allegations in a civilized manner. It is virtually impossible to engage in debate as they usually dismiss those who question their narrative as a skeptic, liar, denier, or of being in the pockets of ‘big oil.’ And if the alleged skeptic has employment, these narrators will work underhandedly to have you removed from your livelihood or position.”

It is not how one would like to see policy debates conducted. And while unfortunately it is by no means now confined to those skeptics who question orthodoxy on climate, it is especially common in that area. Despite which Moore forges ahead on a range of environmental topics by no means exclusively focused on climate though of course as he notes environmental issues nowadays tend to get linked somehow to global warming, as do a considerable number of issues not obviously related to environment like, say, the antibiotic-resistant fungus Candida auris.

One of the second-hand warming issues he addresses is coral reefs. Moore observes that in April 2016 headlines around the world screamed that the Great Barrier Reef was 93% dead, a number positively radiating sober scientific certainty. “But the careful reader would be hard pressed to find the origin of the number 93 percent as there is no record of it other than in headlines.” Remind you of anything? Right. The 97% “consensus”.

Moore also observes that the term “bleaching” conjures up images of industrially produced chlorine devastating marine life. (And the Greenpeace decision that precipitated his departure, to demonize the chlorine so often found in bleach, and we mean demonize quite literally as “the devil’s element”, and try to get it banished from the universe even though it is vital to life and also medicine plus it’s half of salt which some people notice is very common in that “salt water” thing oceans are known for.) But in fact the discoloration phenomenon in question has nothing to do with dumping manufactured chemicals into the ocean. Rather, it’s a question of the inherently colourless animal “polyps” in coral reefs temporarily ejecting their symbiotic phytoplankton, a sign of stress but by no means of morbidity.

The Great Barrier Reef eventually recovered and some news outlets admitted it. But as Moore says, most people are still convinced it is moribund. After all, it’s a long way away and most of us couldn’t afford to go there even if travel were permitted.

As noted, the book is not about climate change. But in addition to noting its supposed connection to everything from coral reefs to polar bears and trees, it does have one chapter specifically dedicated to it including a list of absurd supposed consequences including “Skinnier pigs” and also “Fatter horses”. Which sound like things you can see just by driving past a farm but, as Moore points out in keeping with his opening theme, most of them are not statements about things that have happened so you could go and see them. They are predictions about things that will or might and while we will all eventually visit the future, or some of it anyway, we can’t go take a look then come back and report. So they are indeed invisible and inaccessible.

There’s a great deal more in Moore’s book and we urge you to read it even if you normally take a contrary view. It’s very well written and well informed and, as John Stuart Mill rightly said over a century and a half ago now, as the Little Ice Age was winding down, “He who knows only his own side of the case knows little of that.” Especially because the orthodox view on climate is so different including in its view of evidence.

It is instructive to compare Moore’s perspective with this outburst from the New York Times’ “Climate Fwd.” year-end Dec. 30 2020 roundup: “This year was a tumultuous one on the climate front. It started with huge wildfires in Australia and ended with historic blazes in California. Over the course of the year, communities around the world were left reeling from extreme heat, record storms and rising seas. It was also something of a turning point: For many, it brought home the realization that the effects of climate change are not decades away. They are already here.”

Climate Fwd. does admit that at some point evidence is needed. And perhaps quietly worries that it’s been lacking. But when it stokes these various wildfires it says the thing that is not, because globally as in North America wildfires have been declining for decades not increasing. As for these “communities around the world… left reeling”, rather than being frightened by remote scare stories, where are they? Where, indeed, are these effects of climate change that “are already here”?

Headlines are catching fire, to be sure. But, to give Moore the last word here, “in science, direct and tangible observation is fundamental. We must “observe” the situation with our senses of sight, smell, taste, hearing, and/or touch. Or, observations can be made using an instrument such as the microscope, telescope, Geiger counter, voltmeter, X-ray image, etc. Upon observing a new phenomenon, we must repeat the observation under the same conditions numerous times in order to ‘verify’ that it is a repeatable occurrence and not just a fluke. It is only then that we should make an announcement of our hypothesis and challenge other scientists to ‘replicate’ and test our results.”

Previous PostNot your father's Oldsmobile
Next PostKerry saves the debate

10 comments on “Sneaking up on you”