From CO2Science: In providing the rationale for their study Lonthair et al. (2020) say that “determining species resilience is a crucial aspect of understanding the impacts that ocean acidification and other climate change-induced environmental changes will have on future marine ecosystems.” And so it was that this trio of researchers set out to examine the robustness of the orange-spotted grouper (Epinephelus coioides) – a “fast-developing economically important teleost species” that is critical for aquaculture in the Asia-Pacific region – to future projections of rising CO2.

The experiment was conducted under controlled conditions at the Institute of Cellular and Organismic Biology, Academia Sinica, Taipei, Taiwan. Fertilized grouper eggs were exposed to one of three seawater pCO2 levels (~650, 1500 or 3100 µatm CO2) whereupon the researchers analyzed embryo survival along with three sub-lethal impacts (total length, yolk consumption and heart rate 48 hours post fertilization). They also utilized gene expression analysis to determine if there was any CO2-related influence on the teleost’s acid-base regulation.

In discussing their findings the researchers say their work “provide[s] evidence that a fast growing and economically important estuarine-dependent species, the orange-spotted grouper, exhibits no clear detrimental effects of ocean acidification when exposed during the most sensitive early life stages.” More specifically, as shown in Figure 1a, there was no impact of CO2 on embryo survival. And as shown in Figure 1c and 1d, the two traits analyzed to determine if there was a change in energy burden at higher CO2, i.e., total length and yolk sac area, also were unaffected by ocean acidification, a finding the authors say “supports the premise that this species may have a level of intrinsic resilience.” Lonthair et al. further report the orange-spotted grouper “maintains acid-base regulatory transporters in a high enough abundance to correct for ocean acidification without a transcriptional change,” noting that they “saw no alterations in gene expression in any of the acid-base regulatory transporters that [they] measured.”

Heart rate, in contrast, was enhanced at the higher pCO2 exposure levels (Figure 1b), however the authors report it remains unknown as to what, if any, impact this change may have on fish health and development in later life stages. Nevertheless, when considering all of the data they collected, Lonthair et al. conclude “our study has shown that the estuarine-dependent orange-spotted grouper show no clear detrimental effects of ocean acidification exposure in the most sensitive life stage,” which finding they add “is consistent with the hypothesis that species that have evolved in habitats with natural fluctuations in pCO2 may have intrinsic resilience to the impact of ocean acidification.” 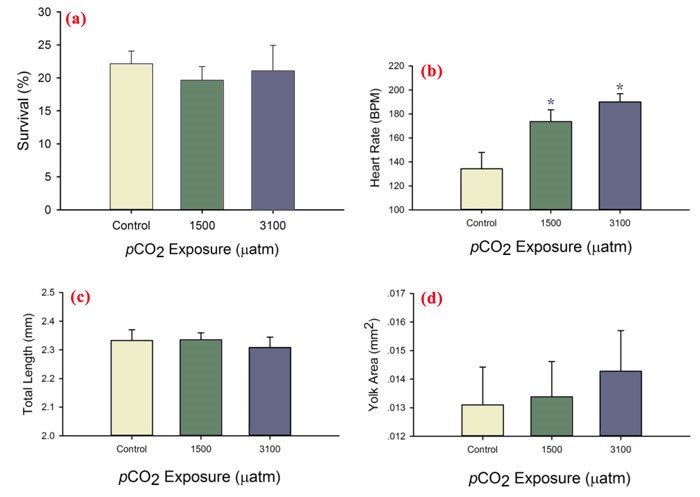