From CO2Science: Because nearly all plants on Earth are carbon-limited, rising levels of atmospheric CO2 are having a profound impact on plant physiology, development and growth. This CO2 fertilization effect, as it is often called, is well-established in the scientific community, where thousands of laboratory and field experiments have demonstrated increases in plant productivity and water use efficiency in response to higher concentrations of this key trace atmospheric gas. Additionally, more and more researchers are demonstrating these benefits extend well beyond the site level - where individual plant species are often studied - to regional and global scales of estimates of net primary production, gross primary productivity (GPP) and/or intrinsic water use efficiency (iWUE). The latest study to do so comes from the work of Ueyama et al. (2020).

What this team of 25 researchers did was to “present a new quantification of the CO2 fertilization effect at the ecosystem scale during the past two decades based on eddy-covariance flux measurements across arctic, boreal, temperate, and tropical ecosystems at the global scale.” In discussing their findings Ueyama et al. write they “found that rising atmospheric CO2 (29.0 ppm between 2000 and 2014) enhanced GPP at a rate of 0.08% /ppm at the global scale, which was equivalent to an increase of 0.16% per year” and they add this enhancement “is approximately 60% of the current increasing trend in global GPP … indicating that the CO2 fertilization is the most important process driving the current increase in the global GPP” (see Figure 1a). What is more, they note that warm tropical forest regions benefited the most from CO2 fertilization, exhibiting both the highest percentage GPP enhancements per ppm rise in atmospheric CO2 (Figure 1c) and the greatest absolute increases in GPP (Figure 1d).

Another significant finding presented in the study pertained to transpiration. Here, the scientists report the CO2 fertilization effect reduced plant stomatal conductance, which effectively depressed global transpiration rates over the past two decades by approximately 16% (Figure 1b). Hence, not only has the planet’s vegetative productivity increased since the year 2000 (evidenced by the rise in GPP), its increase has occurred under no additional expense of water, evidenced by the reduction in transpiration and improvement in plant water use efficiency over the corresponding two-decade period. What makes these findings even more astounding is the fact that they have ensued despite climate alarmists' projections (and claims) to the contrary of widespread global vegetative decline, which they ironically assert should be happening in consequence of rising atmospheric CO2. They could not have got it more backwards! 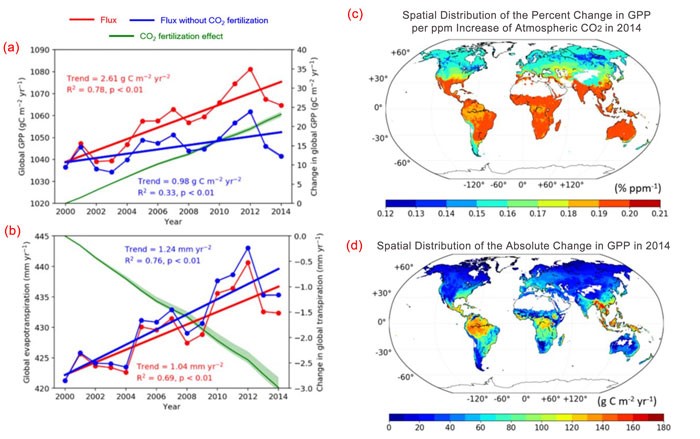 Figure 1. Global mean GPP (Panel a) and evapotranspiration (ET, Panel b) over the period 2000 through 2014 based on upscaling of eddy covariance fluxes and change in the fluxes associated with rising atmospheric CO2 concentration. Spatial distributions for relative changes in GPP (unit of % ppm-1) are shown for the year 2014 in Panel (c), whereas those for absolute change (unit for g Cm-2 yr-1) in GPP are shown in Panel (d). Source: Ueyama et al. (2020).