Then they came for your gas stove

While sneering at you for worrying that they might take your stove, Canary Media says there’s nothing to see: “A study found that gas stoves cause asthma. A federal official suggested the government might take action. The right wing freaked out… there is no federal gas stove ban in the works.” The thing is, though, it’s how these things start. A dubious claim is put forward, concerns are ridiculed, the claim mutates into settled science and suddenly the ban hammer comes down. Hence the Washington Post story that started the ruckus writing: “Last month, Commissioner Richard Trumka Jr. announced that the agency would issue a request for public comments by March on possible regulations on gas stoves, which he said ‘could be on the books’ by the end of this year”. Which sounds like a ban is to follow.

The Economist, after mocking “How gas stoves became part of America’s culture wars” and blaming it on conservative gun nuts, intoned that:

“The American Gas Association, a trade group, publishes recipes on cookingwithgas.org. In sponsored social-media posts, influencers rave about their gas stoves. But the appliances, which emit nitrogen dioxide, particulate matter and other pollutants, also carry environmental and health risks, including asthma. The dangers can be mitigated with good ventilation, yet indoor pollution is not heavily regulated. Burning gas also releases greenhouse gases, including carbon dioxide and methane.”

Got it? One paper suggesting a statistically insignificant and patchy correlation based on a survey of other papers turns into “carry… health risks, including asthma”. Voilà. Settled science. And since it also releases greenhouse gases, well, why take chances?

Scientific American also weighed in, or leapt on the bandwagon, insisting that the science was settled decades ago that gas stoves cause breathing problems. Plus:

It declared a ban improbable. Meanwhile Canary Media declared bans all but inevitable:

“Some communities have already shifted away from natural-gas use and gas stoves in homes and businesses. Berkeley, California – arguably the epicenter of the ‘electrify everything’ movement – banned natural gas in new buildings starting in 2019, becoming the first city in the country to do so. Since then, large cities including San Francisco and New York City have passed similar bans, with almost 80 other cities across the nation following suit.”

No one should be surprised that governments that can casually ban gasoline cars can also take out gas stoves. And Canary Media itself, which certainly hates methane on climate grounds, then proceeded to explain why gas stoves needed to be banned:

“The outcry over outlawing the appliance comes on the heels of an RMI study linking the use of gas stoves in U.S. homes to almost 13 percent of the country’s cases of childhood asthma. The research found that these appliances emit pollutants that have been linked to respiratory problems including asthma, such as benzene, nitrogen dioxide and carbon monoxide. Released in late December, the study compares the use of a gas stove in the home to risks associated with secondhand-smoke exposure. (Canary Media is an independent affiliate of RMI.)”

That last bit in parentheses is to let you know that just because Canary Media is related to the Rocky Mountain Institute (RMI) which sponsored the study and is where the lead author works, they’re independent so you can trust their objectivity.

Just like you can trust the New York Times “Climate Forward” which explained that “cooking fuels change all the time” before saying gas is bad:

“Regular readers of Climate Forward will know that by gas, I mean what is often called ‘natural gas,’ whose main ingredient is methane, a potent greenhouse gas responsible for global warming.”

“At least 21 Republican-led states have responded with pre-emptive bans on city gas bans, according to a tally by the Natural Resources Defense Council, an environmental advocacy group. All this at a time when the Biden administration is offering ordinary consumers billions of dollars in tax rebates to switch from polluting gas appliances to electric ones.”

Boo! Polluting. Sounds like something bad. Worth banning. That piece also shared this pearl of wisdom: “The gas industry doesn’t like gas bans.” And no sum is too high to pay for such insights.

Still, somewhere in all this there must be some science, right? Brown University economist Emily Oster, who runs a blog dedicated to providing parents with analysis of data on pregnancy and childrearing, went over the analysis and came away unimpressed. After surveying the conflicting lines of evidence she concluded:

“We know that gas stoves emit nitrogen oxides and that, in general, those are not good. We know that air pollution, in general, is bad for respiratory symptoms, including asthma. So it seems very plausible that there is some link here. However: the magnitude is likely small. In most of the estimates, it’s small. And, beyond that, we do not see the kind of smoking gun in any of these data that would suggest a really consistent link.”

And after graphing the relationship between asthma incidence and the rates of usage of gas stoves across the US she noted that it is not what you’d expect if gas stoves were the driving cause: 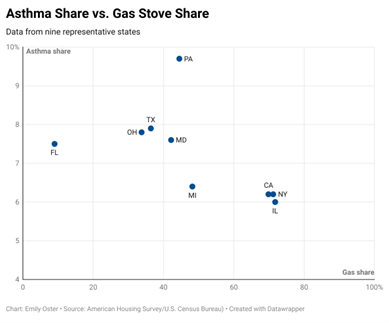 So no settled science. Similarly the authors of the Doomberg substack, and if they list their actual names it’s somewhere we couldn’t find them, go deeper into this issue after noting wisely that with tens of thousands of “academic journals” in the world the fact that they claim to be “peer reviewed” is no guarantee of anything. They write:

“The researchers did no actual scientific experiments. Instead, they performed what’s known as a ‘meta-analysis’ of hundreds of other scientific studies, selected a few dozen they deemed relevant, and then performed contorted statistical analyses on data reported in those reports to arrive at the falsely precise ‘12.7 percent’ number now confidently declared by the media. Here’s a direct quote from the Materials and Methods section of their report: ‘First, we sought to update the effect-size estimates by identifying peer-reviewed manuscripts published subsequent to the most recent meta-analysis. We searched PubMed using keywords: ‘gas cooking and children’ OR ‘gas appliance and children’ OR ‘unvented and children’ OR ‘gas heating and children’ OR ‘gas heater and children.’ After including only manuscripts of human studies published in English since 4 January 2013, 357 studies remained for possible inclusion. The title review identified 27 manuscripts as potentially pertinent. Full manuscripts (n = 27) were independently reviewed by co-authors; none reported new associations between gas stove use and childhood asthma specifically in North America or Europe.’”

As opposed, they add, to a 2013 study in The Lancet Respiratory Medicine that directly surveyed over half a million school children from 47 countries and found a link between open fire cooking and asthma but none to gas stoves.

The authors of the new study weren’t exactly subtle in hyping their result-like object either. “‘It’s like having car exhaust in a home,’ said Brady Seals, a manager at RMI who co-authored the research.” Nor was the Washington Post, which noted that:

“Under the Clean Air Act, the Environmental Protection Agency has the authority to regulate outdoor air pollution from cars, power plants and other sources. But the agency lacks the power to regulate indoor air pollution from gas stoves and other appliances. For decades, advocates have urged the Consumer Product Safety Commission to fill this regulatory vacuum that persists inside people’s homes.”

Which sure sounds like the usual activist-journalist nexus pushing for governmental action.

As Alex Epstein argued, after noting that the lead author of the paper is “an anti-fossil-fuel activist” and that “Families have the right to incorporate any real science about gas stoves as they judge best”, that the big issue is that “Asthma is a cluster of symptoms that researchers do not have a clear causal picture of”, that rates of asthma in American states do not correlate with rates of gas stove ownership and:

“CDC data shows that between 1980 and the mid-1990s asthma rates almost doubled, despite a significant decline in air pollution. This is an anti-correlation that contradicts the narrative that asthma is mainly caused by pollution.”

Which, again, will never do. Instead stand by for gas-stoves-cause-childhood-asthma to enter the “everybody knows” category and be repeated until you have trouble drawing relaxed breaths too.

Next PostFrom the people who plan to control the weather

15 comments on “Then they came for your gas stove”